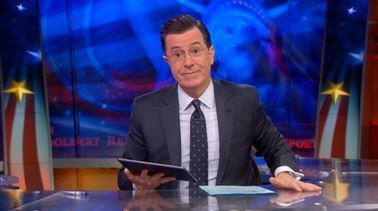 UPDATE: The Huff's Colbert segment indeed aired. Check it out right below. There's a lot of talk about sharks.


Huffman shared a bit about what ended up on the cutting room floor on his Facebook page:

Now that the Colbert show has run, I can tell you there were some really funny scenes that didn't make the cut. In one, he poured himself a huge glass (to the brim) of my homemade wine and started drinking it, saying he detected flavors of "liberal overreaching" and "projecting weakness to our enemies." In another, he made me play volleyball against him on a makeshift court in the hallway. We had a discussion about fugitive methane losses, which he called silent but deadly. And lots of marijuana stuff ended up not making the cut. It's interesting to see how they edited 2 hours of taping down to the final segment. Lots of fun!


PREVIOUSLY: Congressman Jared Huffman recorded a segment for the Colbert Report back in July, and has been teasing details about on his Facebook page since; apparently he was unsure when the show would air.

It looks like tonight's the night: If you've got cable TV, tune into Comedy Central at 11:30 p.m. to (probably) catch Huff on national TV. He apparently appeared in a "Better Know a District" segment, which "offers a humorous explanation of a different United States Congressional district in each segment and generally includes an interview with that district's member of Congress," according to Wikipedia. Huffman's district, as we all know, should provide plenty of fodder for the funny man.

When Huffman took to Facebook in May to ask his constituents if he should appear on the show, he got an overwhelmingly supportive response, including on commenter who wrote, "Prepare to meet your maker. I have yet to see one of your congressional colleagues look good after being manipulated by Stephen. It's funny stuff but usually at the expense of ones dignity. So yes of course, do it!"