Mills said McClain was defying officers orders and reaching for a replica handgun — a realistic looking BB gun — in his waistband when Linfoot opened fire, shooting a total of seven rounds, three of which hit McClain in the arm, chest, head and gluteus maximus.

“The events that took place in the early morning hours of Sept. 17 are tragic,” Mills said. “I have spoken with Thomas’ mother and I feel for her. We empathize with her and, to be frank, all of our hearts break for her.”

A few dozen reporters and law enforcement officers attended the press conference, which saw Mills give a fairly detailed account of shooting.

The chief said his department was conducting a surveillance operation to track down a wanted fugitive who was believed to be armed and dangerous and staying in the 1600 block of Allard Avenue the night of Sept. 16. Mills said officers initially planned to break down the door at the house where the fugitive was believed to be staying in what Mills called a “high-risk” plan, but Sgt. Brian Stephens revised the plan to have two officers watching the residence from the cemetery across the street while another officer circled the block in his patrol car.

As the officers waited for the fugitive to show up, Mills said they saw a car drop three people — including McClain — off next door at McClain’s cousin’s home. They went inside, Mills said, and McClain came out to the front yard a short time later. A blue ford pickup truck then parked across the street from the house, and Mills said McClain confronted the male driver as he got out. Mills said the man later told investigators that McClain accused him of selling drugs in the neighborhood.

Mills said officers watched as the man walked down the street to another residence and McClain returned to his cousin’s front yard, where he appeared agitated and to be “puffing up,” rolling up his sleeves. The officers then saw McClain “index” a gun in his waistband, Mills said, describing the action as a “subconscious” feel of the hand to check and make sure the gun was there. “The officers noticed this,” Mills said, clarifying that the officers didn’t actually see the gun at this point but noted the movement and were concerned that if the pickup’s driver came back there could be an armed confrontation.

The officers reported what they saw to Stephens, who directed them to stay put but asked the officer patrolling the block to drive by the residence, thinking it would cause McClain to go back inside, Mills said. The officer drove by slowly, Mills continued, but McClain didn’t retreat inside. Instead, Mills said, he waited for the patrol car to pass, then was seen by officers pulling the gun from his waistband and “cycling it” to pull a bullet into the chamber. Mills said this raised the threat, and Stephens decided to drive into the area to confront McClain. Mills said Stephens pulled up in his patrol car, illuminated McClain with its spotlight, got out and began giving “clear, concise commands.” The sergeant was standing about 12 feet in front of McClain, who responded to the commands by saying, “You don’t have the right to search me,” Mills said.

At this point, Mills said Linfoot — who was in his patrol car parked in a nearby alley — sped to the scene, as the two officers conducting surveillance in the cemetery also converged on foot. Initially, Mills said that McClain complied with orders from Stephens, who had him at gunpoint, holding his gun in a “high and ready” position, meaning it was raised and trained on McClain but that Stephens didn’t have his finger on the trigger or his sights set. When McClain raised his hands, the handle of the BB gun was clearly visible on his waistband, Mills said, prompting Stephens to say: “I see the gun. Don’t touch it or I will shoot.”

Mills said McClain, for “unknown reasons,” then began lowering his hands. The officers yelled again for him to raise his hands, Mills said, and McClain complied momentarily before again lowering his hands, dropping one to the handle of the gun on his waistband. Seeing this, Linfoot opened fire. Mills said forensic testing confirmed that all of the seven shell casings found at the scene came from Linfoot’s gun, but said Stephens told investigators he too was readying to shoot when he saw McClain grab for his gun but, by the time he was ready to fire, McClain was on the ground and no longer a threat. The chief estimated the entire interaction between McClain lasted about a minute, with the shooting itself over in two seconds. 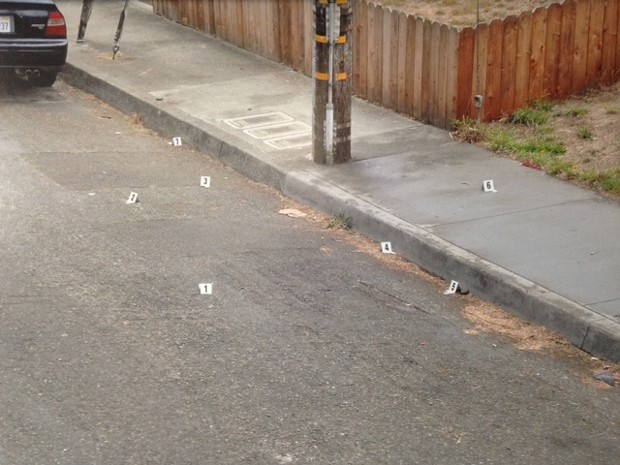 An autopsy conducted on McClain over the weekend determined one of Linfoot’s shots hit him in the outer arm, piercing his bicep, passing through and hitting him in the chest. This, Mills said, confirms that McClain’s arm was in a downward position and not raised when he was shot. “This demonstrates that the arm could not have been in the air,” he said.

Asked if Linfoot shot to wound McClain, Mills said that when officers decide to shoot they “fire to stop the threat. Whatever it takes to stop that threat. We fire until the threat is gone.”

McClain’s gun — a Co2 action BB gun replica of a Walther PPQ handgun that Mills said is almost identical to its real counterpart — never left his waistband, Mills said, adding that officers removed it as they handcuffed him following the shooting. The BB gun, Mills said, was not loaded.

Family and friends of McClain — who recently moved to Humboldt County from Fresno and was working with a local roofing company — have said he was hard of hearing and may have not understood officers commands. Mills said today that the 22-year-old did have a hearing problem but that he didn’t know the extent of it. As to whether McClain understood officers’ commands, Mills said he believes McClain clearly understood the situation he was in and was initially compliant. McClain’s family and friends have also indicated he was out drinking prior to the incident, but Mills said toxicology test results have not come back yet and declined to comment further.

Mills said dash cams from the two patrol cars on scene at the time of the shooting captured some footage — including Linfoot firing his weapon — but that neither captures McClain or his interaction with officers. EPD located three civilian witnesses to the incident — including two related to McClain and one with “pro police sentiments” — but detective Ron Harpham said he doesn’t believe any them saw the actual shooting. All, he said, offered conflicting accounts of what transpired.

Moving forward, Mills said the multi-agency Critical Incident Response Team investigating the case under the direction of EPD and the Humboldt County District Attorney’s Office will finish up its work and turn a full report over to the DA’s Office for review. The DA’s Office will ultimately decide whether it believes any of the officers involved violated the law. Mills said he will also conduct an internal review of the incident to determine if EPD policies were followed, and whether the policies themselves need revisions. Linfoot will remain on administrative leave until the process concludes, Mills said.

The chief met in person with McClain’s mother within days of the shooting and said he briefed her this morning on the information he was preparing to release.

During his press conference, Mills said there are those in the community that wish to vilify McClain and others who want to vilify the officers. The reality, Mills said, is that the officers made split-second decisions that are now being “evaluated in the light of day,” with the benefit of time, “in the comfort of offices and homes.” While saying EPD welcomes scrutiny of the incident, Mills said those involved — both the officers and McClain’s family — are left with a lifetime of impact.

“Decisions that are made in seconds will last for eternity,” he said. “Such is the case with police work.”

For more information on how the shooting is being investigated, see past Journal coverage here.

Editors Note: This story has been updated to correct the spelling of Brian Stephens' name.