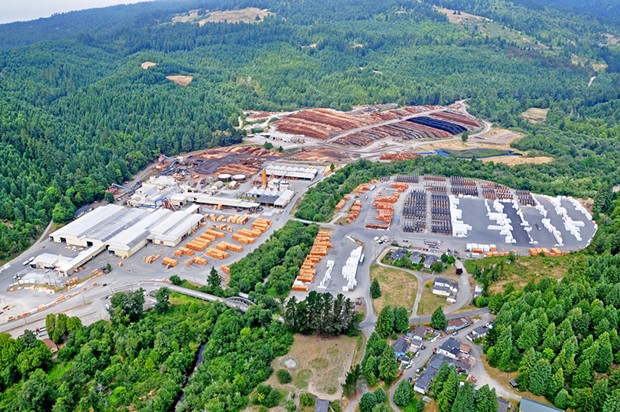 California Redwood Co., a subsidiary of Green Diamond Resource Co., has put its Korbel sawmill up for sale.

“In a recent meeting, company president Douglas Reed told employees it makes sense for the sawmill to be owned or managed by a company that has deep knowledge of Douglas-fir manufacturing and marketing for the California market,” says company spokesman Gary Rynearson.

In May, California Redwood Co. began exiting the redwood manufacturing and distribution business, with Reed saying in a news release at the time that the company had “not been able to achieve positive results for redwood lumber manufacturing and sales over the last several years.”

Parent Green Diamond began selling its redwood logs elsewhere, and the Korbel mill switched to just milling Douglas-fir lumber on a single-shift basis. California Redwood Co. also began selling off its remaining redwood lumber inventory, and its Brainard redwood remanufacturing facility along Humboldt Bay (between Arcata and Eureka) will close at the end of this month. The 76-acre Brainard site includes lumber drying yards, storage and manufacturing buildings and housed the company’s California corporate offices. Rynearson says the company is looking at different options for Brainard, including selling or leasing part or all of it.

Since May, 61 employees have been laid off as a result of these changes, says Rynearson — eight from CRC’s Humboldt operations, and the rest from its redwood remanufacturing facilities in Woodland and Ukiah. Twenty-four more employees will be laid off once the Brainard site closes, he says. And the Korbel sawmill employs 90 people now.

Rynearson says no price has been established for its Korbel site, but the company has taken some interested parties on tours.

George Schmidbauer, who owns a sawmill in Eureka, says he toured Korbel thinking he’d like to lease it and use the site for storing more logs — especially if he could get a long-term timber contract with Green Diamond. He wasn't interested in the sawmill. But now he says he’s dropped the idea of a Korbel operation altogether.

“We’ve been going through everything, and we just decided it doesn’t make sense to us financially,” he says.

Schmidbauer says he heard that Sierra Pacific Industries also toured the site. Rynearson wouldn't confirm or deny, saying it is inappropriate to disclose the name of any interested party.

Several calls and an email to Sierra Pacific Industries have not yielded a response yet.

Rynearson says that besides selling the Korbel mill, the company is looking at other options, including “curtailing operations on either a temporary or permanent basis.”

There’s a rumor that the mill would close in January if it hasn’t sold. But Rynearson says no timeline has been set for making such a decision.