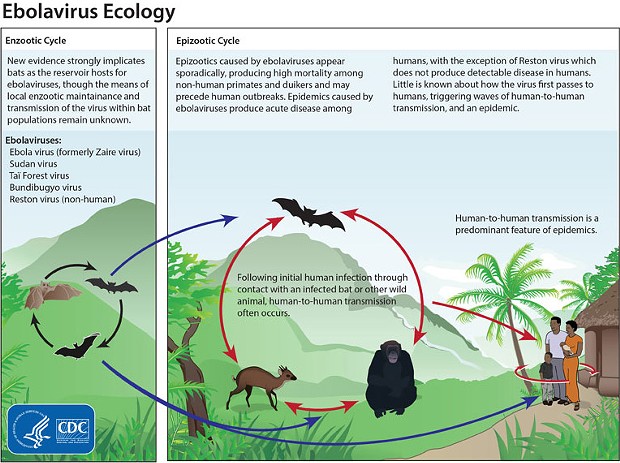 The ebola virus has killed more than 4,900 people and infected more than 13,500, mostly in West Africa, in this latest outbreak, according to the World Health Organization. Just four people in the United States have come down with
ebola: one who died (he contracted it before coming to the U.S.), two who contracted it after treating him in a Dallas hospital (they have recovered), and a New York doctor. still in treatment but now stable, who had been working with patients in West Africa.

Chances of someone getting ebola in Humboldt are slimmer than (insert ebola joke here; the Kim Kardashian one’s worn a bit thin.

Nonetheless, our local health officials are ready, they say.

“Our hospitals have been closely monitoring the Ebola situation and working with our teams to care for any potential patients and help prevent the spread of the virus,” said hospital spokesperson Leslie Broomall in a recent interview. “We are also ensuring that our clinicians have the screening tools and communications systems necessary to work together to properly screen patients not just for Ebola, but other infectious conditions such as MERS-CoV (Middle East respiratory syndrome coronavirus) and Avian Influenza.”

The hospital has posted ebola awareness signs in the emergency department and other areas, provided training for staff on personal protective equipment, and has conferred with other health care providers and organizations, and with local city officials, she said.

The county public health department checks for daily health alerts from the United States Centers for Disease Control and Prevention (CDC), which contain up-to-date ebola information, and disseminates them to local health providers. The department also looks out for the daily travelers list, compiled by the CDC’s Division of Global Migration and Quarantine, to see if a person coming from an ebola affected region has named Humboldt County as his or her final destination. Some states, including California, now require a 21-day quarantine (the maximum incubation period for the virus) for such travelers if they have been in contact with someone with ebola (i.e. if they're "high risk").

If a high-risk person slips through and then — against CDC advice to stay put and call the hospital — comes walking into the emergency room, or a doctor’s office, with a fever or other symptoms (vomiting, diarrhea)?

First, the patient would be isolated. Hospital staff in full protective gear would interview the patient to glean names of anybody he or she was in contact with, and draw a blood sample for public health staff to send to a lab for testing. The public health department would call the state public health officials and the federal CDC to report the possibility of an ebola case. If the diagnosis of ebola came back, the patient would be whisked off to one of the hospitals in the country selected to care for ebola patients (U.C. Davis has been designated in California). The county’s communicable disease staff also would track down every person the patient might have been in contact with after exposure to the virus, and monitor them for 21 days. If any of them report a fever, they have to call a hospital.

“Should there be a local [ebola] case, we will continue to do surveillance … and will be watching for any upticks in ebola-like symptoms,” he said.

The New York Times has a fantastic online fact page on everything ebola, which it updates daily. The CDC, of course, also has detailed information and updates. And if you want to get navel-gazey about ebola jokes (which we'll leave you to snuffle out on your own, you sicko), and the occasional tragic backfiring of such, Discovery's one place to start.