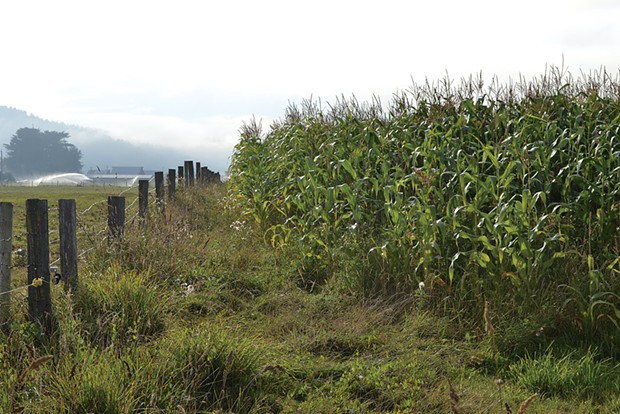 It's looking like P will win, as expected. The Pro-P folks no doubt are feeling especially relieved, as they considered Measure P the county’s last chance for local control over crop-related decisions following a new state law that takes effect with the new year.

“I think the real story is about AB 2470 and how the seed companies played fast and loose with the legislative process,” said Measure P spokesman Bill Schaser earlier this evening. “It appears that nobody had their eye on the ball."

Assembly Bill 2470, passed and signed earlier this year, alters California Seed Law to “prohibit a city, county, or district, including a charter city or county, from adopting or enforcing an ordinance on or after January 1, 2015, that regulates plants, crops, or seeds without the consent of the secretary.”

Measure P, if indeed it passes, goes into effect immediately.

With Measure P showing a weaker-than-expected start, the Pro-P camp is keeping mum so far. On the Anti-P side, former HSU President Rollin Richmond said after the first returns that he was pleased to see the "No" votes close on the heels of the "Yes."

"I’m a little surprised that it was that good," he said. "So maybe all of our attempts to educate some people had some success. But it’s not a testable hypothesis — like a lot of politics, I think."

The first returns are in and Measure P — the ban on GMO-growing in the county — surprisingly is not quite galloping toward passage as might be expected.

The last time Humboldt danced with the GMO devil — er, question — in 2012, 65.2 percent of county voters said yes to a state proposition (which failed statewide) that would have required labeling of genetically engineered foods (GMO stands for genetically modified organism). Heading into the election, it seemed quite likely that county voters would sweep Measure P in.

Measure P, the "Humboldt County Genetic Contamination Prevention Ordinance," would make it illegal to propagate, cultivate, raise or grow any organism (or its offspring) whose DNA — deoxyribonucleic acid, the stuff in cells that carries genetic information — has been altered by genetic engineering. It wouldn’t stop indoor-controlled genetic research or keep the doc from treating you, and you could buy, sell and distribute all the genetically modified food you want as long as it was grown out of the county. (You can read our story about Measure P here.)

But the night is young. Keep nibbling those corn chips and sipping those yeasty beers and wines, and hang in here for the updates.