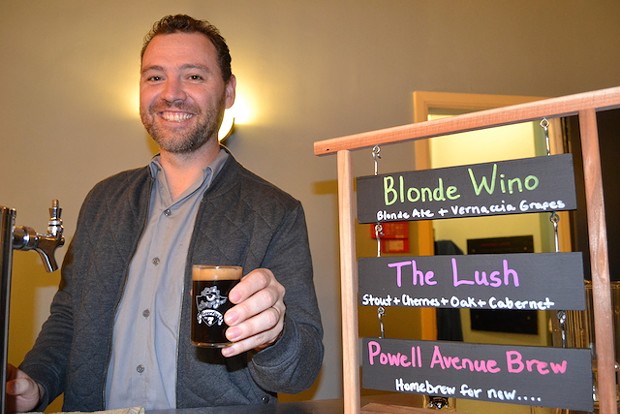 Justin Whitaker's booth, in the lobby, had first grabs at all of us rushing into the Eureka Theater for StrangeBrew Beer Fest 2014 last Saturday night. It helped that he was strategically placed across from Cypress Grove's cheese table.

"Everybody's going for The Lush," said Whitaker, who home brews with his wife, Eryn.

Truth, though: Everybody was going for everything. It was the world's slowest, most gentle riot. A glacially paced mosh pit. And other light-of-day-iffy descriptives that people come up with when they're drunk on the elbowing nearness of other happy people and on endless little shots of weird beer.

Inside the theater proper, you had to wade your way through the happiness to get from beer stand to beer stand. There seemed an especial madness around Mad River, with people taking extra swipes at the fried chicken pineapple garnish which was supposed to be paired with the Fingerlickin'. Not that the proprietors seemed to care. They were, like everyone else, all teeth (or beard with hidden, implied teeth). 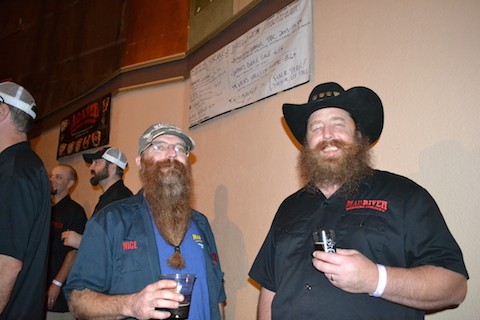 "And the Fingerlickin'," said Mark Nicely.

The Fingerlickin' was fizzy and crisp and so-fine with the chicken garnish.

Then there was the Cuban Embargo, a lime-laden hit with weed on the nose. Also good with the chicken garnish. And a mango number, very chicken-welcoming. And then, getting serious, the bourbony barleywine, a licker-lover's dive off the back porch into the best swimming hole. Good, strong, smooth — but having no truck with that chicken. And for dessert? Satan's Bake Sale. Like we always say, don't be afraid of mint-chocolate chip stout.

Over at Eel River, some were falling for a delicate number named the Citrarillocoe Clusterfuck. Others were going for the Sassi Hore II. We think they went for the name, then stayed for the taste.

"It's really hoppy but not too hoppy," said Zack Taylor, a forest service fuels specialist from Orleans, about the Cluster-eff. "Very floral but not too much bite."

Lagunitas, meanwhile, was very popular despite only serving bottled stuff (apparently there was a glitch with their strange-brew delivery).

Some men complained that there were "lots of lemony blondes here" at the fest, but these fellas' sourness wasn't catching. At least, not among those for whom every sip of anything was a delight.

"Let's see ... I think I like beer," said Denise Burns, a retired Sacramento teacher. She'd just been describing the subtle nuances of several brews, but never mind. "But my favorite beer is more." 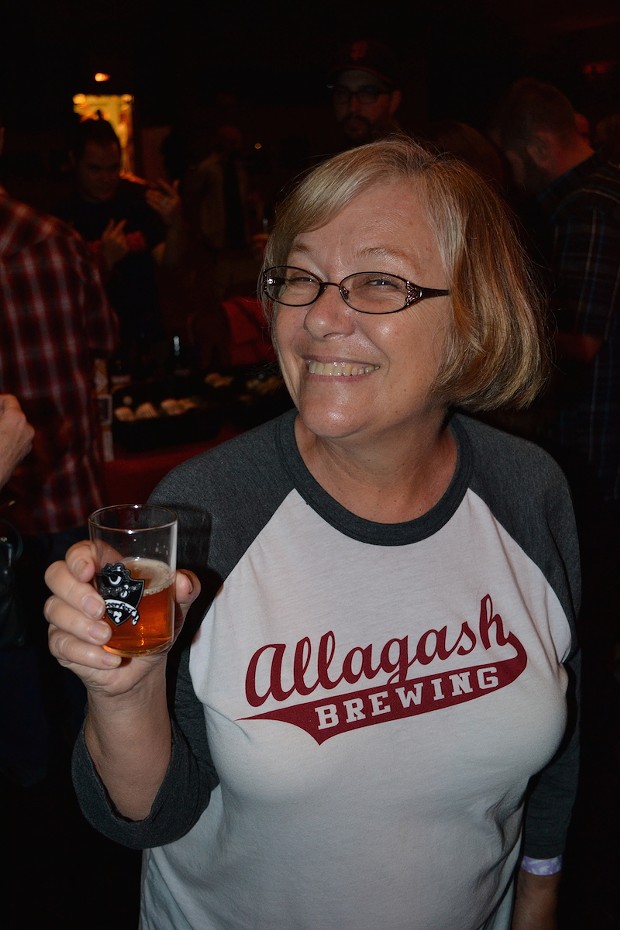 But OK, hold on, wait, hold your horses and, please, restrain your jumpy green long-legged insects. Sure, people were saying they loved Six Rivers' Donkey Punch, and it was delicious. But others pretended to swoon for the Dry Hoppered Ale — one made with mild-mannered grasshoppers, the other with spicy — which the Six's master brewer, Carlos ("everybody calls me 'Los'") Sanchez called a collaboration between himself and one of the brewery's chefs, Norby.

"He gets these Mexican grasshoppers," Sanchez said. "I dry roasted them and then put 'em in the keg and filled it up with beer."

The mild version of the hoppy (ha ha) ale was, um ... . And maybe the spicy version, with chili added, was super good, too, who knows?

"I loved the idea of making it for this event, but ..." admitted Sanchez. 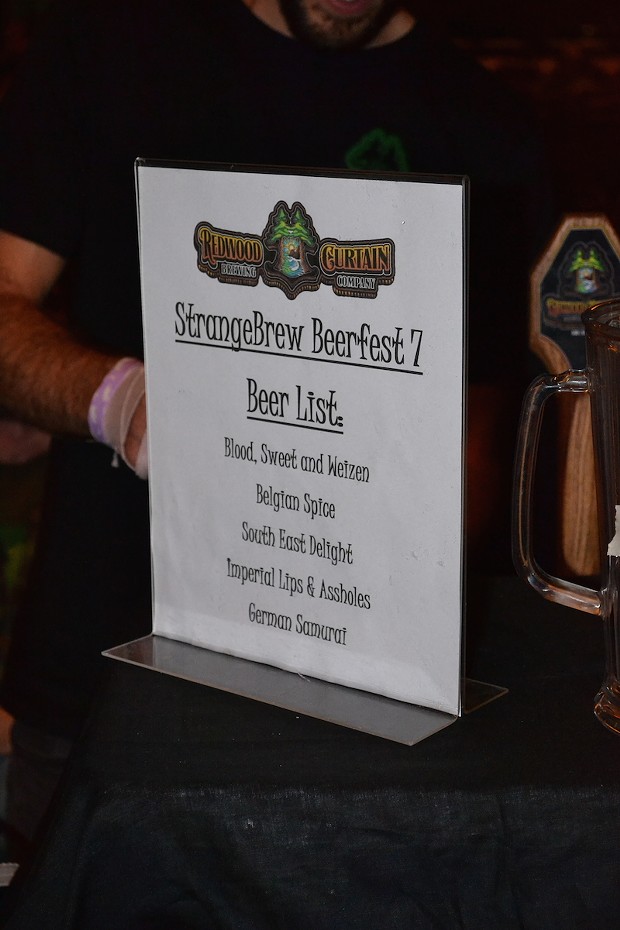 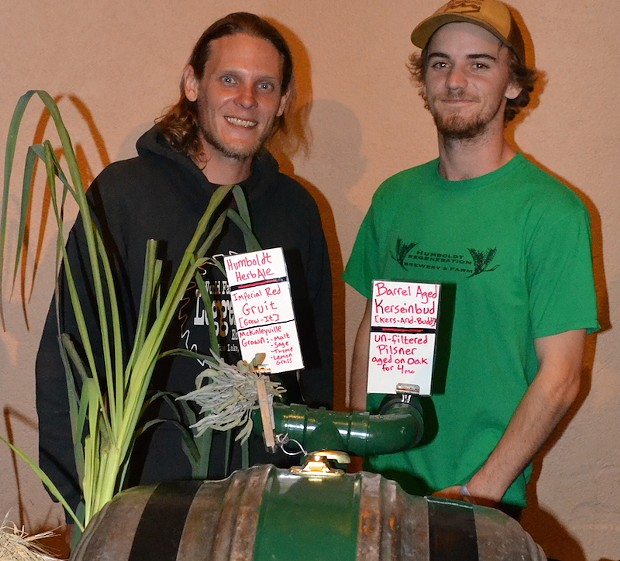 If StrangeBrew didn't make you happy, then that is sad. Unless you just didn't like the situation in the men's room.

Even so, maybe you should take a cue from Roy Sheppard, who just goes ahead and embodies Happy, whether he's drinking beer or not. 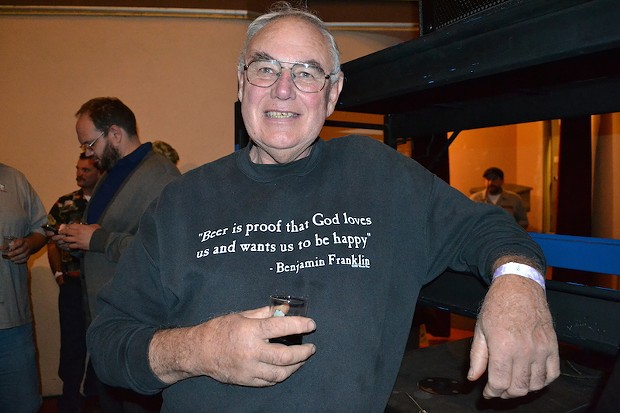