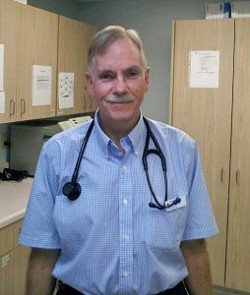 Humboldt County Deputy Coroner Roy Horton said an autopsy has been scheduled for tomorrow to determine the exact cause of death for Douglas Todd Pleatman, 59, an El Dorado County doctor who commuted by plane to work at the Garberville hospital. Horton said witnesses said they saw Pleatman’s plane circling the area near the Garberville airport before they heard the plane’s engines stop, at which point the plane collided with a tall fir tree, clipping off one of its wings, and crashed into the South Fork of the Eel River.

According to an Associated Press article, Pleatman was a champion skydiver, whose two true passions in life were skydiving and medicine. He lived in Cameron Air Park Estates, where “wide streets double as taxiways and oversized garages serve as airplane hangers,” according to the story.

Pleatman also worked as a physician at the Urgent Care Center of Folsom, whose webpage included the following bio:

Douglas Pleatman, MD graduated with honors from St. George’s University School of Medicine. He is board certified in both Family Medicine and Emergency Medicine. Having worked in both specialties he feels that Urgent Care is a great combination of both disciplines.

Dr. Pleatman is an instrument-rated private pilot, flies a Piper Comanche and is a member of the Sheriff’s Air Squadron. He is also a national champion skydiver and a former member of a professional air show team. He has been scuba diving in the South Pacific, Asia, the Caribbean and enjoys travel.