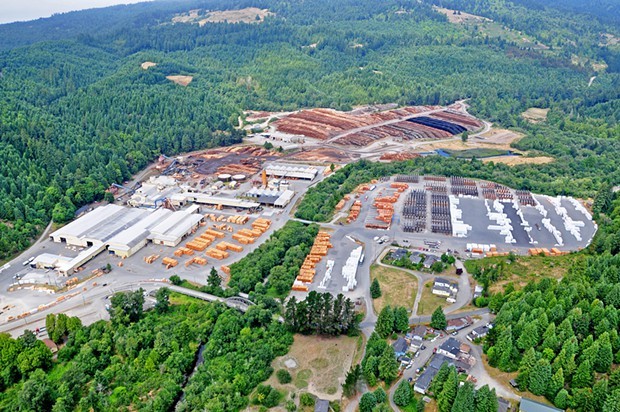 The California Redwood Co. announced today it's closing the Korbel sawmill in February.

The company, a subsidiary of Green Diamond Resources Co., has been trying to sell the mill since mid-October. Local blogger and Humboldt Bay Harbor, Recreation & Conservation District Commissioner Richard Marks posted yesterday on his site that he'd heard from an inside source that Red Emmerson's Sierra Pacific Industries was buying it. But in a news release, California Redwood Co. President Douglas Reed said only that there is no purchaser at this time "who would continue to operate the mill."

"This shutdown likely will end our company’s involvement in lumber manufacturing in California," Reed said. "“We have been manufacturing lumber in California for roughly half a century, so this decision comes only after a great deal of thought and with considerable sadness."

The company's been cutting back operations since May. About 90 people work at the mill now. Reed said employees who will be affected by the closure were notified today and will be provided employment counseling and other resources.

The company will continue to grow and sell timber.

California Redwood Company announced today that it intends to close down operation of itsKorbel, California sawmill in February 2015. Company president Douglas Reed said, “We havemade the difficult decision to move toward an indefinite shutdown of Korbel in February. Today, we provided notification to affected employees. For at least the next 60 days we will provide these employees with employment counseling and other resources while we prepare for the transition that lies ahead. This shutdown likely will end our company’s involvement in lumber manufacturing in California.”

Reed expressed the difficulty of making this decision and his gratitude to the employees of the Korbel facility. “We have been manufacturing lumber in California for roughly half a century, so this decision comes only after a great deal of thought and with considerable sadness. The shutdown in February will mean the loss of jobs for many skilled, valuable and loyal employees. I assure you, I don’t take these decisions lightly. Ultimately, though, this move will focus our attention on the core business of managing our California timberlands. Our co-workers who will be directly affected by this move have my sympathy and my gratitude for many years of commitment to operating and supporting the Korbel sawmill.”

Several weeks ago the company began actively marketing the Korbel mill to companies and investors that focus on lumber manufacturing. At this time, there is no purchaser that would continue to operate the mill. The company is hopeful that a proven lumber manufacturer will see opportunity in owning, operating and, perhaps, improving the mill with its superior location close to a substantial supply of timber.