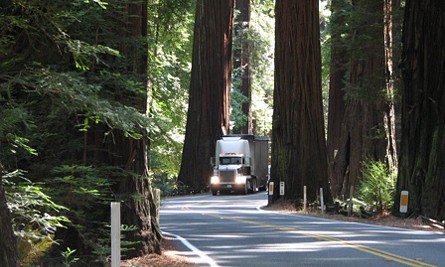 The curtain lowered this week on Caltrans' plan to widen U.S. Highway 101 through Richardson Grove — a plan so controversial it's inspired numerous lawsuits and even mass naked supplications down among the lush giants. But it could rise again.

In a news release, the Environmental Protection Information Center announced that "Conservation groups and local residents this week dismissed a lawsuit they filed in federal court in July in exchange for Caltrans abandoning the project approvals and agreeing to restart the environmental review if the agency pursues the project." EPIC called it an important victory.

Caltrans appears to be considering it a mere setback. In a news release, the agency confirmed it had withdrawn its finding of no significant impact on the project, but noted it is "conducting further environmental review ... ."

Caltrans proposed the project in 2007, citing — with agreement from some local proponents — a need to improve safety and make room so larger trucks can wind their way through. Opponents said there was no proof of a need to improve safety, nor of an economy stunted by a forced-reliance on shorter trucks — not enough to justify damaging roots of redwoods, some as old as 2,000 years and as big as 18-feet wide in diameter and 300 feet tall, they said. (Here's a two-part primer:Part 1 and Part II.)

SAN FRANCISCO— After years of opposition, Caltrans has rescinded its approvals for a controversial highway-widening project that would endanger ancient redwood trees in Richardson Grove State Park, along Highway 101 in Humboldt County. Conservation groups and local residents this week dismissed a lawsuit they filed in federal court in July in exchange for Caltrans abandoning the project approvals and agreeing to restart the environmental review if the agency pursues the project. Caltrans has been prohibited from any project construction activities by both a 2012 federal court injunction and a recent state court order.

“This is an important victory stopping a nonsensical project that would have done terrible damage to an ancient grove of giant redwoods in our state park,” said Jeff Miller of the Center for Biological Diversity. “We’ll be ready to go back to court if Caltrans decides to pursue the project, and it’ll have to completely start over on environmental review and the approval process.”

Conservation groups and local residents have now won three consecutive lawsuits challenging the “Richardson Grove Operational Improvement Project,” a proposal that would cut into and pave over the roots of many of Richardson Grove’s ancient redwoods, including some that are 2,000 years old, are 18 feet in diameter and reach heights of 300 feet. Caltrans has pursued this project solely to benefit passage for oversized commercial trucks.

“It’s time to investigate the huge amount of taxpayer money Caltrans has wasted pursuing this ill-conceived project,” said Natalynne DeLapp with the Environmental Protection Information Center. “Caltrans should have to answer why the agency continues to pour money down the drain pursuing a project that cannot be legally approved. Regulatory agencies and the public will not allow Richardson Grove’s ancient trees to be damaged.”

Background
Richardson Grove State Park, where tourists often first encounter large redwoods when heading north on Highway 101, is home to one of the last protected stands of accessible old-growth redwood trees in the world. The park also contains essential habitat for threatened and endangered species such as the northern spotted owl, and its creeks support runs of imperiled salmon and steelhead trout.

Caltrans first proposed the highway-widening project in 2007. Opposition to the project has grown substantially, led by the Save Richardson Grove Coalition, a diverse group of community members including economists, business owners, scientists and Northern California tribes with longstanding ties to the grove.

Caltrans claimed the highway-widening project was needed to accommodate large-truck travel, but acknowledged that the portion of road in question was already designated for larger trucks and did not have significant safety problems. The agency did not establish that the project was necessary for safety or would benefit the local economy. Smaller-sized commercial trucks have travelled through the grove for years to deliver goods to Humboldt County, and legislative exemptions have functioned to allow the passage of oversize trucks.

The plaintiffs first sued in 2010 when Caltrans certified inadequate environmental review documents and adopted a “finding of no significant impact.” In 2012 afederal court stopped the project, citing numerous errors in Caltrans’ mapping and measurement of affected old-growth redwoods and stating that the agency had been “arbitrary and capricious” in its use of what the court called ‘faulty data.” The California Court of Appeal in January 2014 ordered Caltrans to reevaluate the environmental impacts of the project under state law, finding that it had failed to fully assess impacts on ancient redwoods or provide measures to reduce potentially severe harm to the trees.

The latest lawsuit was filed earlier this year when Caltrans approved a “supplement” to its federal environmental review and renewed the project approval, while refusing to consider public concerns about the issues raised in the previous lawsuit. Caltrans failed to fix the numerous errors in mapping and measurement of affected old-growth redwoods that were cited by the federal judge in his order.
The attorneys for the plaintiffs are Philip Gregory and Pete McCloskey of Cotchett, Pitre & McCarthy, LLP; Stuart Gross of Gross Law; and Sharon Duggan, a long-time expert on environmental law.

State of California • Department of Transportation


CALTRANS RESPONDS TO DISMISSAL OF SUIT IN RICHARDSON GROVE CASE

Eureka – Caltrans has voluntarily withdrawn its Finding of No Significant Impact (FONSI), part of its federal National Environmental Protection Act (NEPA) documentation pertaining to the Richardson Grove Improvement Project. Based on this, the State of California filed a motion to dismiss a lawsuit filed by the Environmental Protection Information Center (EPIC), as it would be an unnecessary expenditure of judicial, attorney, and public resources for plaintiffs to pursue the federal litigation when further environmental review due to the state court writ may affect thefederal environmental document and/or determinations.

Caltrans made its decision to withdraw its FONSI on November 17, following the October 21 entry of the state court writ. Plaintiffs voluntarily dismissed the action after Caltrans informed them of this decision and after being served with Caltrans’ motion to dismiss.Caltrans is conducting further environmental review to comply with the State court order. If thatreview affects existing or previous environmental determinations, they will be addressed accordingly.