Our Man and the Father of the Nuclear Navy 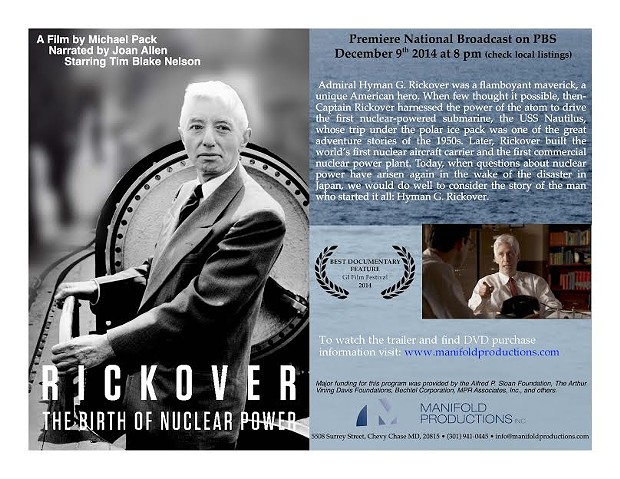 Tonight — very late tonight — on PBS, you can watch the premiere of a film about Admiral Hyman G. Rickover — you know, the fella who built the first nuclear submarine, first nuclear aircraft carrier and first commercial nuclear power plant.

Why? Because you'll learn about a complex, brilliant, controversial person considered instrumental in ending the Cold War. But also because Humboldt resident and retired Navy Rear Adm. Dave Oliver is in the film. Oliver served under Rickover for much of his 32-year Navy career, and he wrote a book about him calledAgainst the Tide: Rickover’s Leadership Principles and the Rise of the Nuclear Navy. It came out in November.

Oliver also has rubbed elbows with the current presidential nominee for Secretary of Defense, Ashton Carter. As he tells BookTrib writer (and Oliver publicist) Jordan N. Fenster, he and “Ash” go back to the Clinton days when Oliver was Principal Deputy Undersecretary of Defense for Acquisition, Technology and Logistics for that administration:

There’s more to Oliver’s story than all that – go read up on your neighbor and his book.

The documentary premieres around dessert-time elsewhere in the country. Here in Humboldt, you insomniacs can catch it at 1 a.m. (so, technically, tomorrow) on KEET TV Channel 13. It airs again on Thursday Dec. 11 at 7 p.m.; Friday Dec. 12 at 1 a.m.; and Saturday Dec. 13 at 5 a.m. (Get up, lazy bones! Ya think Rickover slept in?)