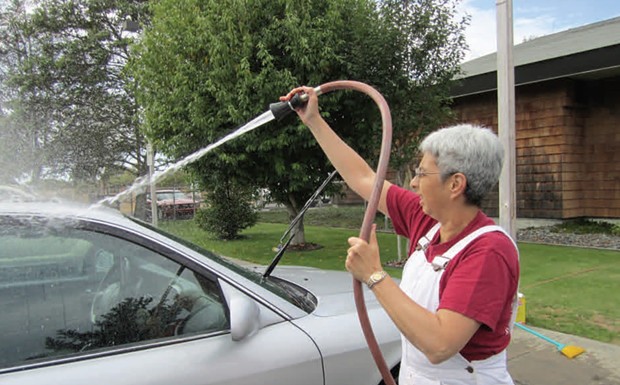 After 36 years with the National Weather Service — 20 of those as the meteorologist in charge at the Eureka Weather Forecast Office on Woodley Island — Nancy Dean has retired. Her last day was today.

“She’s been a great boss,” said Troy Nicolini on the phone this afternoon. “I feel really thankful. … I’ve had some crazy ideas over the years, and she’s always been really supportive. Every time I bring an idea to Nancy, she supports it and adds to it. She’s an extremely strong thinker, and that’s been the theme for the entire 17 years I’ve worked for her. She’s just a rock-solid, unbelievably hardworking person.”

One of the “crazy ideas” the local weather service ran with, along with other local partners, was tsunami preparedeness. As Nicolini writes in a news release:

“On the heels of the 2004 Indian Ocean tsunami, Nancy's team embarked on an aggressive approach to preparedness that used drills, tests, and exercises as the primary tool for ensuring that communities would respond correctly during a real tsunami. This was a significant departure from traditional preparedness activities that were based on presentations and written educational material.”

Nicolini said that, under Dean, the Eureka office took on other nontraditional roles, such as being the first weather service office in the nation to focus on educating the public about so-called sneaker waves (they don’t technically “sneak,” but you can be surprised by them if you don’t pay attention to the conditions in which they occur and don’t know what to watch for).

“We’re the first ones in the nation who started that,” said Nicolini, “even though sneaker waves are a major killer on the West Coast. And they’re the No. 1 weather killer here in our area.”

Nicolini outlined some of Dean’s and her staff’s accomplishments during her tenure in his news release:

“One of the outstanding categories of accomplishments for the Eureka office has been in the area of marine weather. Nancy's team made significant contributions to the advancement of marine forecasting and product delivery. For example, they developed a first-of-its kind high resolution nearshore wave model that addresses a range of marine forecast issues. These include general wave forecasting where the new technology has cut in half the time needed to produce a forecast that is also superior. This technology has spread through the National Weather Service and is now being pipelined into the standard forecast environment for all offices. This new technology has also supported solutions to regionally specific high impact issues such as harbor entrance forecast development that addresses one of the deadliest hazards in the marine environment. This level of research and development is uncommon from an operational field office with 24/7 forecast responsibilities, and it shows the level of dedication and commitment that Nancy has inspired in her staff.

“Nancy's office has also made significant advances in the approach to community preparedness for tsunamis. On the heels of the 2004 Indian Ocean tsunami, Nancy's team embarked on an aggressive approach to preparedness that used drills, tests, and exercises as the primary tool for ensuring that communities would respond correctly during a real tsunami. This was a significant departure from traditional preparedness activities that were based on presentations and written educational material. This approach was tested during the recent 2011 tsunami from Japan and the results were startling. Emergency officials reported that the real evacuations felt like drills because everything went so smoothly and because the public was completely calm.

“Nancy has also always believed that NOAA’s line offices should work together to accomplish the overarching goals of NOAA. She tirelessly contributed to the NOAA West team while also looking for ways to support fellow NOAA offices in northwestern California. She has been the driving force in uniting the NOAA of the region and this has resulted in very successful collaborative efforts to support NOAA's National Marine Fisheries Service in their management of migratory salmon.

“Nancy's leadership has had positive impacts far beyond the area covered by the Eureka Weather Forecast office because she has been very effective at developing her staff into future leaders. Nancy creates an office culture where everyone feels empowered to take risks and to innovate solutions to significant problems. Her effectiveness is shown by the high number of leadership positions held by former members of Nancy's office. As an illustration, both the east coast and west coast regional marine program leaders, as well as the national marine program leader all started on the marine team at the Eureka Weather Forecast Office under Nancy's leadership. …”