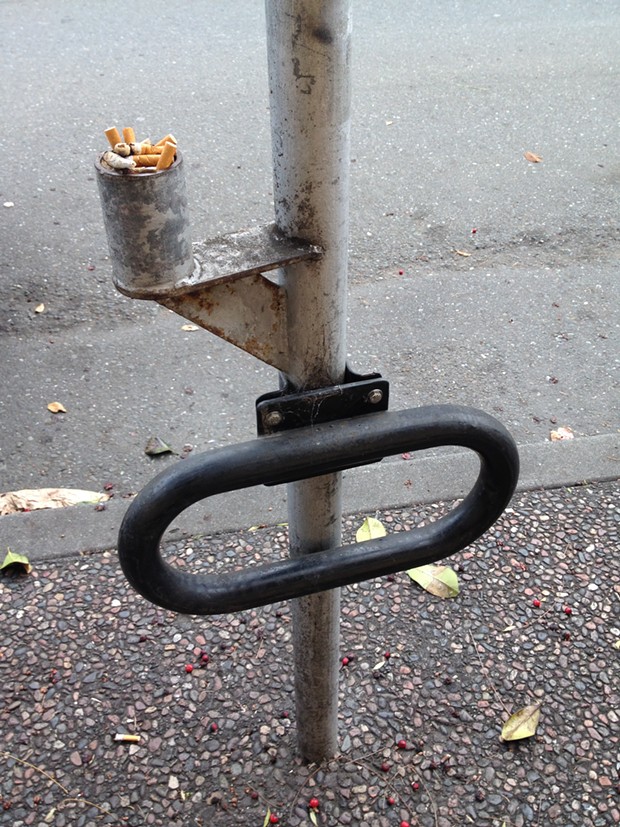 We’re a (mostly) sad, bad, hackalung lot up here in Northern California. According to the American Lung Association, “Progress in the fight against tobacco use is at a standstill in California and in most cities and counties in the North Coast …”

The association released its annual State of Tobacco Control report today, which shows that statewide, aside from a few locations, there’s been no movement toward advancing tobacco control policies.

“California’s weakened position on tobacco prevention is due to the fact that the state has not increased its tobacco tax since 1999 and now ranks 33rd in the country at 87 cents per pack, far behind states like New York, Illinois, Texas, Florida, Oregon and Washington,” says the association’s news release.

In Humboldt County, the overall tobacco grades for seven cities and the unincorporated county have not budged since last year’s report: Arcata, Blue Lake and Eureka get Cs, once again, while Ferndale, Fortuna, Rio Dell, Trinidad and the unincorporated county retain their shining Fs. Specifically, there’s good news and bad news. For their efforts to encourage smoke-free outdoor air, Arcata, Blue Lake and Eureka each get an A, just as in previous years (the gauntlet of storefront-clinging smokers down in Old Town notwithstanding); those other cities and the county get Fs (again). As for efforts to provide smoke-free housing, Arcata and Blue Lake keep their Ds, and Eureka gets downgraded from a B last year to a C this year; those other cities and the county get another round of Fs. And every locale flunks the part where they’re supposed to be trying to reduce the sales of tobacco products.

So what’s with all those Fs?

American Lung Association spokesperson Pam Granger says the study only grades places based on laws on their books, and the elected officials in those flunking cities and the county have not passed any policies that would protect people from exposure to secondhand smoke or to reduce sales of tobacco products.

‘It’s hard to believe,” Granger says, given the constant flood of information out there about the health impacts of smoke and secondhand smoke.

Some cities and counties in California have enacted strong policies on tobacco control, she says — and whether they have done so or not has nothing to do with being rich or poor, rural or urban, small or big. Locally, Blue Lake was an early adopter of strong outdoor air protection laws. And Arcata has a smoking ban around its plaza that city officials are talking about expanding to cover more ground. Eureka’s got laws, too, although it was downgraded in the smoke-free housing category. Granger says that’s not because of any backsliding on Eureka’s part, but more because the grading system was revised to reflect all the measures other cities and counties have been taking across the state, and that raised the bar … a notch above Eureka’s standstill head.

Maybe this will be the year of Humboldt, Granger says, adding, "Because I strongly believe elected officials in Humboldt County care just as much about their citizens as others do, I’m going to hope that the report card will remind them that clean and healthy air should be at the top of their list of concerns in 2015.”

And here's the news release:

Locally, San Rafael and Marin County received the highest grades in the state with an overall tobaccocontrol grade of an A, and six municipalities (Healdsburg, Petaluma, Mill Valley, Sebastopol, San Anselmo and Sonoma County) received an overall grade of B. In addition, Healdsburg, American Canyon, Corte Madera and San Anselmo all passed strong policies in 2014 to further protect their residents from tobacco-related death and disease.

“Despite improvements, more still needs to be done in the North Coast to better protect residents from the harmful effects of smoking,” says pulmonologist Eugene Belogorsky, MD, volunteer physician for the American Lung Association in California. “We have a lot of work to do to safeguard public health fromtobacco-related illnesses. Tobacco use continues to be the leading cause of preventable death and illness in the U.S., and we must take the necessary steps to ensure a tobacco-free environment for our community.”

Once a proactive leader in tobacco control efforts, California now falls behind in protecting residents fromtobacco. This year’s report shows that while California earned a B for its smokefree air policies, the state received an F for its low tobacco taxes, an F for failing to sufficiently fund tobacco prevention and control programs, and a D for poor coverage of smoking cessation and treatment services.

In 2014, the Lung Association and its partners called for immediate action on tobacco use by all levels of government to achieve three bold goals: reduce smoking rates currently at about 18 percent to less than 10 percent by 2024; protect all Americans from secondhand smoke by 2019 and; ultimately eliminate the death and disease caused by tobacco use.

“The American Lung Association is urging the federal, states, and local governments to take needed steps to achieve these bold goals,” says Olivia J. Gertz, President and CEO, American Lung Association in California. “It’s no secret that to reduce tobacco use in the United States, our leaders need to muster the political will to implement proven policies. We cannot afford the health or financial consequences of their continued failure to act.”

California’s weakened position on tobacco prevention is due to the fact that the state has not increased itstobacco tax since 1999 and now ranks 33rd in the country at 87 cents per pack, far behind states like New York, Illinois, Texas, Florida, Oregon and Washington.

“Increasing the tobacco tax has been proven to reduce tobacco use,” says Gertz. “This is why the American Lung Association in California is standing with Save Lives California, a broad coalition dedicated to passing a lifesaving $2 per pack tobacco tax – either through the legislature or by ballot measure – by the end of 2016. By passing this measure, we will not only save the lives of about 100,000 people, we also will save taxpayers billions in health care costs.”

Tobacco-related deaths are the single, most preventable cause of death in California. More than 21,300 kids start smoking each year in the state, and tobacco costs California $18 billion – a tremendous burden that the state cannot afford.

Save Lives California will generate revenue to expand treatment services for Medi-Cal patients withtobacco-related and other illnesses, support existing statewide programs to prevent youth from usingtobacco, stop illegal sales of tobacco, increase funding for medical research into new treatments and cures for deadly diseases such as cancer and lung disease, and restore California’s leadership in tobacco control efforts.

In 2014, the federal government took small steps to protect citizens from the harmful effects of tobacco, but still fell short in important areas such as tobacco taxes and finalizing its regulatory authority over alltobacco products. In April, the Food and Drug Administration (FDA) proposed to assert authority over alltobacco products including e-cigarettes, little cigars and other tobacco products. The American Lung Association also expressed strong opposition to the Obama Administration’s proposal to exempt certain cigars from basic FDA oversight and that it failed to finalize the proposal by the end of 2014.

“We must increase our efforts in stopping tobacco from robbing another generation of their health,” says Gertz. “I urge everyone to join the American Lung Association in California and Save Lives California, and help us tell our leaders to take action now to save lives.”