Jury selection began this morning in the federal trial of Mikal Wilde, who stands accused of killing a worker at the scene of his Kneeland marijuana farm in 2010.

Wilde faces a total of six charges, including cultivation of more than 1,000 marijuana plants with intent to distribute and murder in the commission of a narcotics offense. He faces life in prison if convicted on all counts in the case.

Prosecutors allege Wilde, 32, gunned down two of his workers at his growing operation, killing Mario Roberto Juarez-Madrid and critically wounding Fernando Lopez. The shootings allegedly occurred after the two men demanded to be paid for the work they’d done and returned to their homes outside of Sacramento. Wilde — who was facing severe financial troubles and had recently filed for bankruptcy — allegedly told the men he’d take them home but returned to the property armed with a handgun and opened fire.

The case, which was taken over by the feds in 2012, has taken a number of interesting turns while meandering toward trial since Wilde signed on J. Tony Serra, an eccentric, powerhouse San Francisco attorney, to defend him in June of last year. Serra explored and later abandoned an insanity defense, and then filed a motion seeking to have the charges against Wilde dismissed because federal marijuana laws are irrational and arbitrary. The motion — which read like an 80-page, full-scale attack on the federal Controlled Substances Act — was ultimately denied by federal Judge Edward Chen, who seemed sympathetic with some of Serra’s arguments but ultimately concluded that “given the continuing debate over marijuana, this court must defer to the legislature’s judgments on disputed factual issues.”

The trial promises to be a fascinating one from a legal perspective, if solely because of Serra’s involvement in it. The long-haired, 80-year-old Serra is a captivating figure. He’s taken a vow of poverty and is known for wearing thrift store suits, sometimes hemmed with tape and staples, to court. He’s also been imprisoned twice for tax evasion — in 2005 and in the 1970s — after refusing to pay income taxes in protest of war efforts in Iraq and Vietnam. But Serra’s also renowned as one of the best criminal defense attorneys in the state, if not the nation, and boasts what colleagues call a “remarkable acquittal rate.” 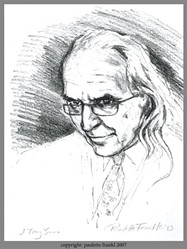 He famously won the acquittal of Black Panther founder Huey Newton in a high-profile murder case, and is currently representing Raymond “Shrimp Boy” Chow on charges of money laundering and conspiracy in a case that spawned out of the corruption investigation into the activities of State Sen. Leland Yee. Locals are most likely to remember Serra for his successful represented a host of Redwood Summer protesters, his involvement in the lawsuit against Humboldt County and Eureka law enforcement officers for swabbing pepper spray into the eyes of nine timber protesters and for his winning the acquittal of Eugene “Bear” Lincoln, an American Indian charged with the murder of a sheriff’s deputy on the Round Valley Indian Reservation in Mendocino County in 1995.

Serra is known for taking cases symbolic of larger causes. It seems he’s taken on Wilde’s case as a platform to fight what he sees as the evils of marijuana prohibition. But, in doing so, he certainly hasn’t cherry-picked an easy case with a sympathetic defendant. After all, at trial, Wilde is expected to be confronted by Lopez, who at Wilde’s preliminary hearing took the witness stand and testified about how Wilde refused to pay him and, instead, disarmed him before shooting him in the face. But, at the time of their trials, many probably didn’t see Lincoln and Newton as sympathetic either. And, few would have bet on their acquittals.

Opening arguments are expected in Wilde’s case as soon as a jury is empaneled.

Serra was interviewed in the December edition of Skunk magazine. Here are a few highlights:

“I don’t believe in private ownership of property, so I have nothing. I took a vow of poverty in the ‘60s, probably through an LSD experience.”

“I’ve represented a broad spectrum of defendants, from street people to reform leaders in activist causes, not just people accused of murder. I do not represent snitches, police, bankers, stockbrokers, and other capitalist types.”

“Marijuana for me has been the boon of my life. All my role models have been alcoholics or opiate aficionados. I’m a pothead. Marijuana as a medicine has preserved my health, vigor and commitment to help others. It has given me enhanced imagination and insight. It has truly elevated my consciousness. … History will vindicate the penal martyrs of marijuana prohibition. Marijuana will be legalized.”

“Let’s Pretend: They ask, ‘Dad, what was the most important thing in your life?’ They’re expecting — ‘my children’ or ‘my major cases’ or ‘my writing and my poetry.’ No! Anyone who dropped acid in the ‘60s, say more than 50 times, will say LSD. It’s the most significant, overpowering, awesome catalyst to create insight that has existed in my generation. So, LSD for me was just fabulous! I would take it on a monthly basis under the full moon. I’d run naked in the ocean.”