The city contends that the property’s owners, Floyd and Betty Squires, have failed to secure a lodging permit for the 15-room on Broadway for this year, after operating without one for all of 2014. Chief Building Official Brian Gerving said the city has repeatedly notified the Squireses that they were operating the lodge in violation of the city’s motel ordinance, which requires all motels and hotels within city limits to get a permit. The Squireses, Gerving said, have repeatedly contended that the Blue Heron is not, in fact a motel or hotel. 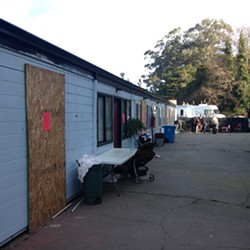 But Gerving says it is, by the city’s definition, which doesn’t distinguish between “transient and non-transient hotels,” or those that accommodate visitors who stay for a couple of nights versus those whose guests generally stay for months at a time. Instead, Gerving said, the ordinance defines hotels and motels as places that don’t have self-sufficient dwelling units, which in most cases means they lack a kitchen and minimum square-footage requirements. Under that definition, the Blue Heron is a motel, according to Gerving.

The Squireses, however, appear as though they aren’t going down without a fight. The couple filed a claim seeking damages in excess of $25,000 against the city Tuesday alleging that the city’s notice to vacate was issued without due process and in violation of their civil rights. And the Squireses touch on the hotel/motel question, arguing that the Blue Heron offers fewer amenities than a hotel and thus doesn’t fit that definition. “I have owned the property for over 10 years and never used it for a motel,” states the claim, which is signed by both Floyd and Betty. “It is used for long term residential use. There are no phones in the rooms and housekeeping and linens are not provided as tenants do laundry off site.”

As a part of their claim against the city, the Squireses included a copy of the business license they procured for the lodge on Jan. 1. The license describes the business type as “hotel/motel.”

Gerving said city staff met with Floyd Squires last week and he made his position clear that the motel ordinance does not apply to the property. 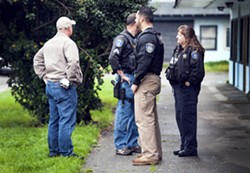 Nonetheless, the city followed through with shuttering the property this morning. Gerving said staff from the county Department of Health and Human Services and Street Outreach Services were also on hand to help move the tenants who remained at the property into transitional housing and sign them up for additional services.

There was also a heavy police presence at the property this morning, which Eureka Police Capt. Steve Watson said was due, in part, to a threat called in to the FBI this morning. Watson said the man who called in the threat warned of a protest at the Blue Heron and said he was “going to go down in flames and be a martyr.” When EPD investigated the man, Watson said it was found that he had a prior conviction for making a destructive device and it was decided his threat should be taken seriously.

But all went smoothly on site this morning, Watson said. The captain said he breathed a sigh of relief watching the place be boarded up, noting the residence has generated more calls for police and emergency services over the last two years than any other in town. Watson also has a personal history there. When he lead the department’s fledgling Problem Oriented Policing team in 2010, the first warrants it served were on rooms there where heroin and methamphetamine were being sold.

“I’ve spent many, many hours in that building,” he said. “I’ve had a cockroach shower there — literally — inside the Blue Heron where I was searching and disturbed something and had roaches rain down on me. … (The conditions) are intolerable and subhuman. No one should have to live like that, regardless of their background. When you live in that kind of negative, ugly environment it tends to breed a sense of hopelessness, which breeds more crime and disorder.”

Watson said he was thankful county staff was on hand to help the tenants transition into something better, and also expressed appreciation for the Eureka Rescue Mission and local homeless advocate Betty Chinn, who he said also helped set up placements for some displaced tenants. He said helping the tenants wasn’t something the city was obligated to do by law, but it was the right thing to do. Gerving said he was also grateful for all the assistance the city received and that it was able to find “at least temporary housing” for all Blue Heron residents who needed it.

Moving forward, Gerving said inspectors found code violations at the property during a walk-through today. It will take some time to determine the full extent of those. “We’re still evaluating what the next steps will be, and that will probably be determined over the next couple of weeks,” he said.

The Squireses have faced a long history of accusations surrounding the quality of their housing. Most notably, the city sued them back in 2011, seeking to have 26 of their properties placed into the hands of a receiver, who would bring them up to code compliance and bill the Squireses for the expense. The properties in question have been inspected and a ruling from a local judge in the case is expected any week.

Amid that legal skirmish, the Squireses countersued the city (unsuccessfully) and, in their claim, they contend that’s motivating the current action. “Brian Gerving is abusing his power as building inspector in retaliation to the lawsuit filed against him and the city of Eureka,” the Squireses wrote. “He is violating our civil rights meant to protect our freedom.”

Meanwhile, Watson said he hopes this morning’s action has a reverberating effect.

“The city had no other resource but to take this action,” he said. “We can’t fix the problem unless we hold the owner accountable, and we can’t fix the problem until we shut down that source of income for him and essentially force compliance upon him. … I think the owners and managers of these types of establishments are on notice that the city isn't playing around and is serious about trying to improve conditions for the people that live in these establishments and for the city as a whole.” 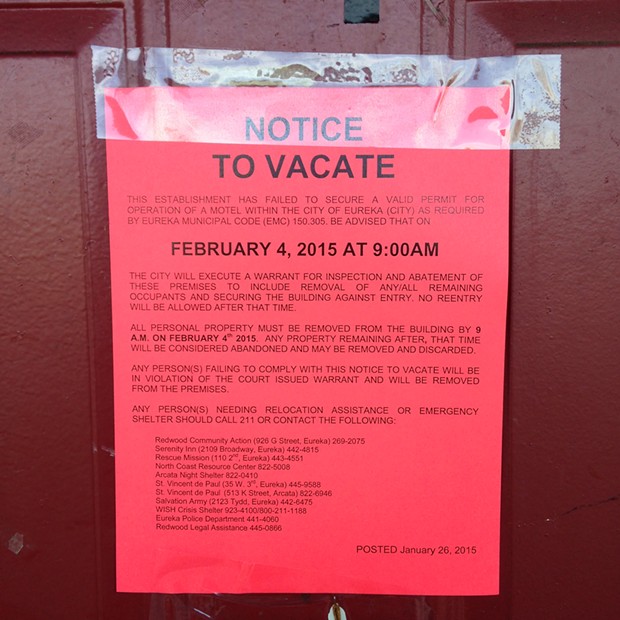