On the Klamath dams front 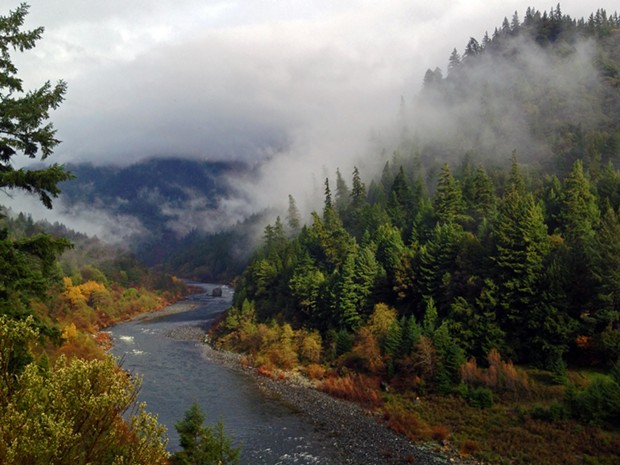 Former Oregon state senator Jason Atkinson has co-produced a new documentary about the conflict between users of the Klamath River and how they finally hashed out the historic Klamath Basin Comprehensive Agreement to take out four dams and restore salmon and other habitat. The agreement awaits Congress' approval. The film, by Atkinson and filmmaker Jeff Martin, is called A River Between Us and comes out this spring.

High Country New interviewed Atkinson about it, and notes that he was the "first Republican to ever receive a 100 percent approval rating from the Oregon League of Conservation Voters."

"Atkinson, a fifth generation farmer along the Klamath, has a long personal history with the river. He has fly-fished there since he was old enough to hold a rod and learned from his grandparents — one an Eisenhower Republican, the other, a Reagan-hating liberal — that restoring the Klamath did not have to be a polarizing issue.

HCN reports that Atkinson "hopes the film will help spur Congress to authorize the agreement — what he calls 'the greatest conservation opportunity in America.'” Atkinson, in the interview, says that it's wrong to think of the Klamath River battle as "right versus left, dams versus fish":


"HCN: But today’s political climate makes that kind of model look almost unattainable. Why is it that so many environmental initiatives have become lightning rods for partisanship?

"JA: In my mind it was 1973 when the Endangered Species Act was passed—by a Republican no less. People had no idea what the unintended consequences of that would be. Ten years later, that Act was seen as a declaration of war on small communities across the country, and I would argue that that’s when partisanship really stepped in for the first time in the conservation debate.

"The thing that frustrated me was that having grown up in agriculture, I know that every year, once harvest is done, all the farmers go fishing. Everybody does. So in my own mind, I couldn’t reconcile a narrative that makes those kinds of distinctions — and one that discounts an entire swath of Americans from the public land debate."


In related news, President Obama's 2016 budget includes $18 million for management of the Klamath Project (the U.S. Bureau of Reclamation system of dams and reservoirs in the upper Klamath River basin). The Herald and News details what the money would fund, including "$5.2 million for water and energy management and development:

■ $200,000 for Klamath Project operations planning that will provide direction for Endangered Species Act, Indian trust and irrigation contracts.
■ $100,000 for water conservation activities.
■ $806,000 for water rights administration and the BOR’s continued representation in the adjudication process.
■ $1.4 million for water quality monitoring. Data will analyze effect of Project operations on endangered fish, wildlife refuges and other resources.
■ $693,000 for power development and continued investigations into providing affordable power for on- and off-Project agricultural users.
■ $2 million for water resources initiative and studying innovative, market-based means of reducing water conflicts."