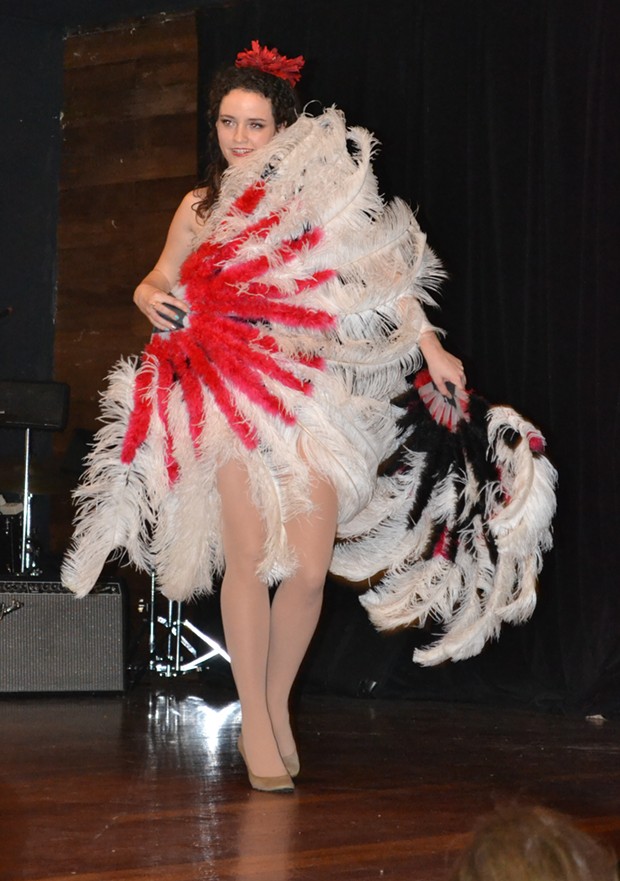 It was a perfectly pleasant party (we were told we were in New Orleans). Sure, the ballerina Ykatarina Chislova and burlesque dancer Lydia Thompson seemed out of sorts with each other — Ykat (pining for her dead duke, and not the paranoid live Grand Duke Alexei) calling Lyd (was she in fact a British spy?!) a low-class fan dancer, basically, and Lydia saying what a snob. But the gentlemen seemed amiable enough. Except that banjo-guitar-cello-playing Papa Ory, whose smile contained some smirk at the edges. Plus what was he doing carrying around that clarinet when it was not among the instruments with which he claimed proficiency? All so danged confusing until the ballerina collapses mid-croisée and we slowly, collectively remember some connection to Japan and blowpipes.

And that was a wrap for the Clarke Museum's 4th annual Mardi Gras Murder Mystery dinner last Saturday night, a fundraiser for the museum.

The museum, by the way, is looking pretty fresh these days, after some renovation in the main hall and the installation of new exhibits. Check it out yourself at a Feb. 28 open house, 11 a.m. to 6 p.m.

And if you really are that gluttonous for history, KEET TV is premiering a three-part series this month, "Stories from the Clarke," by Clarke Museum board member and veteran local producer Bill Morrill. Part 1, which aired Feb. 3, was about Cecile Clarke, who started the museum. The second, airing Feb. 10, looks at brawling Old Town in its days of "bars, brothels and working men," and the third — "My favorite," says Morrill — focuses on Eureka's and Humboldt Bay's shipbuilding and commercial fishing history, its immigrant families and the early dance band scenes in particular at the Old Town Bar and Grill (the recently renovated Healy Brothers Building).