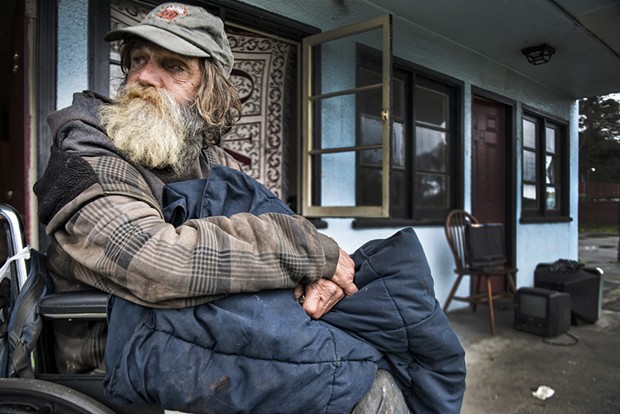 Seven former tenants of Floyd and Betty Squire’s Blue Heron Lodge have filed nearly identical claims for damages against the city of Eureka, arguing the city unlawfully evicted them, violated their civil rights and intentionally inflicted emotional distress upon them when the city moved to condemn the lodge earlier this month. Each of the claims seeks unspecified damages in excess of $25,000.

The claims were all filed on Feb. 3, a day before the city boarded up the dilapidated structure on Broadway, arguing the Squireses had refused to secure a lodging permit and were in willful violation of the city’s motel ordinance. City and county staff were on hand Feb. 4, and in days leading up to the city action, helping residents connect with services and find other housing.

The Journal reported last week that the Squireses filed a claim for damages against the city, arguing its notice to vacate was issued without due process and in violation of the couple’s civil rights. The couple argues that the property shouldn’t fall under the city’s motel ordinance, as it is used for long term residential use. (The city’s ordinance doesn’t identify motels and hotels by lengths of stay and instead lists all residential structures without self-sufficient dwelling units as motels and hotels.)

Several of the claims include letters from the tenants as attachments, which are also nearly identical and include the line: “The resident manager assisted me with this filing.” The letters also include the line: “This room is my home and my long term residence. I pay rent by the month and will continue to do so.”

The Journal called various city officials last week to ask if any tenants in the Blue Heron’s 15 rooms had paid rent for the month of February prior to the city’s shuttering the property. No one knew, but Chief Building Inspector Brian Gerving and police Capt. Steve Watson, both of whom were on the property as residents were being moved out, said none specifically complained to them that they’d already paid the month’s rent to the Squireses.

Attempts to contact the people who filed the claims were unsuccessful, as none of phone numbers listed in the claims — including some cell phones — were operable when tried this morning. One of the claims listed a phone number that was only nine numbers long, including the 707 area code.

There are a few other peculiarities about the claims, as well. For example, two of the claimants’ names are spelled differently at various points in the paperwork. Another includes a signature for a 10-day-old baby.

Eureka City Clerk Pam Powell said the Squires’ claim arrived at City Hall separately, but that the seven tenant claims were all dropped off together by an unidentified woman. A message left for Floyd and Betty Squires was not immediately returned today.

Staff is recommending that the city council reject the claims at its meeting Tuesday, which is a routine first step with any claims filed against the city.