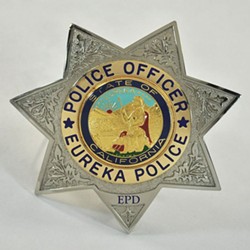 The mother of a 42-year-old man who died in the Humboldt County jail hours after being arrested by Eureka police officers last year has filed a federal wrongful death lawsuit seeking unspecified damages.

Brought on behalf of Stephany Borges, Daren Borges’s mother, the suit filed Thursday alleges officers violated Borges’ rights when they forcefully arrested him at about 2 p.m. on June 13, 2014 on suspicion of misdemeanor public intoxication. Then, the claim alleges officers were negligent when they booked him into the Humboldt County jail instead of taking him to be examined at a local hospital, despite Borges’ “obviously experiencing a medical and psychiatric emergency.” At about 4 p.m., Borges was found unresponsive in a sobering cell at the jail and was pronounced dead about 20 minutes later at a local hospital. The Humboldt County jail says staff checked on Borges every 15 minutes after placing him in the cell, which is jail policy.

The lawsuit — which specifically names the city of Eureka, the county of Humboldt, Sheriff Mike Downey and arresting officers Michael Stelzig, Drake Goodale and Bryan Franco — asks that wrongful death and punitive damages be decided by a jury after trial. The case is being brought by Woodland Hills attorney Dale K. Galipo. If Galipo’s name doesn’t sound familiar, it should.

He’s the attorney who recently announced the filing of a claim — likely to be followed by a federal lawsuit in April — on behalf of the family of Thomas “Tommy” McClain, the 22-year-old shot dead in September by a Eureka police officer, who said he opened fire after McClain reached for a BB gun that the officer thought was real. The district attorney’s office declined to file charges against any of the officers involved in that shooting, and a shooting review board convened by EPD Chief Andy Mills found the officers followed departmental policy in the incident.

Galipo also represented the family of Martin Cotton III, who the Borges lawsuit states died in a jail sobering cell “under shockingly similar circumstances.” In Cotton’s case, Galipo negotiated a settlement with the county of Humboldt and saw a jury award Cotton’s family $4.6 million in damages from Eureka and its officers.

The Borges case comes on the heels of Mills announcing both that that he is looking to have a federal agency step in and review all of Eureka’s officer-involved fatalities stretching back 10 or 15 years and that he is revamping the department’s internal affairs investigations into civilian complaints against the department.

Mills said he has reached out to the director of community policing for the U.S. Department of Justice — and even met with him personally in Orlando — asking the department to fund a review of all EPD’s officer involved fatalities looking for trends, patterns and areas in which the department can improve, but has yet to hear back. If the DOJ is unwilling to take on such a review, Mills said he will look to raise money through the private sector to fund it. But a thorough review is expensive, running as much as $50,000, Mills said, so he will wait to see if DOJ will agree to step in before looking at alternatives.

The Center on Juvenile and Criminal Justice, a nonprofit nonpartisan organization dedicated to reducing the national incarceration rate, recently conducted an analysis of all California killings that were classified as “deaths by legal intervention” — 810 in total — between 2000 and 2010. On a per-capita basis, the review found Eureka to be the state’s deadliest city for killings by law enforcement, with higher rates of officer-involved fatalities than San Bernardino, Compton and Inglewood. Eureka (population 21,000), its noted, had the same rate of officer-involved killings as Sacramento (population 472,000) for the study period.

It’s worth noting that Eureka’s numbers are elevated by the string of four officer-involved shooting deaths that occurred in less than one-year span between 2005 and 2006. Some have described the string as a statistical anomaly, while others pointed to it as evidence the department was out of control and poorly managed.

Mills — who took over as Eureka’s police chief a little more than a year ago — said an outside review of all EPD’s officer-involved deaths stretching back 10 or 15 years would send a strong message to the community. “I think would give a ton of confidence to the community that we are being as objective as possible,” he said.

At a recent city council meeting, Mills also announced that he’s conducted a review of all the department’s internal fairs investigations since 2008. The results raise some questions.

Mills said he’s not sure why Eureka’s outcomes varied so drastically from the national average, noting that he wasn’t here for most of those investigations. But, he said that it can sometimes be easy for cops to just take their peers at their word, rather than thoroughly investigating an incident.

“My response is that I want us to make sure that we are thoroughly and thoughtfully investigating every incident, that we’re not just taking the officer’s word over another person’s word,” he said. “If someone comes in and makes a complaint, we’re going to be as objective and thorough as possible.”

Last year, Mills said the department received 12 complaints, two of which were withdrawn. Of the other 10, four were sustained, 1 was not sustained, one was unfounded and three were exonerated.

Moving forward, Mills said he’s revamped EPD’s internal affairs investigation process to make sure complaints are investigated by the officer in the department with the best skillset to look into them, and enough distance from the subject of the complaint to be objective. Also, Mills is looking to put together a chief’s advisory panel, which would review internal affairs investigations to make sure they were fair and thorough. The panel — which would meet monthly and also review the department’s budget, policies and training — will be composed of seven people nominated by the council and the community and ultimately selected by Mills, Mayor Frank Jager and City manager Greg Sparks.

Mills said he’s hopeful to have the panel in place and meeting by June.