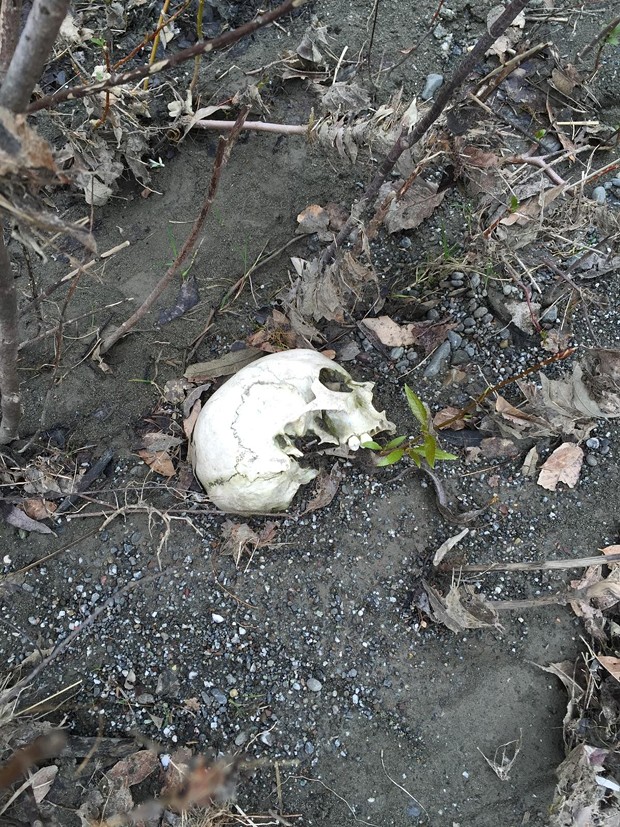 UPDATED: The Humboldt County Coroner's Office sent out a press release Tuesday afternoon regarding the skull and noting that no other human remains were found during a search of the area. You can find it below our original post.

PREVIOUSLY:
Blue Slide Road resident Chris Ghidinelli was cutting a new ATV path through the brush, on his way back from his favorite Eel River fishing hole when something caught his eye. Round and white, with two molars jutting from the upper jaw — as an experienced outdoorsman, Ghidinelli immediately knew these were not the remains of a deer or bear. It was a human skull.

"I don't think it could have been there that long," said Ghidinelli, who visits the site often, "I think it must have washed down from upstream. It was half-buried in the sand and caught by a willow branch."

Ghidinelli called his find into the county coroner's office. Deputy Coroner Trevor Enright confirmed the remains are human but, pending examination by the department's anthropologist, could not identify the sex, age or ethnic background of the deceased. A press release is forthcoming.

The skull was found just upstream from Howe Creek. The area will be examined by a forensics team at a later date. Enright confirmed that it was the first such find of 2015.


On March 9, 2015 at about 12:00 PM the Coroner’s Office received a report of a found human skull on the river bar near Ferndale. A Deputy Coroner responded to the location and met with the citizen who found the remains. The Deputy Coroner confirmed that it was a human skull and searched the area for additional remains/bones. No other human remains were located during the search.

The skull appeared to have been exposed to the elements for an extended period of time. How the skull ended up where it was located and who it belongs to is unknown.

Anyone with information regarding this case is requested to contact the Coroner’s Office at (707) 445-7242.