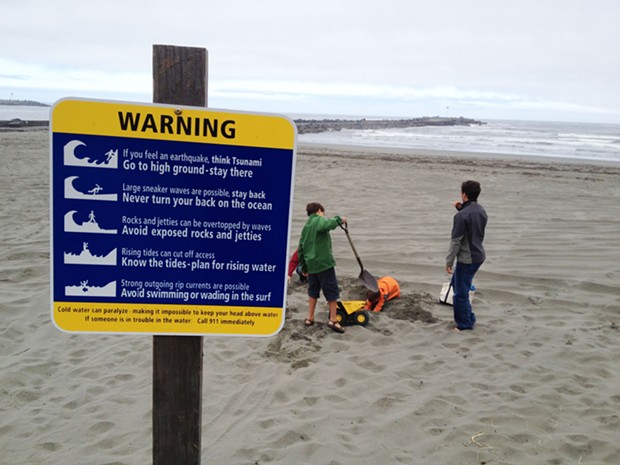 Bobby Allan Root, a 20-year-old from Vicksburg, Michigan who enjoyed sketching and a good Will Ferrell movie is presumed drowned after going missing in the ocean off the North Coast on March 24.

Root had been in Humboldt County visiting some friends when, on an overcast day, he dove into the Pacific Ocean at the mouth of Redwood Creek, west of Orick, trying to save his dog, who appeared to have been swept out to sea. Root’s friends quickly lost sight of him and — after U.S. Coast Guard and Humboldt County Sheriff’s office personnel spent more than 17 hours searching the water and nearby beaches by air, land and sea — officials now presume him drowned and have shift their focus from rescue to body recovery. The dog eventually made its way back to shore and has been placed in the care of Root’s friends in the area.

Troy Nicolini, a spokesman for the National Weather Service, says the story is tragic, and one he’s seen play out way too many times over his 17 years of tracking Humboldt County’s water deaths.


“One thing we’ve learned with great clarity is that the dogs almost always survive,” Nicolini says, adding that only once in his years of monitoring has he seen a dog drown in one of these events — that, he says, was a small, 4-pound lap dog. “Our message is, Let your dog get out on their own. They will make it, but rescuers of the dogs almost always drown.”

Root’s likely death would be the fourth to occur in North Coast waters this year, and the fifth in the last four months. Nicolini says Humboldt County averages about five or six drownings annually, with three or four occurring in the ocean and two in local rivers. He says he's never seen more than seven ocean drownings in a year but, since December, Humboldt has seen three of them and another pair of drownings in local rivers.

Humboldt County Chief Deputy Coroner Ernie Stewart says it’s impossible to attribute a reason to the recent spike in drownings. “It’s like anything else in this county — it spurts,” he says, noting that in a county with a small population, all statistics will jump and fall.

Nicolini agrees, saying most ocean drownings locally fall into one of three categories: larger than expected waves catching people off guard standing at what they thought was a safe distance from the ocean; people unaccustomed to local waters going in when they shouldn’t (either for a swim or a rescue attempt); and people who get swept or fall off rocks or jetties.

There are two things that make the ocean off the North Coast especially dangerous, Nicolini says. First, there are the rip currents — strong, narrow currents near the ocean’s surface that flow out to sea. Those are present along much of the Pacific Coast. “But here, we have this tremendous compounding factor which is the water temperature,” Nicolini says, adding that while it takes about 45 minutes to get hypothermia in the 54-degree water, cold water shock can set in almost immediately, causing lung and heart problems or decreasing blood flow to a person’s legs and arms, sapping his or her strength.

Nicolini says trends show few drownings in the ocean off the North Coast in the middle stretches of summer and winter. In the summer, he says, wave patterns slow and the ocean is generally calmer, while in the dead of winter the ocean is unruly and provides a “natural warning.” The biggest danger, he says, appears to come when the seasons transition, the sun comes out and the weather warms — all while wave patterns continue to hit the North Coast from the Gulf of Alaska. Those patterns, Nicolini says, are big and spaced out, meaning beaches in Humboldt County can appear calm and beautiful between sets of big, treacherous waves.

Nicolini says a key component to preventing these types of deaths is simply education, which is why most local beaches are now outfitted with signs warning of the dangers of the ocean. And, later this spring, Nicolini says education efforts will begin to shift toward local rivers, warning people that they often flow faster and colder than expected. But because many drowning victims are often from out of the area, Nicolini said the North Coast really needs to embrace a culture of awareness and safety that’s passed on to visitors. He also is quick to suggest that life jackets — which now come in snazzy colors and patterns— make great gifts.

But mostly — with that dangerous seasonal transition on the North Coast’s horizon — Nicolini urges folks to simply be aware and to never assume that standing anywhere near the ocean is safe.

“The most important message is just not to let the ocean fool you,” he says. “Every one of these deaths is just so heartbreaking. Someone goes to the river or the beach, and they just don’t come home — families are devastated and it just seems like a little bit of knowledge could save lives."