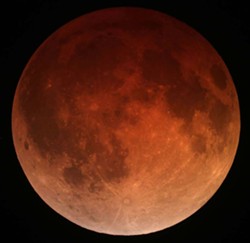 If you’re planning on prying yourself from your covers before dawn tomorrow to catch a glimpse of the lunar eclipse, you might be heading back to be disappointed.

The eclipse will begin at 4:57 a.m., when the earth, moon and sun align in the sky, with the earth blocking the sun’s rays and casting the moon in its shadow for nearly five minutes. The lunar surface should slowly darken, leaving it a glowing orange color. It’s expected to be a spectacular sight for those on the west coast, as the moon will be setting and largely visible in the sky.

However, as North Coasters have come to know, just because something cool is happening in the sky doesn’t mean we’ll be able to see it. Jeff Tonkin, a meteorologist with the National Weather Service’s Woodley Island station, said cloud cover expected to precede a storm system forecast to hit the area early Sunday morning may well block the moon from view.

“It’s going to be very iffy,” Tonkin said. “The chances (of seeing the eclipse) probably aren’t going to be great if you’re on the coast. If you’re inland, there’s probably a little bit of a better chance, but there’s still probably going to be some high cloud cover that might filter it out.”

The eclipse comes as part of what’s called a tetrad, or four total lunar eclipses that occur consecutively, roughly six months part. This will be the third of the tetrad, with lunar eclipses having occurred April 15 and Oct. 8 of last year, and the fourth forecast for late September.

On average, lunar eclipses occur about twice a year. What makes a tetrad special is that it's a string of total lunar eclipses. We'll let the folks at NASA explain:

"Usually, lunar eclipses come in no particular order. A partial can be followed by a total, followed by a penumbral, and so on. Anything goes. Occasionally, though, the sequence is more orderly. When four consecutive lunar eclipses are all total, the series is called a tetrad."


Unlike a solar eclipse, in which the moon passes in front of the sun, lunar eclipses are visible with the naked eye, as long as the night’s sky is clear. While there’s a good chance folks on the North Coast won’t get that clear sky, Tonkin said it’s always possible the clouds will part or show up later than expected.

“Set your alarm and go outside, and if it’s cloudy just go back to bed,” he said.

As to the storm front coming in, Tonkin said the forecast has it dumping some rain on the area Sunday morning through Sunday afternoon, with a break Sunday night before some more precipitation is expected Monday. Tonkin said it looks like we may get some pretty heavy rain Monday, but not enough to create any danger of flooding.

If any of you do catch a glimpse of the lunar event, snap a photo and send it our way, to editor@northcoastjournal.com. We'll post whatever we get for those who can't manage to tear themselves away from the covers.

Below, watch astrophysicist Neil DeGrasse Tyson (slated to speak at Humboldt State University April 14) describes the science behind a lunar eclipse. The video is from an event in December 2010, so it's a bit dated. But Tyson's explanation, and his amazing eclipse neck tie, make it well worth watching.