The Marten’s Fine, Says the Feds 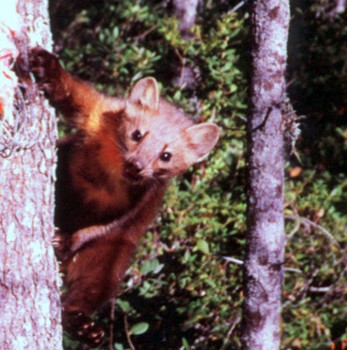 A years-long tussle to get U.S. Fish and Wildlife to recognize the plight of the Pacific marten (which includes the Humboldt marten) just ended, with the national service announcing that the furry creatures’s problems “do not rise to the level of a threat either individually or cumulatively.”

The marten’s “stressors,” which Fish and Wildlife says it evaluated thoroughly, include timber harvest, exposure to rodenticides, development, trapping, disease, predation and getting run over.

The Center for Biological Diversity petitioned Fish and Wildlife to list the marten as threatened in 2010 and sued the agency in 2012 for dragging its feet on the topic.

Tierra Curry, a senior scientist with the center who wrote the original marten petition five years ago, said she was shocked.

“It’s not a scientifically defensible decision,” she said, adding that there are fewer than 100 Humboldt martens left, and that recently nine of them have been killed by bobcats and another by rodenticide. “They’re obviously threatened.”

Curry said the center will file a lawsuit to challenge the decision.

From Fish and Wildlife:

Arcata, Calif. – The U.S. Fish and Wildlife Service today announced that the coastal distinct population segment (DPS) of the Pacific marten, Martes caurina, which includes coastal Oregon populations of marten and the current classification of Humboldt marten that occurs in coastal northern California, is not warranted for ESA protections at this time.

The Service evaluated stressors that may be impacting coastal marten populations, including wildfire, climate change, vegetation management such as timber harvest, development, trapping and research, disease, predation, collision with vehicles, exposure to toxicants such as rodenticides, and effects associated with small and isolated populations.

After a thorough evaluation of the best information and data available, the Service concluded that these stressors do not rise to the level of a threat either individually or cumulatively. As part of its evaluation, the Service also determined that existing regulations involving multiple Federal and State land use plans are being implemented effectively. In addition, policies and regula tions associated with the Northwest Forest Plan continue to abate the large-scale loss of forested habitat types that may be suitable for coastal martens.

This finding is available on the Internet at http://www.regulations.gov at Docket Number FWS–R8–ES–2011–0105. Supporting documentation we used in preparing this finding is available for public inspection, by appointment, during normal business hours at the U.S. Fish and Wildlife Service, Arcata Fish and Wildlife Office, 1655 Heindon Road, Arcata, CA 95521. Please submit any new information, materials, comments, or questions concerning this finding to the above street address.