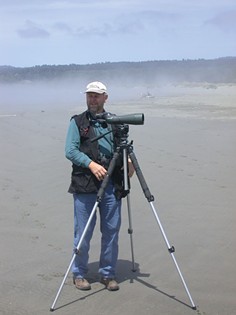 About nine and a half months after surrendering to federal prison, embattled local biologist Ron LeValley recently announced his return home with a grinning selfie taken somewhere on the North Coast and a plea for help paying down the debts incurred from his “sabbatical.”

Since LeValley’s incarceration for conspiring to embezzle almost $1 million from the Yurok Tribe, the prominent birder, nature photographer and wildlife biologist has kept up an email list dubbed “Outside my Window” that offers daily bird photographs (LeValley got some help on the outside with the daily emails). Folks on LeValley’s list got a surprise shortly after midnight this morning, when the (jailbird) selfie popped up in their inboxes with the following message :

“Well, I am finally home! Back at the ocean! ... I would like to make a request to you. I will keep putting out the (Outside my Window) for free, but I would greatly appreciate the purchase of an 8x10 matted print from as many of you as are interested. The legal experience did cost me quite a bit and I would like to pay off my bills. So if you have a favorite photo, please order one from me! Many thanks to you all for the support I received while I was on 'sabbatical.'"


Included in those bills LeValley mentions, presumably, is $852,000 in court-ordered victim restitution payments, with $752,000 owed to the Yurok Tribe and the balance to Great American Insurance Company. According to court records, LeValley has yet to make a payment on either debt, which may be why he's pushing the 8X10 prints, which he retails for $45 to $85 apiece, depending on matting and framing preferences.

The enterprising LeValley, 68, hasn’t yet technically been released from custody, as he will remain under the supervision of the Federal Bureau of Prisons’ Sacramento Residential Reentry Management field office. Given LeValley’s note and smiling selfie, it seems likely he’s one of the 3,445 inmates the office monitors on home confinement, though a prison spokeswoman wasn’t immediately able to confirm that. His official release date from his 10-month prison sentence remains set as April 29. (LeValley was also ordered to perform 100 hours of community service and to give talks about his crime to 200 people, but it remains unclear what plan is in place, if any, for fulfilling those obligations.)

According to court documents, LeValley used his company, Mad River Biologists, to conspire with former Yurok Tribe Forestry Director Roland Raymond to embezzle tribal funds through a complex scheme of fake and inflated invoices and payments for northern spotted owl survey work that Mad River Biologists never performed. Under LeValley’s direction, the company submitted more than 75 false invoices between 2007 and 2010, according to court documents, which indicate that LeValley then funneled the money back to Raymond after taking 20 percent off the top.

The survey work that was never done was primarily looking for habitats for the federally endangered northern spotted owl to determine what tribal properties could be logged without harming owl populations. It’s unclear whether Raymond and LeValley’s conspiracy affected timber harvest plans or led to the destruction of potential owl habitats.

LeValley pleaded guilty in February of 2014 to a single charge of conspiring to embezzle from a tribal organization. Raymond entered a similar plea, and is currently serving a three-year prison sentence.

Since his arrest in early 2012, LeValley hasn’t spoken with the press and attempts to reach him for this story were unsuccessful. But those eager to hear his story in his words need not fret, as he promises a “summary” in the near future.

“I will be posting a summary of my experience online in a couple of weeks for those of you who are interested,” he wrote in the Outside my Window note. Stay tuned as the bird prepares to sing.