Scenes from a Sweep: Images from behind the Bayshore Mall and a look at what's next 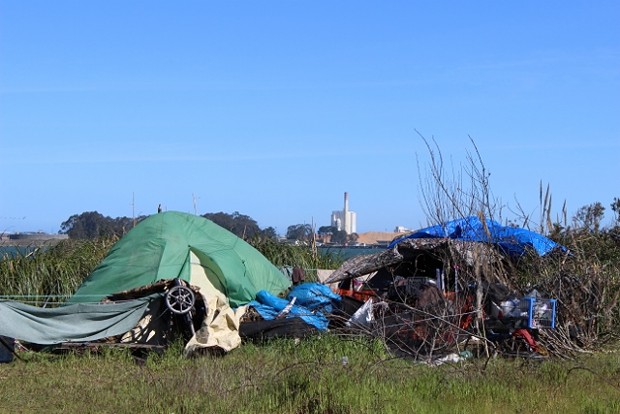 The Eureka Police Department led a multi-agency effort Wednesday to remove what Chief Andrew Mills called a “criminal element that has infiltrated” the network of homeless camps near the railroad tracks behind the Bayshore Mall.

Dubbed Operation Safe Trails, the full-day sweep of the encampments involved more than 50 officers from at least seven agencies, and resulted in more than two dozen arrests, mostly for outstanding warrants. Mills said the people simply camping in the area were left alone, but warned they will be forced to move from the area in several weeks, as soon as the city approves a designated camping area for them. 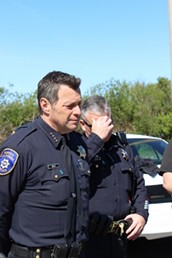 “I can’t kick people out until we have someplace for them to go,” Mills said, adding that his plan is for the city to have an “organized, controlled and safe” temporary camping area set up for homeless people within a month. As soon as that happens, Mills said officers will evict everyone from the greenbelts surrounding the mall and conduct regular follow-up patrols to make sure the area is vacated.

Wednesday, however, the area was sprinkled with more than three dozen campsites that were home to some 100 or so people. The camps were located in clusters, some of which appeared fairly clean and well kept, while others were strewn with shopping carts, litter, refuse and debris.


A woman who identified herself only as Donna stood in front of her camp shortly after 9 a.m. and said she’s been living down there for several weeks. As the wind gusted, tussling her hair, Donna explained that she’d been evicted from her place due to a problem with a friend that had come to stay with her. She said she could have couch surfed with some friends but didn’t want to impose and wear out her welcome. Instead, Donna took her tent and set up by the tracks.

She said she feels safe camping in the area, but said there are different homeless populations in the green belt behind the mall. Some try to be good neighbors and generally keep themselves, she said, noting that many camps collect their trash and put it out once a week for John Shelter and his work crews to come pick up. But others living in the area, Donna said, are unruly. “Some people are just bad and make things hard for everyone else because they only care about themselves.”

Donna’s neighbor, Trish, agreed. The women — both of whom declined to give their last names, saying they are ashamed of their situations — said they would happily relocate to a designated camping area, if one were available.

Mills said Wednesday’s sweep was the product of more than a month of planning, spurred by a spike in criminal behavior in the area. In recent months, he said EPD has responded to six violent assaults, a robbery and conducted searches that have resulted in the seizure of a dozen firearms. The chief also noted that homeless people are 50 percent more likely to fall victim to violent crime, emphasizing that Wednesday’s action was geared toward making the area safer for them as well.

Trish and Donna said they agree that violence and other unruly behavior seems to have escalated in the area in recent months, but Trish said the spike seems to have coincided with EPD’s sweep of the area at the foot of Del Norte Street some months back. She said that seemed to just move more people into the area behind the mall. 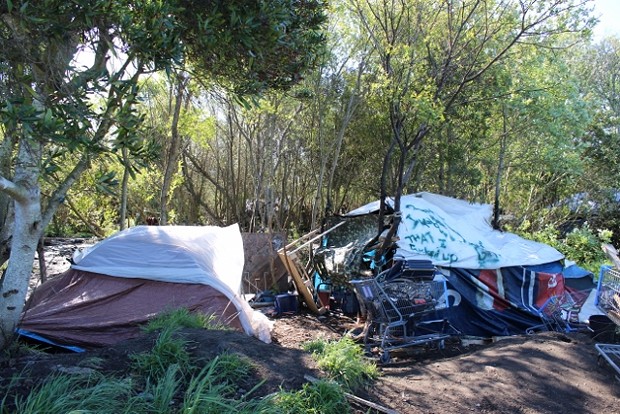 In contrast to prior EPD sweeps of the area, officers left the vast majority of camps intact. Mills said the only camps that were removed were those of the people arrested, and Mills said most were given a chance to identify what of their possessions they wanted officers to store for them before they were taken into custody.

Mills said city officials are working diligently to find a property for the designated camping area and are zeroing on several possibilities, though he declined to identify any. Mills said the city will likely partner with community organizations to supervise the camping area and make sure it’s orderly and safe. But Mills said his vision — in contrast to previous proposals — is not to make the campground a strictly clean and sober environment. Folks camping in the designated area, Mills said, will have “a right to privacy in their tents” but officers patrolling the area will take enforcement action if they see any illegal activity out in the open.

But Mills made clear that the designated camping area is not intended to be a long-term arrangement. “This is a temporary solution,” he said. “I want to emphasize that.” Mills was asked if he expects the designated camping area proposal to meet the type of fierce community backlash similar ones have in the past. “I don’t know, but we’re going to find out,” he said, adding that the city simply cannot afford to wait for a more permanent solution.

EPD Capt. Steve Watson said history has shown the city can’t enforce its way out of the homeless problem, and emphasized that Wednesday’s action was targeted at violent criminals, not down-on-their-luck folks with no place else to go. “It’s not a war on the homeless or a war against homelessness,” he said. “It’s a war against the criminal element that’s out there.”

Meanwhile, out on the wind-blown tracks, between camps strewn with shopping carts, scrap metal and litter, Trish and Donna stood in front of their relatively tidy camps. Both said they look forward to moving the possibility of moving to a designated camping area where they won’t have to worry about illegal camping tickets and can feel a bit safer. Maybe, they’ll even have easier access to some services.

“It’s not like we like living down here,” Trish said, petting her medium-sized brown and black dog. “I hate it.”

Below, see more images of the encampments and Wednesday's sweep, as well as the full EPD press release. 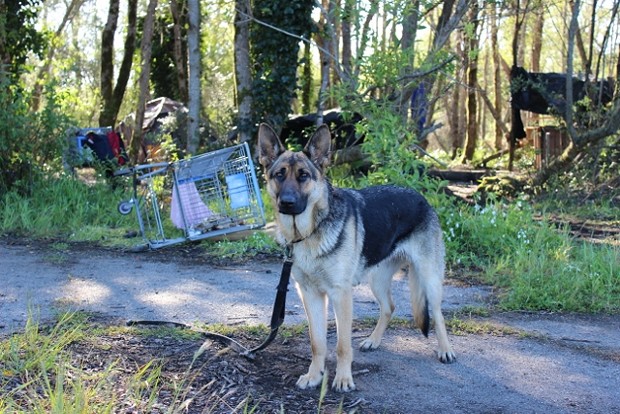 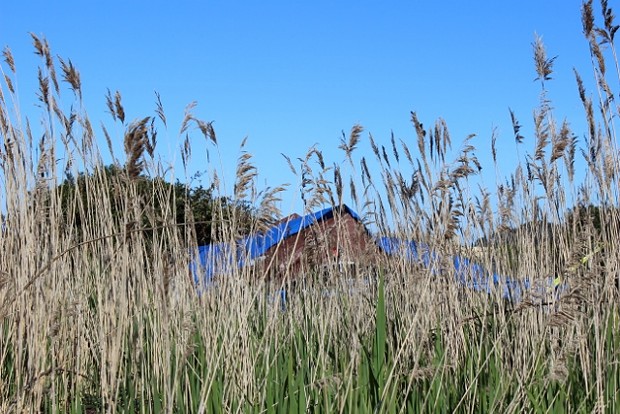 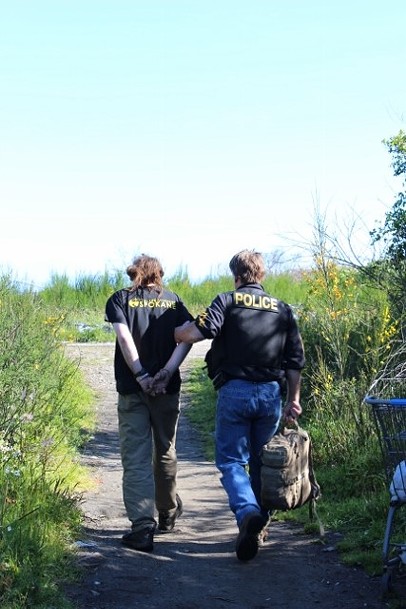 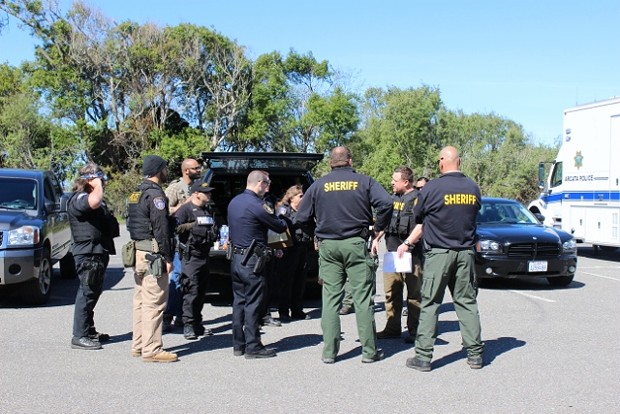 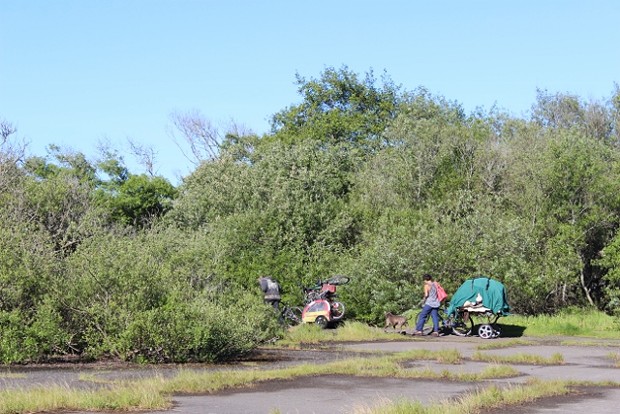 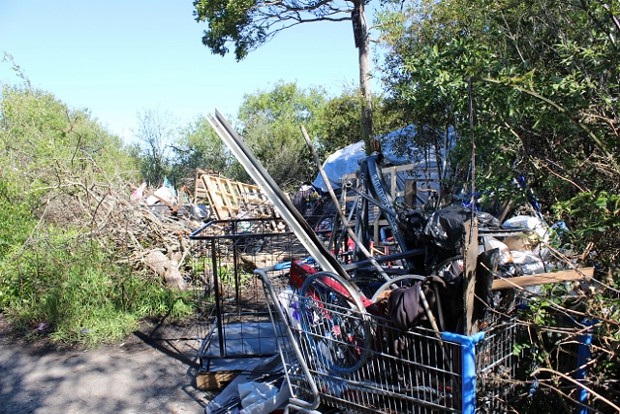 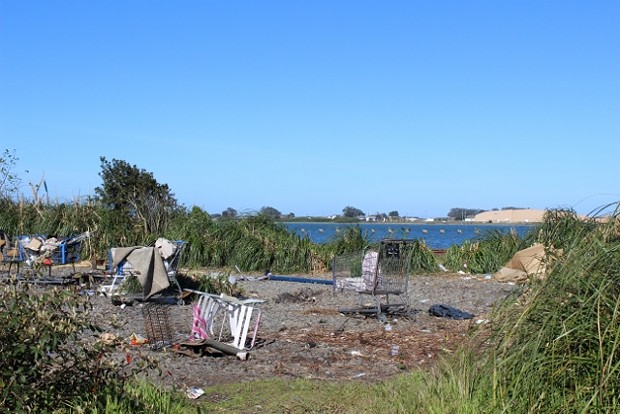 Over the past several months, the Eureka Police Department has observed a significant increase in violent crime, guns, and aggressive theft associated with the illegal encampments in the greenbelt areas surrounding the Bayshore Mall. A more hardened and aggressive criminal street element has moved in creating a dangerous subculture of violence and predation. These criminal predators have sheltered themselves among the more traditional homeless populations along the bay. This group poses not only a much greater threat to overall public safety in the area, but they also victimize the vulnerable among the camps. Most homeless report having been the victim of crime at a rate 50 times that of the general population.

This sweep was a team effort specifically organized to remove the criminal element from among the camps due to the unacceptable level of violence associated with this group. No persons were cited or arrested for camping violations.

During the approximately 5 hour campaign, dubbed “Operation Safe Trails,” officers contacted over 85 persons in and around the illegal encampments. 27 individuals were arrested for a myriad of offenses including 19 warrants (felony and misdemeanor) and 8 new crimes. The fresh arrests include possession of methamphetamine, felon in possession of a firearm and ammunition, possession of a short-barreled rifle, possession of drug paraphernalia, probation violation, and providing false identification to a peace officer. Over 93 individuals were contacted

Joshua Allen Stockhoff (age 27 of Eureka) was located in a makeshift shelter on a small island in the marshland south of Vigo Street. His camp was surrounded by water and officers had to use a small boat to reach it. During a search of Stockhoff’s camp, officers recovered a loaded sawed-off large caliber rifle, ammunition, and body armor.

Stockhoff was arrested for being a felon in possession of a firearm and ammunition and for possession of a short-barreled rifle (two counts each). At the time of his arrest, Stockhoff was wanted on identical charges stemming from a search warrant EPD served at another of his camps on 3/17/15. Stockhoff was booked into the Humboldt County Jail where his bail was increased to $150,000.00.