For the last month, the Eureka Police Department has been under contract to provide daily foot patrols at the Bayshore Mall.

The written agreement between the city and the mall has been in place since March 17, with an EPD officer walking the mall in four- to five-hour shifts, seven days a week, with the city charging the mall $50 an hour for the service. The agreement — which expires today — was apparently reached at the mall’s request, in response to an increase in unsavory activity on the premises, ranging from shoplifting to a recent stabbing. (Issues surrounding the mall also, in part, led to a multi-agency sweep of adjacent homeless encampments Wednesday.)

Asked about the agreement, Rouse Properties, which runs the mall and some three dozen others across the nation, issued the following statement:

“The safety of our customers, employees and retailers is our top priority. We continue to work in unison with the Eureka Police Department and our security company to ensure the well-being of all who visit and work at the mall.”

Informed that the statement, while appreciated, did little to answer the Journal’s questions about the contract with the city and the inspiration behind it, Rouse Properties spokesman Matthew Chudoba referred any additional questions to EPD and city officials.

EPD Capt. Steve Watson said officers have been voluntarily signing up to do the mall duty during their time off, so the agreement isn’t affecting regular EPD staffing or shifts. From the department’s perspective, Watson said the agreement has been a good thing, allowing officers to get out of their patrol cars to interact with citizens and merchants on a one-on-one basis.

Under the contract, the uniformed patrol officers are working for the city — not the mall — with no special enforcement mandates. EPD Chief Andrew Mills said the direction to officers was to provide a visible presence and talk to people. Officers will intervene if they see criminal activity, but aren’t tasked with sniffing out shop lifters or anything like that, he said. As Watson put it, “They’re not down there to make arrests, they’re down there to be visible and make connections.”

Watson said the officers on mall patrol are on special assignment there for the shift, and aren’t expected to respond to other calls for service off mall property, though he did say the officer wouldn’t be prevented from leaving the property to respond to a “major situation, like an officer down.” 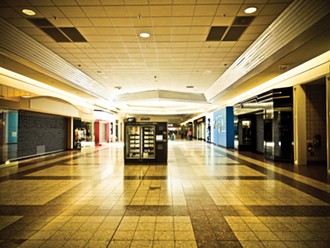 The mall has a private security force, but management felt uniformed EPD officers on regular patrols might help give employees, merchants and customers a sense of security on the premises and deter unsavory activity.

Eureka City Manager Gregg Sparks said he believes it’s the first time the city has entered into a contract with a private business to provide additional police services. Sparks described the contract as a break-even deal for the city, with the $50-an-hour covering overtime pay and corresponding impacts to officers' benefits.

While new to Eureka, it appears these types of contracts are fairly common elsewhere. A New Jersey mall — Rockaway Townsquare —made headlines just a few months back by inking a $1.9 million contract with the local police department for regular patrols of its 1.2 million-square-foot shopping center. Football stadiums throughout the state — and the country — have also made a practice of contracting with local police to patrol games and events.

With Eureka’s first private contract for police patrols winding down, both Sparks and Mills said there have been no talks of renewing or extending the Bayshore Mall agreement. But could arrangements to hire out Eureka police for other patrols be on the horizon? What if Old Town businesses wanted to throw some money at some added foot patrols? What if Henderson Center merchants wanted to do the same?

“If we can get our costs covered, we’re open to those kinds of things,” said Sparks. For his part, Mills was a bit more cautious, saying that he’s leery of spreading officers too thin in a small department. “I think the issue is you can only expect your people to work so much, and it’s difficult in a small agency to supply a constant supply of bodies for those types of things,” he said.

The question also arises whether the city and the department would be willing to provide the same offer to residential areas. For example, what if a neighborhood watch group saw an issue that might be addressed by a short period of extra patrols and raised the funds to foot the bill? The idea seemed to make Mills a bit uncomfortable. “I really hadn’t thought that far down the road,” he said. “I want to be careful that we’re not, you know, providing special police services for those with the finances to pay. I think it’s important for us to police equally in all parts of the city. This was a special circumstance because of a couple of acts of violence that we needed to settle down.”