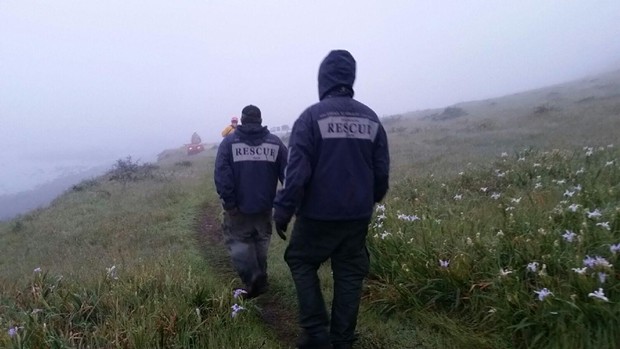 Emergency crews from almost a dozen agencies worked through Saturday night and into Sunday morning to rescue a hiker from a remote area of the Lost Coast Trail, near Shelter Cove.

The crews battled an incoming tide, darkness and heavy fog to get the hiker — who’d been critically injured in a fall — to safety. The full press release from the Briceland Fire Department describing the harrowing rescue is copied below. And for more information on the Lost Coast Trail, check out last week’s Journal cover story here.


On Saturday, April 18, a small group of hikers and dozens of emergency personnel including two helicopters worked against an incoming tide, darkness, and heavy fog to save a man critically injured in a fall. The rescue took place on the remote and rugged Lost Coast Trail between the mouth of the Mattole River and Shelter Cove.

At 7:12 P.M. emergency personnel responded to a call from hikers who had discovered a fall victim with major injuries along the Lost Coast Trail near the beach at Miller Flat, about 8 miles north of the small coastal town of Shelter Cove. With the description of the injuries the man had sustained, we knew we needed to move quickly to get him to a high level of care. The Lost Coast is very rugged and nighttime was coming as well as a high tide at 12:26am.

The Emergency Command Center continued to maintain contact with the people that were with the victim by cell phone. A small group of hikers had discovered the victim towards evening. With the incoming tide, they knew the victim couldn't stay where he was. The hikers built a makeshift litter and packed the victim to higher ground. There they stabilized his injuries as best they could with items they had on hand.

Rescuers quickly developed and put into place several rescue plans so that if one was unable to be carried out another would already be in motion.

Simultaneously, a plan to reach the victim by ground was being implemented. Rescuers responded to the Smith-Etter Road to gain access to the beach at Spanish Flat.

Once the crew members reached the beach, they began hiking about 5 miles south to the victim. By this time it was dark, foggy, and high tide pushed the ocean up against the cliffs. In addition, the crews needed to hike in all required rescue equipment and medical supplies.

The rescuers reached the victim around 2am and started medical care. A new landing zone (LZ) was established on Big Flat where the fog had receded. This was a mile north of the victim’s location and the crew started moving in that direction.

At this time the only option was to pack the victim several miles north to where Shelter Cove Fire could meet the rescuers with their specialized all-terrain vehicle (atv) equipped with advanced life support personnel.

At 6am rescue crews reached Big Creek and transferred the victim to the advanced medical personnel on the atv. They then transported to the medical helicopter where the victim was flown to an out of area trauma center.

This rescue was one of the most complex rescues to date for all the crews involved. The rescue took several agencies and many personnel and could not have been successful without the dedication and team work of all involved. The agencies involved included, Cal Fire ECC, US Coast Guard, Reach Air Medical Services, City Ambulance, and volunteer firefighters from, Shelter Cove Fire dept., Southern Humboldt Technical Rescue Team, Telegraph Ridge Fire dept., Honeydew Fire dept. and Petrolia Fire dept. We would also like to acknowledge the civilian hikers who’s quick thinking and heroic actions helped save a life.