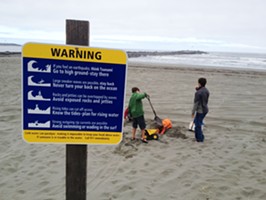 The Humboldt County Coroner’s Office has identified the man who drowned while swimming near Trinidad’s Agate State Beach on Friday Thursday afternoon as 34-year-old Brad Lee Senatore, of Fairfield. It’s the fifth drowning death recorded so far this year in Humboldt County, which typically averages five or six annually.

An experienced diver, Senatore went for a leisure swim in his wetsuit at about 2:30 p.m. when he got caught in a strong current that pulled him south and then west, out to sea. Senatore’s wife was watching and called 911 as he appeared in distress, according to the press release.

A sheriff’s deputy arrived on scene about 10 to 15 minutes later and pulled Senatore from the water and began CPR, but Senatore was later declared deceased by a responding paramedic. For more information on the recent spike in drowning deaths and what makes Humboldt waters so dangerous, see past Journal coverage here.

The full press release from the coroner’s office is copied below:

On April 17th, 2015 at about 2:30 PM an adult male entered the ocean water at Agate State Beach, Trinidad, for a leisure swim. The subject was wearing a wetsuit and was experienced at diving in the ocean. The strong currents in the area quickly swept him south and then west out to sea.

The subject’s wife, who saw that her husband appeared in distress, contacted emergency services and requested assistance. Approximately ten to fifteen minutes later the subject was pulled out of the water by a Deputy Sheriff who had responded to Agate Beach. CPR was immediately started and continued until Arcata Ambulance arrived on scene and declared the subject deceased.

The deceased subject has been identified as BRAD LEE SENATORE, age 34, from Fairfield, CA. This incident is being treated as a tragic accident. The Coroner’s Office would like to remind everyone that the ocean currents are strong in this area and all safety precautions should be taken when recreating in or near the ocean.

Editor's Note: This post was updated from a previous version to correct an error in information originally provided to the Journal.