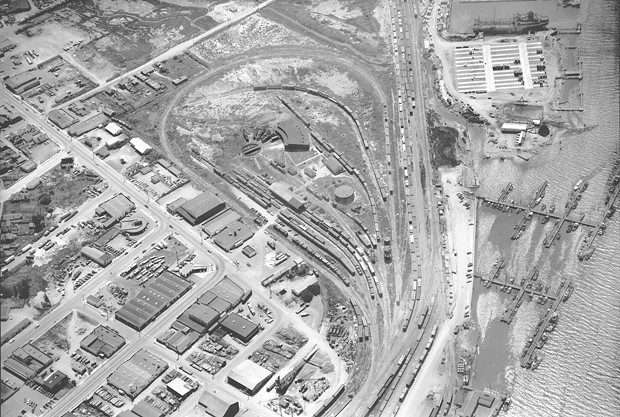 Rob Arkley’s Security National has offered up its Balloon Track property as a potential site for the sanctioned temporary campground for the homeless being proposed by Eureka Police Chief Andrew Mills.

The offer comes about 18 months after Arkley convened a packed community meeting to discuss homeless issues at Eureka’s Wharfinger Building, where he strongly stated his belief that the area was becoming a magnet for ne’er-do-wells looking to take advantage of local generosity, including offers of free food, clothes and housing. “We have become a Mecca for the homeless and we all pay the price,” he wrote in a letter announcing the meeting.

Security National office manager Shirley Fuller said Arkley referred Journal inquiries about the company’s offer back to the city for comment. Eureka Community Development Director Rob Holmlund said the city reached out to a number of private property owners in town when exploring potential sites for a sanctuary camping arrangement, and that Security National indicated it was interested in exploring the possibility.

“It was a very noble gesture, I think, for them to offer up their property to try to help homeless populations have a safe place to be while we bring a range of services to them to help them find homes,” Holmlund said.

The sprawling 43-acre Balloon Track property south of Old Town — the site of Arkley’s apparently stalled Marina Center development — was one of three possible locations Holmlund identified in a presentation to the Eureka City Council on Tuesday. The other possible locations are the north lot of the Bayshore Mall (near Sears), a city-owned property near the Samoa Bridge and the “Crowley property,” which sits south of the mall near the fire department’s training area on Hilfiker Lane.

Asked what criteria will be used to evaluate which of the sites would be the best fit or fits for a designated camping area, Holmlund said the city will take input from nonprofits and members of the public to find a place that offers access to services and minimizes community impacts. And he took issue with the term “campground.”

“It’s not really to provide people a free place to sleep, it’s to provide a safe place for people to be while we connect them with services,” he said. “I don’t really like the idea of a camp at all, but it’s a necessary step to have a temporary place where we can connect people in need with people who can help. It’s not a campground — it’s a place where people can get together; people who need help and people who can provide help. It’s a safe sanctuary where that can occur.”

Mills and Holmlund’s presentation to the council Tuesday night covered a lot of ground, and is well worth watching (it begins at the 2-hour-and-47-minute mark) but we’ll offer a brief summary below for those without the time/interest/attention span to watch the whole thing.

The idea of a sanctuary camp comes as a part of a phased approach to coming up with a community solution to the homeless problem. Mills stressed during the meeting that homeless issues are the subject of daily complaints to his department and “the No. 1 issue that people talk to me about on a daily basis.” Mills stressed that the homeless population and issues associated with it have been growing for decades and cited three contributing factors: a local judge’s decision to increase sustenance programs, “social service giveaways” and leftovers from the marijuana industry (folks lured here by the prospect of growing and trimming jobs only to find themselves unemployable and homeless).

To deal with the population and related issues, Mills said city staff has come up with a four phase plan: Operation Safe Trails, Operation Helping Hands, Operation Clean Sweep and Operation Final Stretch. Safe Trails was executed April 15. Operation Helping Hands (Phase 2) will see the city work to reach out to homeless people where they currently are, bringing a host of service providers to them. “We have a number of systems in place and we need to connect people to them,” Holmlund said.

Operation Clean Sweep (Phase 3) is where the campground, or the “temporary permissible outdoor emergency shelter,” as Mills put it, comes in. The city will create a designated area — or areas (each will accommodate up to 100 people) — and ask all homeless people to move there, after which police will sweep existing encampments, making arrests for illegal camping, and city staff will work to clean up the impacted areas. Mills has repeatedly said he won’t kick people out of existing encampments until he has someplace to send them, and Phase 3 is designed to develop that alternative.

But Mills and Holmlund made very clear this is designed to be a temporary set up, in place for 90 days or so, and is designed to complement — not replace — the rapid re-housing model proposed by Focused Strategies, which the city contracted with to help brainstorm solutions to the homeless problem.

The vision is to have a nonprofit homeless advocate — like Betty Chinn — manage the temporary shelter, doing intake, case management and triage, which would limit the city’s expense, involvement and liability.

Phase 4, or Operation Home Stretch, involves the final conversion of the Multiple Assistance Center into a transitional housing facility for about 100 homeless people, connecting them with mental health, substance abuse and housing services. Additionally, Phase 4 calls for identifying and populating additional low-income housing to get homeless people off the streets and transition the city toward a true rapid re-housing model. Finally, the phase calls for the evaluation of existing programs and, ultimately, the closing of the emergency shelter area.

While gaining momentum, it’s clear this four-phase approach is still taking shape, with many of the funding and operational details still be to be worked out. It’s also clear that not all aspects of it seem to have unanimous council support.

Councilwoman Melinda Ciarabellini expressed concern Tuesday about the temporary campground, saying it blatantly goes against Focused Strategies’ recommendations, which strongly advises against additional sweeps of homeless camps or the creation of a designated camping area, saying these approaches do not solve the underlying problem that these people don’t have a safe or healthy place to live.

“I would just ask, please don’t spend precious city resources on a 90-day solution that goes nowhere to ending homelessness,” she said. “I can’t imagine what his is going to cost.”

City Attorney Cyndy Day-Wilson also made clear that her efforts to determine potential liability concerns for the city are at a preliminary stage, and many details still need to be worked out.

Mills stressed Tuesday that he’s committed to Focused Strategies’ recommendation of a rapid re-housing model in the long term, but said the city simply can’t afford to wait until the systems are in place to put all the people currently homeless into supported or stand-alone housing. The systems and the housing inventory simply aren’t there yet, and the current situation has daily impacts.

As an example, Mills pointed to the greenbelt behind the Bayshore Mall, known as the Devil’s Playground. The area is populated by 100 to 200 people, he said, who live in structures ranging from tarps and tents to semi-permanent makeshift homes crafted from scrap lumber and railroad ties. A population that size, Mills said, produces 25 to 50 gallons of urine and 100 to 400 pounds of human feces daily. That’s a lot of human waste flowing into the bay, not to mention all the syringes, batteries, trash, shopping carts and other debris that comes with the camps. And, he said, there seems to be an escalating violent element in the camps, putting fellow homeless people and the greater community at risk.

Things have gotten so out of hand, Mills said, that he’s been at community meetings where talk of potential solutions has even hinted at vigilantism.

“That’s the one thing I don’t want to see,” he said. “We want to have a civil, orderly society here in Eureka.”

The matter will come back before the council in the coming weeks for approval. Based on Tuesday’s discussion, it seems a majority of council members currently support the idea, but there is some division and it remains to be seen how additional details and public input may change the conversation.

Moving forward, Holmlund said this community has talked a lot about homelessness. Now, he said, it’s time to do something about it.

“Step up and do something, and stop complaining.”