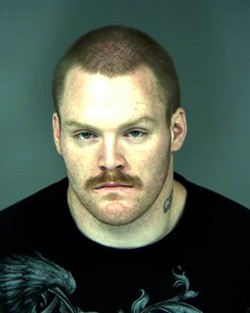 The Humboldt County Sheriff’s Office has identified Nickolas Ryan Joseph Johnson (pictured) as the second suspect in the April 28 assault and murder of David Dwane Ganfield. Johnson is considered to be armed and dangerous. Anyone with information as to Johnson’s whereabouts is encouraged to contact the Sheriff’s Office. Another person of interest, Jonas Randall Semore, was arrested May 14.


A second homicide suspect in this case has been identified as Nickolas Ryan Joseph Johnson age 23. Johnson is further described as a white, male, adult, 5’- 8” in height, 175 pounds, short red hair, with blue eyes. The Humboldt County Sheriff’s Office considers Johnson armed and dangerous. If anyone has information on Johnson’s location, please contact the Humboldt County Sheriff’s Office at 707-445-7251 or dial 9-1-1. If anyone has information on this homicide investigation, please contact Detective Greg Musson at 707-268-3643. An arrest warrant has been signed by a Humboldt County Superior Court Judge for Johnson’s arrest for the homicide death of David Ganfield. The bail amount on the arrest warrant was set at one million dollars.

Eureka Police arrested Jonas Randall Semore, 42, on suspicion of homicide today in connection with the death of David Dwayne Ganfield last month. Ganfield, of McKinleyville, was dropped off at Mad River Hospital on April 28 after an apparent assault. He died two days later.

Semore had been wanted by the Sheriff's Office in connection with the homicide.

Semore was then placed under arrest by the Eureka Police Department for homicide. Semore was transported to the Humboldt County Correctional Facility where he was booked for homicide and his bail was set at one million dollars.

Humboldt County recorded its fifth homicide of the year this morning when McKinleyville resident David Dwayne Ganfield died from head trauma sustained in an apparent assault.

Little is known about the attack. Ganfield was dropped off at Mad River Hospital on the evening of April 28 by an "acquaintance" who quickly left, according to the sheriff's office. Ganfield was unconscious and had no identification, but sheriff's deputies identified him through a law enforcement database. He was transported to a Redding hospital where he died this morning. An autopsy is scheduled for Saturday, and the sheriff's office is seeking information about what caused Ganfield's injuries.

From the sheriff's office press release:

UPDATE:
On 04-30-2015 at about 3:30 a.m. David Dwayne Ganfield succumbed to his injuries and was declared deceased at a hospital in Shasta County. Ganfield’s body will be transported back to Humboldt County today by the Coroner’s Office. An autopsy has been scheduled for Saturday, May 2, 2015. This is the 5th homicide in the County of Humboldt since January.

PREVIOUSLY:
On 04-28-2015 at about 11:45 p.m. a Humboldt County Sheriff Deputy responded to Mad River Hospital in Arcata, regarding a male assault victim who was dropped off at the emergency room by an acquaintance. The male victim appeared to have head trauma and was unconscious. The victim had no identification on his person and the acquaintance had left the emergency room prior to telling the medical staff the victim’s name.

The deputy at the hospital took a photograph of the victim and was able to identify him through a law enforcement database as David Dwayne Ganfield age 36 from McKinleyville. Due to Ganfield’s injuries he was transported to a trauma hospital in Redding. Ganfield is in the intensive care unit and is critical condition.

The Sheriff’s Office is asking for the public’s help for any witnesses who may knowledge on what or who caused Ganfield’s injuries. Also where he was at when he received the injuries to his head.

The investigation has been turned over to the Humboldt County Sheriff’s Office Criminal Investigation Division. Anyone with information is encouraged to call Investigator Greg Musson at 268-3643.