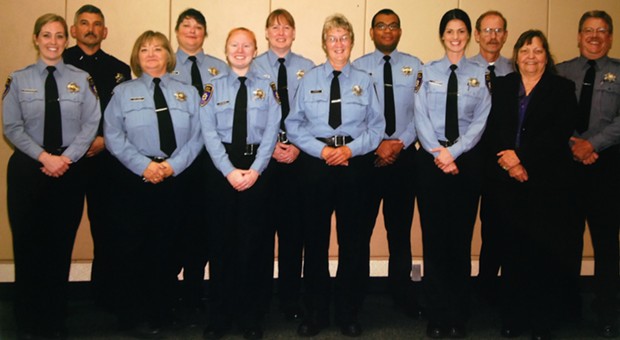 UPDATE: Chief Mills released a summary of his budget proposal on the Eureka Police Department’s blog. Citing the need to make the department more “streamlined and efficient to fill the vacuum created by laying off PSOs and annuitants”, the workload currently carried by police services officers will be redistributed between officers, technical support and citizens.

Officers will:
Citizens will:
Missing persons cases, vehicle abatement and data analysis will be spread between different departments. Two PSO positions will also be repurposed to handle “indispensable functions.”

Meanwhile, bright yellow flyers have been thrust beneath windshield wipers all over Old Town, urging citizens to speak out against budget cuts at the budget hearing on Wednesday, June 3, to be held at Council Chamber at 4 p.m. Fire Station 4 at Myrtle and West is also scheduled to be browned out when the department doesn't have adequate staffing, meaning it will likely be shuttered 200 to 250 days next year, under the current budget proposal.

When you get in a fender bender, when you're caught up in an internet scam, when your daughter goes missing, the person you talk to probably won't be a police officer. It will be a police services officer, a civil servant on the frontline of communication between the public and law enforcement. And due to a budget squeeze, the entire Eureka PSO staff is facing the axe.

Linda Schwend, who works in Speciality Criminal Investigations, does the kind of work you'd expect to see on primetime cable dramas. She visits crime scenes, dusts for fingerprints, books evidence and searches for missing persons. This last duty, she says, is one of the most important and most challenging. Close to 60 people are reported missing in the City of Eureka each month.

"I'm the one who talks to the loved ones," she says, "I let them know that someone cares that their child has gone missing."

Many of the missing are juveniles, and Schwend actively looks for them, calling friends and visiting homeless camps.

While much investigative work falls to sworn peace officers, PSOs alleviate the workload (there are only four patrol officers on duty in Eureka for any given shift) by connecting directly with the public and fulfilling duties for which officers may be overqualified.

"We have more time to be personal," says Suzanne Owsley, who has been with the department for 24 years. Her duties include organizing neighborhood watches, writing parking tickets and investigating fraud cases.

Owsley said the Problem Oriented Policing Unit and PSO officers are more likely to notice a pattern of behavior in a neighborhood. They respond to crimes where there is no suspect and nonviolent "nuisance" calls.

Jeannie Breslin, who lives near Henderson Center, says the POP unit's services were invaluable when her neighborhood turned into "a war zone" due to a drug house.

"There can’t be any quality of life unless there’s a level of safety within your neighborhood," says Breslin, explaining that her next door neighbors were screaming at one another, throwing used hypodermic needles into her backyard and dumping buckets of human waste on neighborhood lawns.

"POP was magnificent. Officer Gary Cooper took this on like a dog with a bone. He wouldn’t let it go. He gave this neighborhood a sense of hope. He validated us in a way I can’t even describe."

Cooper (now a sworn peace officer) was one of several police services officers who made near-daily visits to the neighborhood, an action Breslin said deterred would-be criminals. Officers helped the residents compile a history for a potential lawsuit against the homeowners, who eventually used the history as evidence to evict the troublesome tenants.

Chief Andy Mills says that the PSOs are "wonderful employees who handle a lot of workload that is very meaningful to the police department," but that ultimately it's more important to have a sustainable city budget.

"I’d rather bite the bullet now instead of having it meted out over several years," says Mills, "I don't want to live in this limbo land every year not knowing what’s going to happen. It’s important for residents to know what the Eureka Police Department can offer in upcoming years."

He added that to make a "livable city," funding police and fire departments can't be the only priority.

"You need many different parts of the city, Parks and Rec for example. After school programs are critical for preventing future crime. Safety is strategically important, but you also have to think long term."

The police department is just one of many facing cuts due to a $2 million budget shortfall. The City of Eureka is expected to compensate for changes in its pension payout plan and unfunded liabilities by cutting $1.7 million from the police and fire departments.

Mills said that some duties performed by public services officers will be eliminated. Non-injury traffic collisions, for example, will no longer be a police matter. Instead those involved will exchange information. Other duties will be divided between officers and clerical staff, and several new positions will be created to subsume PSO duties.

Nine PSO positions, an animal control officer and as many as six annuitant part-time officer positions may be eliminated if the proposed budget for the City of Eureka goes through. A budget hearing is scheduled for public comment at 4 p.m. on June 3.