Watson Hanging up His Robe 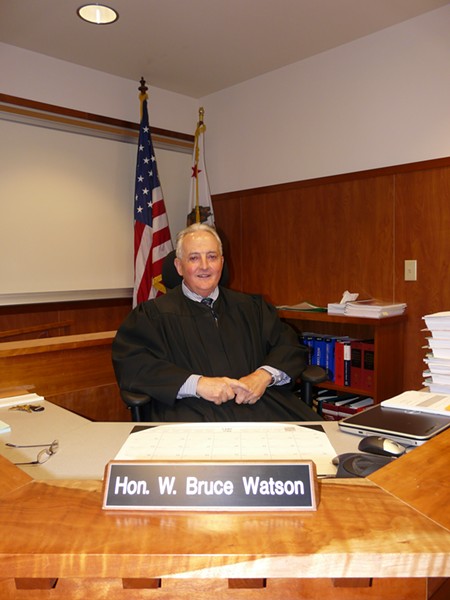 Watson’s six-year term was slated to run through the end of next year, but he announced today that he will be retiring in January, after 23 robed years in the Humboldt County Courthouse. The governor will appoint a replacement to finish out Watson’s term.

A local product, Watson followed in his father, William Watson Jr.’s, footsteps. In fact, while in middle school, the younger Watson used to go to the courthouse after class and sit in the back of Courtroom One and watch his father work. Decades later, Watson took his father’s very seat, ruling the bench with his dad’s photograph hanging on the courtroom wall, along with those of other past Humboldt judges.

Born in Berkeley but raised in Humboldt, Watson served in the U.S. Army as a platoon leader in Vietnam, taking home a Bronze Star. He later attended law school at University of the Pacific’s McGeorge School of Law, after which he returned to Eureka and went into practice with his father after 10-year a stint with the public defender’s office.

He was elected as a municipal judge in 1992 and became a superior court judge in 1998. Since then, he’s presided over some of Humboldt County’s highest profile cases, including the spousal rape trial of former Blue Lake Police Chief David Gundersen, the Skilled Nursing class action lawsuit and others.