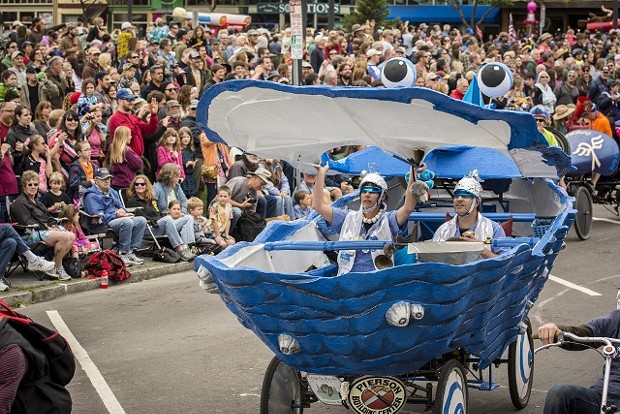 “Kinetics is for everyone,” according to the official rules for Humboldt’s human-powered sculpture race, and Rule A reads, “Amusement is the gift we give and get, so all KGC participants, volunteers, spectators, and innocent bystanders must try their best to have FUN at all times.”

This preview guide to the 47th annual Kinetic Grand Championship was prepared for spectators and innocent bystanders with Rule A in mind. It contains our advice on how to have fun and where to best watch the Kinetic action during the three-day race. Be sure to get a copy of the Kinetic  Rules  and a race  maps  before you start your weekend. (Follow the hyperlinks for PDFs of both.)

The race begins at noon Saturday at the Arcata Plaza (“In the event of sun, the race will still be run…”) but be there between 10 and 11 a.m. This is a very child-friendly and accessible location, but it will be crowded. 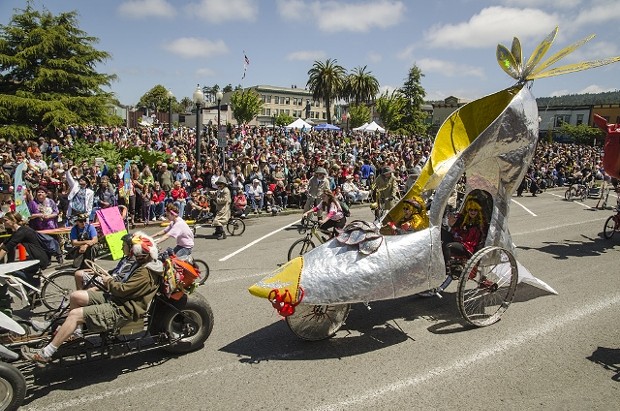 Don’t miss the pre-race activities as the racers arrive and Kinetic officials, using the Kinetic Rules, check each sculpture for required items (such as a tooth brush and an item of “personal comfort,” i.e., a teddy bear). Costumed racers begin their pursuit of the Hobart Brown Lifetime Achievement Award, breaking out their most creative bribing of officials and judges and their best humor, theatrics and "glorious" appeals to the crowd.

Throughout the three days of the KGC, be sure to introduce yourself to at least one Rutabaga Queen and collect as much bribery and other swag as possible from the racers. Look for the extraordinary sculptures created by the experienced old-timers such as June Moxon and Ken Bidelman. (Long-time Kinetic favorite Duane Flatmo announced earlier this week on his Facebook page that, after 33 years, he's taking a trip to celebrate his 30th wedding anniversary and won't participate in this year's race.)  Also inspect the entire collection of race sculptures and make your own predictions about likely winners of prizes for art, engineering, speed and Grand Champion (see the Rules for these and other awards).

Things get serious as noon approaches with the official brake-test for each sculpture, so start looking early for a viewing space around the plaza for the LeMans-style start when the noon whistle kicks off the race. Kinetic Universe board member Chris “Blaze O’ Glory” Boyle said in March that the recently retired fire department siren will be brought back to Arcata on race day and will sound at noon just as it always has.

At the sound of the siren, racers dash to their sculptures and circle the plaza a few times before heading west on State Route 255 toward the Samoa Dunes. The next close-up viewing opportunity of racers and sculptures is during the pit break at the Manila Community Center, just before the racers head across the dunes for the ocean beach.

“My favorite spectator spot is Dead Man’s Drop if you’re up for the hike through the dunes and forest,” said 2008 Rutabaga Queen Kati Texas. “There’s a spectacular view of the racers making the drop. People watch for the same reason they watch NASCAR races.” 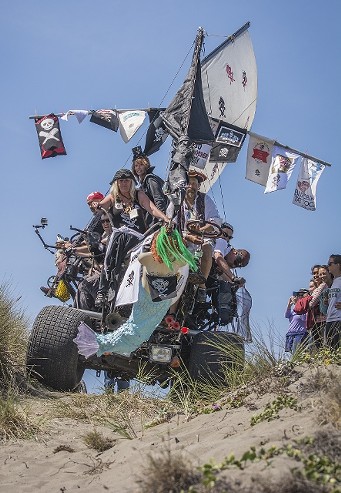 Time your long, sandy (non-accessible) walk in mid-afternoon out to Dead Man’s Drop in the child-friendly dunes and don’t forget to bring sun screen, water and bug repellant. (Park along the highway near the Samoa Cookhouse turn off.) If you’re looking for the first real test for any sculpture looking to “Ace” (see the Rules), keep walking past Dead Man’s Drop out to the ocean beach and watch the racers attempt to make their way from the beach through “June’s Dunes.”

Day One ends for the racers as they camp at Halvorsen Park along the Eureka waterfront. You can join the adult-oriented party, listen to live music and watch the racers prepare their sculptures for Sunday’s water adventures.

Sunday, Day Two, begins with great viewing opportunities as officials conduct another safety inspection (the crews are timed as they practice exiting their sculptures). The racers next compete one at a time for the “Biggest Splash” prize with their Water Entry starting at 11 a.m. near the Wharfinger Building at the Eureka Pubic Marina, 1 Marina Way. You have to get there early for a space to see close-up views of the early “splashes” but the crowd thins a little over time. The viewing is accessible and child-friendly anywhere near the Adorni Center, or along the waterfront as the racers float, paddle or are towed to the take-out location at the boat ramp under the Samoa bridge. You could also watch the action by joining the flotilla of boats on the water.

The next close-up viewing opportunity is at Eureka Natural Foods, 1450 Broadway, as the racers stop for lunch, before they head out of town following the Hiksari’ Trail. Another favorite is to watch the racers slog up Hookton Hill, a one-mile, 7-percent grade (take the Hookton Road exit on U.S. Highway 101), and follow the racers as they are rewarded with a long downhill run into Loleta. They end Day Two at Crab Park with a private campout for racers and volunteers only.

Monday, Day Three, begins for spectators at 1 p.m. as the racers begin to enter Ferndale. No public access is provided to their morning activities. Watch out for sculptures and drive carefully as you exit Highway 101, cross Fernbridge and take State Route 211 into Ferndale. Expect to park more than a few blocks from the blocked-off Main Street area.

The Kinetic Grand Championship ends as the racers cross the finish line on Main Street. It’s basically a child-friendly and accessible street party that lasts all afternoon as the racers straggle in. There’s quite a gap in time between the first-to-arrive winner of the Speed prize and the last sculpture to arrive, leaving plenty of time to enjoy food and beverages, shop in the galleries and stores, and mingle with the exhausted racers and support crews. This is your last opportunity to get close-up views of the sculptures. KCG participants end their day at the Final Awards Dinner — but it’s not open to the public.

Throughout the weekend, you can listen to race coverage on KHUM radio’s “Kinetic Blog” (www.khum.com) or watch the live stream provided by KIEM News Channel 3 (www.kiem-tv.com).

The former Kinetic Museum in Ferndale has been closed since 2013, but has recently re-opened in Eureka at 110 Third St., Unit G. It’s typically open Friday through Sunday from 2:13 p.m. to 6:32 p.m. but will not be open during the KGC weekend.

For more information, visit www.kineticgrandchampionship.com or call the Kinetic hotline at 786-3443.

And, remember, have FUN. 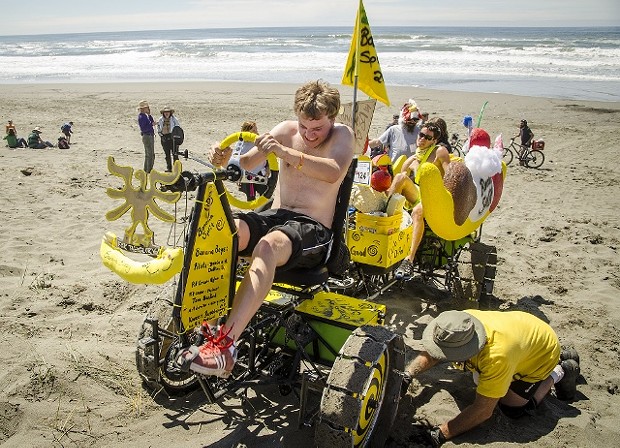 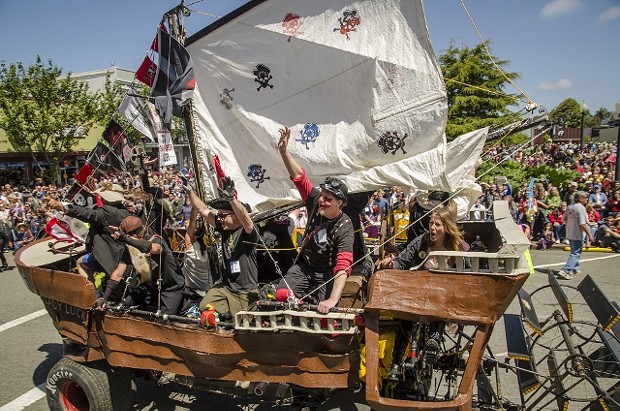 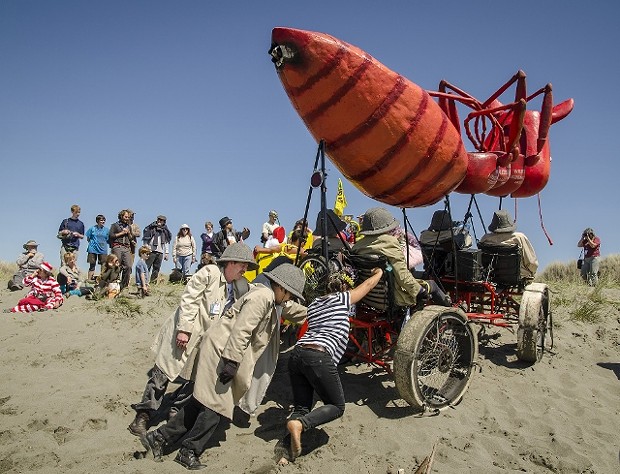 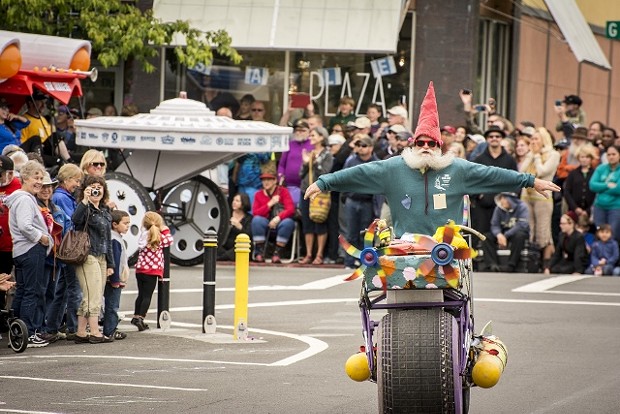 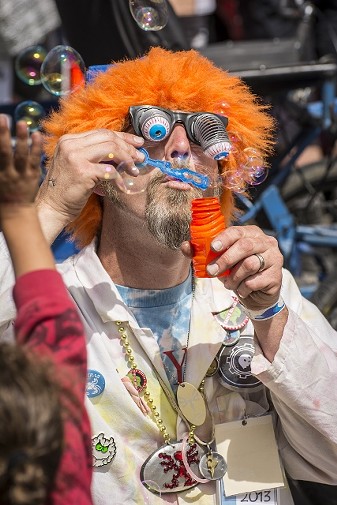 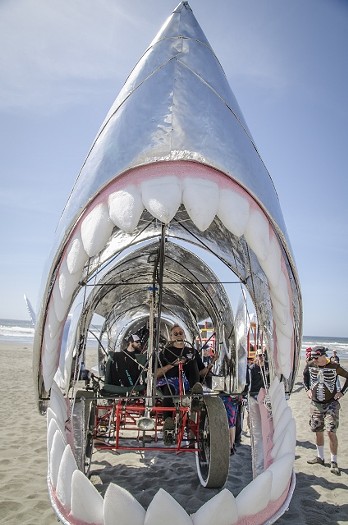