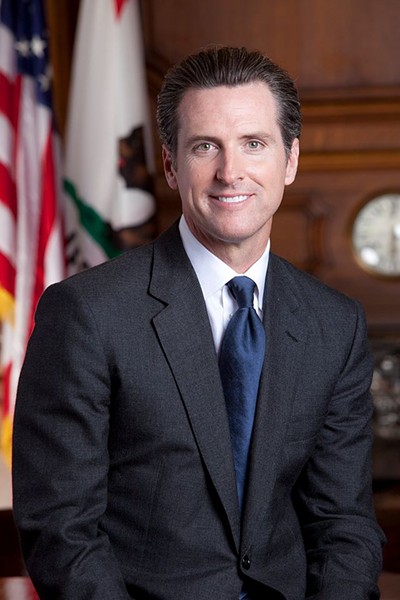 And Huffman spokesman clarified for the Journal that Friday's forum isn't officially part of Newsom's committee work on the subject of marijuana regulation, but that Newsom plans to report back to the committee whatever he learns during his stay in Humboldt.

Newsom, who’s leading a committee looking at regulations for potential statewide marijuana legalization in 2016, is slated to appear at a “public forum on marijuana policy” being put on by North Coast Congressman Jared Huffman on Friday afternoon in Garberville. But, it remains unclear if the event will be open to the public, as Huffman’s spokesman wasn’t immediately available for comment and calls to Newsom’s office went unreturned Friday.

It’s also unclear whether Friday’s meeting is a part of the official listening tour being carried out by Newsom’s committee — which includes former Humboldt County District Attorney Paul Gallegos. The committee hosted its first forum back in April at the University of California Los Angeles.

Rumors of Newsom’s visit have been swirling since late last week, when Huffman’s office sent out invites to Friday’s event. The invitations — one of which was obtained by the Journal — ask folks to RSVP to Huffman’s office, and bill the forum as a discussion of “the unique public policy challenges related to marijuana legalization affecting California’s North Coast.”

The visit comes on the heels of one in April by members of the State Board of Equalization, who spent a couple of days in Southern Humboldt touring marijuana farms and Wonderland Nursery to help inform potential future tax policies. Huffman and Newsom’s forum also comes as California Cannabis Voice Humboldt is putting the final touches on the latest draft of its land use ordinance initiative, which seeks to regulate and legitimize outdoor marijuana cultivation on large parcels within the county.


The following is the press release from Huffman's office:

Huffman and Newsom will meet with a diverse group of stakeholders, including local governments, marijuana advocates, law enforcement, environmentalists and regulators to explore concepts for a common sense framework for marijuana, post-legalization.

From Hwy 101 North: Take 1st Garberville exit, continue onto Redwood Dr. through town, and turn left at the stop sign onto Sprowel Creek Rd. Cross over highway and theater will be on your left attached to College of the Redwoods Instructional Site.

From Hwy 101 South: Take 2nd Garberville exit for Sprowel Creek Rd. and turn right at top of off ramp. Theater will be on your left attached to College of the Redwoods Instructional Site.