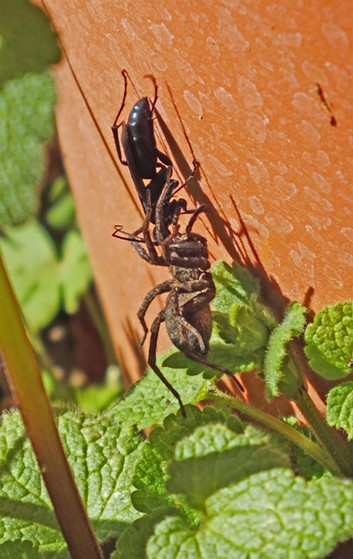 Working in my garden, I noticed a small blue black wasp flicking its shiny wings as it dashed across the dirt, searching here and there. I can hazard a guess as to what it was looking for: a spider. Much has been written about the social wasps and their organization, diligence and sacrifice for the sake of the hive. Always willing to “take one for the team,” yellow jackets, paper wasps and bald faced hornets are the very model of teamwork. 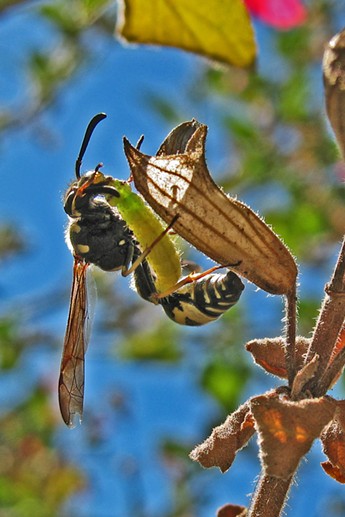 Not being a team sports kind of guy, I prefer the solitary wasps. There is incredible variety in their lifestyle and shapes, but one thing binds them together. They are parasitoids. Unlike fleas and vampires, the wasp's hosts invariably die at the end of the relationship. Think of the monster in the Sigourney Weaver Alien movies. After mating, the female wasp hunts for suitable food for its offspring. Some species are quite catholic in their prey, while others can be very picky. Many of the tiniest merely find a host like a caterpillar and inject eggs directly into it. That victim will carry on its life while the larvae consume its innards. I have found dead caterpillars with dozens of tiny cocoons sticking out all over it. Many build nests like the mud dauber or mason wasps. 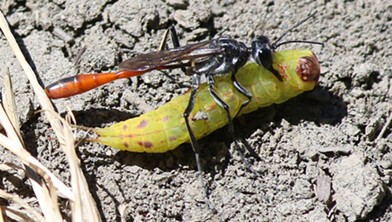 My little black wasp digs a hole in the ground and hunts spiders as large as she is, diligently dragging them back to her lair. At that point there is no hope for the hapless arachnid. The wasp's venom is totally paralytic, it will not wear off, so even if the wasp abandons her prey it is doomed. Usually, though, she manages to get it to the nest, lay an egg on or near it, and then seal up the cave. Alone, paralyzed in the dark, the spider can do nothing but await the tiny grub which will carefully consume it, avoiding any essential organs to the very last, thereby allowing the life processes of the spider to keep the meat supply fresh as long as possible, only consuming vital organs at the very end. The larva, having molted five or so times, will be at full adult weight and pupate (form a cocoon), emerge as an adult and continue the cycle. Curiously, the adults do not eat meat, but consume nectar from flowers. 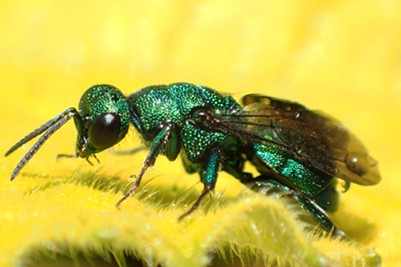 Within that general outline there are myriad variations. The often brilliantly metallic colored cuckoo wasps lay their eggs in the brood chambers of other bees or wasps. Their larvae eat the host's egg or larva, then consume the provisions furnished by the adults. (These are known as kleptoparasites.) The strangely shaped leucospid wasps are hyper-parasitoids, using their long ovipositor to inject their egg into the brood cells of bees or other wasps.

Another reason I prefer the non-social species is they are much less likely to sting me. The social species concentrate resources in a valuable package which attracts larger animals to feed on the bounty they've collected. Their instinct is to protect the hive at all costs and their venom is designed to discourage vertebrate hunters, while a spider hunter's venom is crafted to paralyze tiny arachnids. And if I do provoke an attack there aren't nearly as many of them.