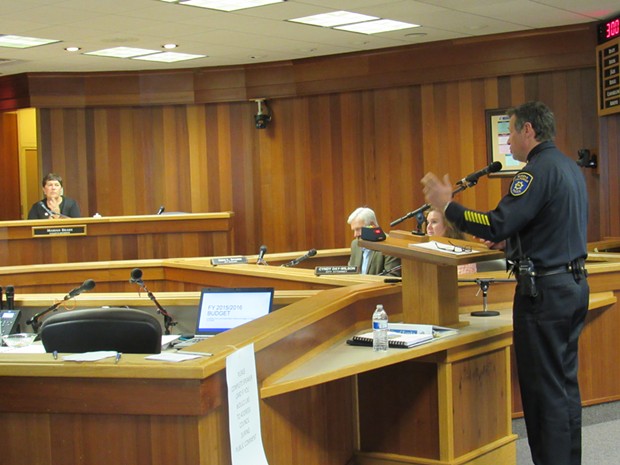 UPDATE: A second budget meeting, held last night, explored options to preserve funding for public safety, according to an article in this morning's Times-Standard. Council Member Melinda Ciarabellini suggested halving funding for Eureka Main Street and the chamber of commerce and cutting funding entirely for such organizations as the Retired Senior Volunteer Program and the Boys and Girls Club. Council members Linda Atkins and Marian Brady objected to these suggestions, although Atkins did support the idea of contributing less money to the Humboldt County Convention & Visitors Bureau.

The council is slated to continue its budget discussion at its regularly scheduled meeting on June 16.

Firefighters, police officers and concerned citizens packed Eureka City Council Chambers last night to discuss proposed budget cuts. Both the Eureka Police Department and Humboldt Bay Fire are being asked to dig deep to compensate for a $2 million city budget shortfall, arousing the ire of voters and some civil servants.

Three weeks ago, EPD's police services officers were told their positions were being eliminated entirely, prompting several of them to sound the alarm to citizens and the media. A total of eight employees and six annuitants are facing the axe, saving the department $849,000.

The announcement that Humboldt Bay Fire will brown out (partially close) its Myrtle Avenue station inspired a public dustup between the fire union and city employees, with Parks and Recreation Director Miles Slattery firing off a scathing response mere hours after an op-ed was published by Jeff Broberg, a representative for the Humboldt Bay Professional Firefighters union. Broberg's call to action: Voters should see Measure Q money go to public safety as intended. Slattery's response: Maybe if the fire department implemented shift changes (switching to four 10-hour shifts rather than 48-hour shifts) they wouldn't acquire so much overtime expenditures in the first place.

In a phone call, City Manager Greg Sparks was diplomatic about the rift. No, he didn't know if Slattery was on the clock when he made such a public dismissal of Broberg's op-ed. Nor do city employees have a gag order that prevents them from publicly commenting on such issues. Sparks' office issued a press release shortly after Slattery's letter was published, with a detailed budget and a denial that Measure Q money has gone toward city services other than public safety.

Every seat was filled by the time the Pledge of Allegiance was said at the budget hearing. A phalanx of uniformed police officers and firefighters stood at the rear of the room. Occasionally tones would sound from emergency radios, followed by the low, muffled voice of a dispatcher. After a brief presentation by Sparks and City Finance Director Wendy Howard, Fire Chief Ken Woods hobbled his way to the mike. (Woods recently fell off a retaining wall and is on crutches.)

Woods used a Powerpoint presentation to contrast the department's goals against the necessary cuts. Among the priorities: Repairing Station 2 (Herrick Avenue), replacing and repairing equipment, public education. Among the cuts: training of volunteer firefighters, some public education efforts, and staffing of Station 4 (Myrtle Avenue) The presentation was followed by a protracted question and answer session between Woods and the city council.

Council Member Kim Bergel (Third Ward) said she'd received a lot of concerned calls from seniors about the browning out of Station 4. Firefighters at that station are the first responders to many medical calls at nearby assisted-living facilities.

"If my grandmother's stuck in the bathtub and I need help, who am I going to call?" she asked.

Woods spoke at length about transitioning to proactive rather than reactive response to medical emergencies, citing programs in other cities such as Mesa, Arizona, where fire departments partner with ambulance companies rather than sending out full trucks.

"When we're helping with a medical emergency there could be a four-alarm fire that requires that equipment," Woods said. "Unfortunately we can't scale down our trucks. It's the full team, the full equipment, on every call."

Woods said the increase in response time to areas currently served by Station 4 by other units would be a total of two minutes.

Council Member Marian Brady (First Ward) asked if it was feasible to change the shift schedules for firefighters, as referenced in Slattery's letter. Woods responded that a four-10 schedule was a good fit for police officers as they work individually, but research has proved that firefighters function best in 48-hour sleeping shifts, bonding as a team.

Woods ended his address by saying he was "very proud" of his firefighters and the work that they do. He crutched back to his seat amidst a round of applause.

Next, Police Chief Andy Mills presented the proposed cuts to his department. The subhead of his Powerpoint: "Fighting Through Pain to Build a Future."

He led with the success stories: building a team to address homelessness, community crime prevention, departmental transparency. Then he clicked to a slide titled "The Pain: More Than Numbers."

"We have to eliminate PSOs," said Mills, referring to police services officers, "I don't like it, I've lost sleep over it. It's like losing family members. But it has to be done."

A total of nine fulltime PSO positions are slated to be cut, with two new positions being created to absorb essential functions such as evidence handling. Other changes proposed by Mills included no longer taking dogs to the Humboldt County Animal Shelter, saving a total of $130,000 a year.

Council Member Melinda Ciarabellini (Fourth Ward) was skeptical of this last proposal, asking Mills where the dogs would be kept, and for how long.

Mills was vague on the first issue, but said if the animals weren't redeemed within six days (with an estimated income revenue of $85 per animal) they would take adoptable animals to rescue organizations and dispose of dangerous animals.

Ciarabellini said the idea was rife with problems. What about animals besides dogs? Who would be looking after the animals?

Other council members quizzed Mills about proactive policing measures to compensate for the loss of PSOs, including surveillance cameras, neighborhood watch groups and the possibility for citizens to file their own police reports using online software.

At around 6:30, a call crackled through and the firefighters filed quietly from the room. At 6:35 the audience heard the wail of a siren. The meeting, scheduled to go from 4 to 7 p.m., had just entered the public comment phase at 7 p.m. During a short break, Bergel said the council had hard choices to make.

The room had half-emptied by the end of Mills' presentation, but around 15 citizens went to podium to express their concerns about public safety cuts.

"My son won't come visit me here in Eureka without bringing a gun, that's how bad it is," Lorene Dunaway told the council.

"You've given your suggestions, now I have a few suggestions for you," said Sylvia Scott, "Cut from somewhere else. Why are we cutting from public safety and funding the Sequoia Park Zoo? If you get raped, who's going to help you? A zookeeper? I don't think so."