County Rainfall Totals at a Glance 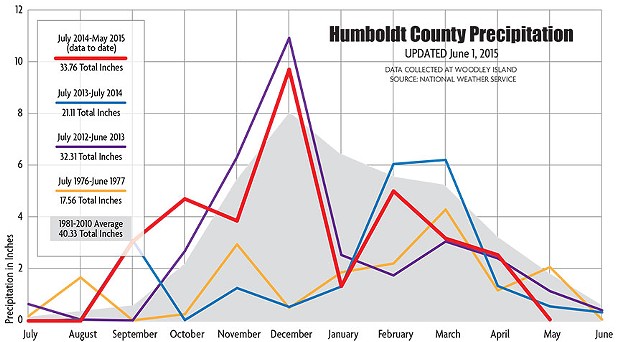 As the water year creeps to a close, on the heels of Humboldt's third driest year on record, it seems a good time to dust off the Journal's rainfall chart to take stock of where we stand. Humboldt's 2014-2015 water year (July 1 through June 30) has been wetter than the past couple, filling Ruth Lake to capacity and generally easing water worries. But we still sit about 16 percent below the 30-year average and eight of the 11 months recorded so far this year came in below historic averages.The good news is the other three months — September, October and December — saw rainfall amounts well above their 30-year averages. So, having already seen 12.66 inches more rainfall than last year, things are looking up.

Meanwhile, the same can't be said in the rest of the state, which is historically dry with an almost nonexistent snow pack. A recent California Public Policy Institute survey found that drought and water top the average Californian's list of concerns right about now, with 39 percent of respondents saying its the state's most important issue. That's almost double the number who sited jobs and the economy (20 percent), the concern that seems to perennially top the list.