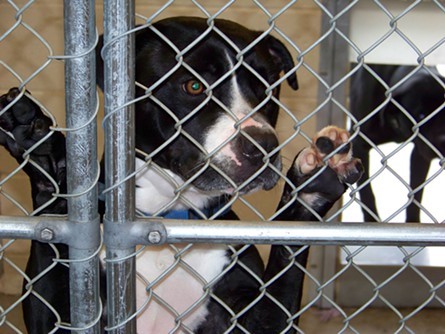 Suzie Owsley is going through old files at the Problem Oriented Policing office in Eureka, organizing for whoever steps in once she and the rest of the team move on. Owsley is one of eight police services officers with the Eureka Police Department whose position was eliminated in sweeping budget cuts passed by the city council last night.

“Right now we’re waiting to see who will get the administrative jobs. Most of us have applied for other jobs within the city or the county,” said Owsley, adding that it was “very nice” to hear the support of citizens who showed up to budget meetings to voice their concerns.

The administrative positions — three total — were created to compensate for the loss of police services officers. To squeeze in the amount of jobs Eureka Police Chief Andy Mills requested, as well as renew the department’s $130,000 memorandum of understanding with the county animal shelter, the city’s finance department had to dig deep. In an addendum submitted last week, the city proposed cutting its support to the Humboldt County Convention and Business Bureau by an additional $45,000, eliminating a position within the finance department, and increasing zoo fees, among other changes. The proposed budget with the addendum was officially adopted last night. Despite complaints from citizens and union representatives, no changes were made to the proposed $708,000 to be cut from Humboldt Bay Fire, which will result in the partial closing of the Station 4 on Myrtle Avenue.

The city of Eureka released another proposed budget addendum that will come before the city council at its June 16 meeting, when the council is expected to make final decisions about how to bridge a $2 million deficit.

The addendum includes provisions to preserve the city's memorandum of understanding with the county animal shelter, a $130,000 yearly expense. A proposal by Eureka Police Chief Andy Mills to sever ties with the county and handle animals through the police department was criticized by Council Member Melinda Ciarabellini at the June 4 budget meeting. Local animal rescue groups also expressed concern.

On Thursday, EPD put up a jubilant blog post titled, "Dog Gone Happy" which included a link to video of frolicking pups, and an explanation that City Manager Greg Sparks had "sharpened his pen and made cuts from his budget and others to find the money to fund the animal shelter."

While abandoned dogs may still be getting a free ride up to McKinleyville, other organizations and city employees will be feeling the pinch.

The budget addendum includes an additional $77,915 generated by eliminating an administrative technician within the finance department and reducing the duties of engineering staff. Further cuts effect community organizations such as the Clarke Museum and the Boys and Girls Club, which will see a 10 percent decrease in contributions from the city. An increase in zoo fees is projected to bring in $70,000 over the next fiscal year. The city also added funding for an adminstrative technician at EPD, bumping the number of new positions meant to compensate for eliminating police services officers up to three.

One of the biggest cuts included in the budget proposal is to the Humboldt County Convention and Visitor's Bureau. An additional $45,000 is due to be cut from the city's contract with the bureau.

"It’s important for people to understand we’re not an income drain, we’re a revenue generator," said Smithers, who said that bed tax in the city is up "handsomely" and that they are projecting a record year in tourism income.

Complicating the issue is the bureau's large fiscal commitment to Fly Humboldt, a commitment that was made, Smithers said, "at the urging of the city." According to Smithers, the organization had allocated $250,000 for Fly Humboldt over the next two fiscal years.

"There's a basic conflict between these two requests," said Smithers, adding that board members plan to meet with the city council to discuss the dilemma. "We might need to back off from our commitment to Fly Humboldt."

While it looks as thought the council is responding to citizen concerns about cuts to the police department, no amendments have been made to the proposed budget that would preserve staffing levels at Fire Station 4. Humboldt Bay Fire Chief Ken Woods sent out a press release today saying that the station, located on Myrtle Avenue, will begin closing on days when it is understaffed on July 1 (in a previous interview with the Journal, Woods said he expects the station to be closed between 200 to 250 days next year). Station 3, on Ocean Avenue, may also close periodically.

City Parks and Recreation Director Miles Slattery, who publicly rebutted concerns from Humboldt Bay Professional Firefighters union representative Jeff Broberg via dueling op-eds on June 1, said in a phone interview that while there has been public uproar about cuts to public safety, his department has been suffering in silence for many years.

"I’ve told many people I’m waiting for the day for an elected official to go up there and say we need to find money for the quality of life things like parks," said Slattery. "It’s always been cuts to everything but public safety. It gets to the point where you just can’t cut anymore. You need to provide quality of life. You could have a cop on every corner and it wouldn’t make a difference."

According to Slattery, his department has lost a total of six permanent employees in the last four years. He has worked to compensate for the losses by collaborating with non-profits, utilizing volunteers and cross-training existing staff. Slattery said that the goals of his department are complementary to public safety efforts, using the example of encampments in local parks. Previously, Parks and Recreation had a full-time staff supervisor for each park. Currently, according to Slattery, local parks are being impacted by "property crimes, vandalism and homeless camps ... We come across feces, needles, vandalism, graffiti."

Slattery said that Parks and Recreation programs provide an important role in preventing crime by offering after-school programs and free summer camps, echoing the words of Chief Andy Mills in an earlier interview, in which he said parks and recreation were essential to have a "livable city."

Slattery added the op-ed was not written during work hours, but was a compilation of a series of texts he'd written "to a friend," over the weekend and that the response he received was very encouraging.

"I've gotten about 15 to 20 emails in response, all positive. Everything I wrote in that op-ed had been discussed in multiple meetings, including those with [Humboldt Bay Fire Chief Ken Woods]," said Slattery. "Divisions within Parks and Recreation have been attacked for so long it's hard to sit back and take it. We’ve been bleeding for a very long time, we never pled poverty, we always took it like a team. It just doesn’t make fiscal sense not to consider every option."