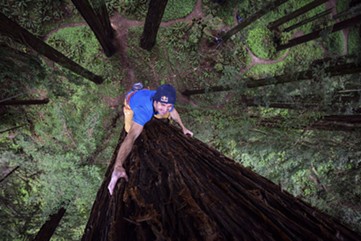 Chris Sharma (kind of a big deal among people who scale things, mostly rocks) filmed a climb up a redwood tree in Sequoia Park last month. The renowned climber, who hails from Santa Cruz, spider-monkeyed his way up the 600-700-year-old, fire-scarred trunk with his bare hands, a lead rope and no other gadgetry.


You can learn more about the climb here, and you don't have to feel all click-bait gross about it — sponsor Red Bull is donating $ .10 per unique view to redwood research.

Do we even have to tell you not to try this on your own? Sharma and Red Bull (kind of a big deal among beverages that get you all hopped up) had to get a filming permit from the Humboldt Del Norte Film Commission and a special events permit from Eureka's City Clerk's office. Eureka Parks and Recreation Director Miles Slattery says the special events permit, the kind required for something like a kinetic sculpture race, required about $2 million in general liability for starters, and the parks supervisor had to deem the climb not dangerous to the tree.

"A person who weighs — what was he, 170 pounds?" Slattery chuckles, "is not going to cause any damage to a redwood tree." Slattery also pointed out that the small spikes that held the lead rope only pierced the bark, not the cambium, and so caused no damage to the tree. But this was a one-time thing — Slattery says he's not so sure climbing would be harmless if scores of people did it.

So save a tree and the wrath of Parks and Recreation and just watch the video. Besides, it looks exhausting.