A backburn lit by an incident team on the Saddle Fire reversed direction on June 12, jumping the county road to burn 150 acres of private land and threaten the lives of three Hyampom residents.

“We asked them not to light the backburn,” said Jennifer Lance, whose husband, Richard Collins, beat the blaze away from their rural home with the help of two friends. Their property, she said, now resembles “a moonscape.”


Northern California Incident Team 2, an interagency management team called in by the National Forest Service, took control of the firefight at 6 a.m. on the morning of June 12. At the time the Saddle Fire was less than 10 percent contained and had burned 950 acres. According to U.S. Forest Service Public Information Officer Corey Wilford, a hotshot team assessed the area and determined that the best way to combat the fire was to start a fire at the bottom of a mountain close to Lance and Collins’ property. Firefighters accomplish this either by using a drip torch or flares. The goal is to remove fuel in the wildfire’s path, creating a “buffer zone” around structures and other key areas. In this case, the buffer was around County Road 311, which winds along the south fork of the Trinity River.

At around 5 p.m. Lance began getting frantic calls from her husband, asking her to call 911. The fire had jumped the road and was beginning to eat its way toward their home. Lance, who was on the coast with the couple’s two children, called 911 and the Forest Service’s public information officer repeatedly, begging them to send vehicles to protect the house. Meanwhile, Collins and his friends began to fight the fire themselves, using fire pumps and a bulldozer. One friend ran to the county road and flagged down a Cal Fire crew, which came to defend the house.

“They saved our lives,” said Collins.

Lance said she had difficulty obtaining information from 911 or the public information officer about the state of the fire. Additionally, the couple allege that they were never given the order to evacuate. In previous years (this would have been the family’s third mandatory evacuation order in 10 years) a representative from the Trinity County Sheriff’s Office visited the home personally to tell them it was time to leave, but this year the only information they received was via local media. The flames came within a few feet of the home’s back deck. 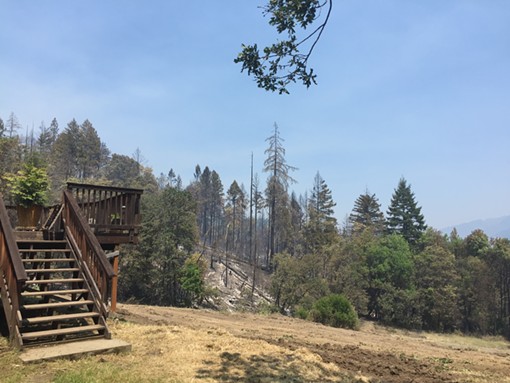 The sheriff’s office confirmed that they issued a mandatory fire evacuation for Lower South Fork Road north of Big Slide Campground to Manzanita Ranch on Wednesday June 10, two days before the incident. The normal procedure, a spokesperson said, is to notify the area via press release or, when possible, use a reverse 911 call. If all else fails they will visit a residence personally, with the help of Forest Service law enforcement officers, but with rural homes this can be a challenge.

Wilford said that the crew’s actions were made with the best information possible, and that the team had no way to anticipate the sudden shift in winds. If the backfire had not been lit, he says, the initial wildfire would have jumped the road anyway, with similar results.

“Basically, they made a very bad decision to light a burn out during afternoon winds," she said. "We are not unique. The Forest Service is not working with local communities or communicating with local people.” 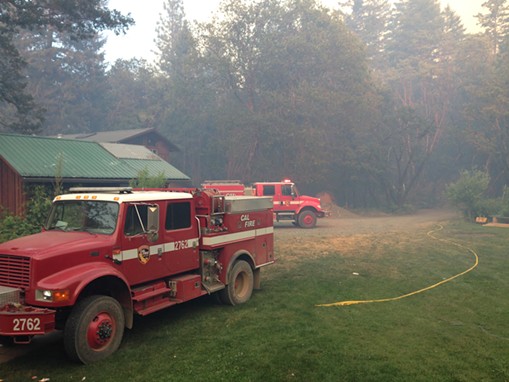 Soon after the incident, the Forest Service had hosted a community meeting in which close to 100 people showed up; several locals expressed their opposition to the operation. A smaller crowd of 40 to 50 people attended a later community meeting, which Wilford said was more “subdued,” and that people expressed more happiness with the firefighters.

“It’s normal for people to feel stressed out when the fire first begins,” Wilford said.

Meanwhile, Collins said that he is seeking compensation for the 150 acres of timber that burned in the fire. There is legal precedent for landowners whose property has been damaged in wildfire suppression, including a 2014 case in which 150 property owners sued the state of Washington for failing to contain the 256,000 acre Carlton Complex Fire.

As this post went live, the Saddle Fire was 90 percent contained. Hyampom Volunteer Fire Chief Joe Watkins was one of several locals who expressed their gratitude for the incident team. He said that the team in place was “very experienced” but couldn’t have anticipated the sudden shift in the wind.

“These guys are doing their damnedest to stop this thing, none of it was intentional,” said Watkins. 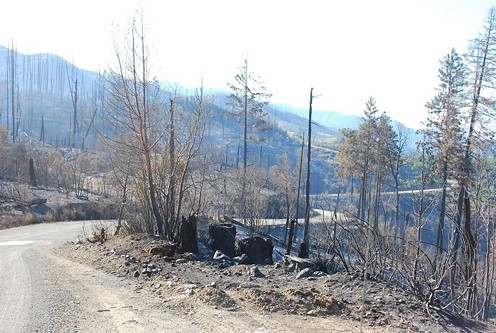 Editor’s note: This story was updated from a previous version to correct the amount of acres burned and the date of the first community meeting.