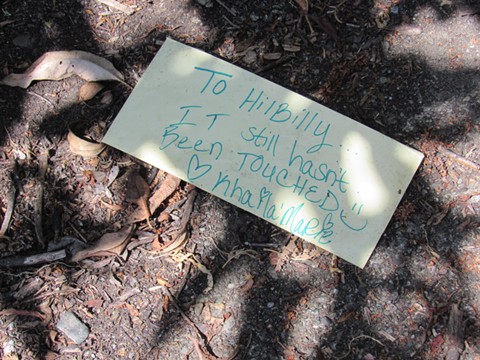 The Eureka Police Department has confirmed that Kenneth Eldeen, who was found unconscious in the encampment behind the Bayshore Mall on June 24, died from an overdose. His death was originally deemed suspicious because of an alleged altercation Eldeen had with another marsh resident earlier that evening. Eldeen, nicknamed "Hillbilly" by his friends, was originally from South Dakota. One fellow camper said he was "jumped for not even six dollars." But Sgt. Ernie Stewart of the Humboldt County Sheriff's Office says that Eldeen's death is one of many he attributes to a regional epidemic of drug-related fatalities.

"Humboldt County is being overrun with illicit drugs, and it's getting worse in all facets," said Stewart.

On 06/24/15 at about 8:53 p.m., the Eureka Police Department responded to the Palco marsh area for the report that a man in his 40’s was unconscious and needed medical attention. The man, later identified as Kenneth Eldeen, 46 of South Dakota, was transported to the hospital and pronounced deceased by hospital staff.

Due to the unknown circumstances surrounding the death, a suspicious death investigation was opened. An autopsy was performed and the Corner has determined that the cause of death was overdose. No foul play was suspected.

An unresponsive man found in a tent north of the Bayshore Mall last night died after being transported to the hospital, according to Eureka police. Kenneth Lee Eldeen was found by medical personnel and police officers who were called to the area around 9 p.m.

A press release indicated that investigators were treating Eldeen’s death as suspicious, and that several people who resided in the greenbelt area near where Eldeen was found were interviewed. Police Sgt. K. Howden told the Journal this afternoon that the death could be "medical in nature" and an autopsy is scheduled. She added there is nothing to indicate that residents should be concerned for their safety.

The Humboldt County Coroner’s Office has released the identity of the man who was found un-responsive in the green belt area north of the Bay Shore Mall on the evening of 6/24/15. The decedent’s name is Kenneth Lee Eldeen. His next of kin have been notified by the Coroner’s Office. The circumstances surrounding this un-attended death are still under investigation.

On June 24, 2015 at 2053 hours, the Eureka Police Department received a cellular call from the marsh area, commonly referred to as the Devil’s Playground, that a man in his 40’s was unconscious needed medical attention. Officers were sent along with medical personnel. Officers located an unresponsive man and immediately began CPR. The man was transported to Saint Joseph Hospital where he received medical treatment. The man, who has yet to be identified, was pronounced deceased by hospital staff.

Due to the circumstance surrounding his death, investigators were called and began a suspicious death investigation. Several people were interviewed in order to gain a full understanding of the events that took place leading to the man’s death. An autopsy will be scheduled by the Coroner to determine the cause of death.

Anyone with information concerning this incident should call or come to the Eureka Police Department. The number for Criminal Investigations Section is (707) 441-4032.