Camp On, Camp Off 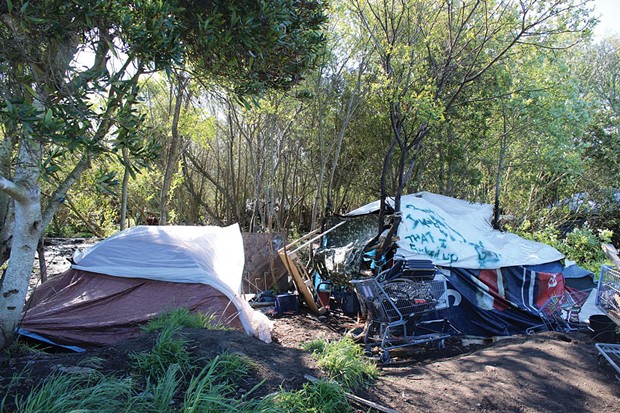 Police Chief Andy Mills denied Monday that his department is wholly scrapping plans to create a temporary city-sanctioned campsite for Eureka’s homeless. Instead, Mills said, the plan has been put “on a back burner.”

“We ran into several issues with oversight and funding. Unfortunately, this is just one of those deals where it’s tough to get it done effectively,” said Mills. In previous presentations to the city council, Mills has said that while the issue of homelessness is a societal problem rather than a police problem, he supports a temporary sanctioned camp to alleviate the negative impacts of illegal camping and provide a safe place for the city’s homeless.

Eureka Community Development Director Robert Holmlund confirmed that he and his department are continuing to search for a place for a sanctioned camp, and are currently in dialogue with the California Coastal Commission about some proposed sites.

“We’re committed to ending homelessness in Eureka,” said Holmlund. “It’s not an easy task. We’re doing the best we can with the resources we have.”

Holmlund said that his committee is evaluating a number of different criteria for the proposed site, including ease of access, neighborhood and environmental concerns. The amount of people to be accommodated by the camp is open to negotiation, he said. Previously members of Affordable Homeless Housing Alternatives (AHHA) had offered support for oversight of camps, but balked at the idea that camps might accommodate 100 to 300 people. Twenty-five people per camp would be a more manageable size, according to Nezzie Wade of AHHA.

Whatever the eventual size and location of the camps, Holmlund said oversight should be provided by an outside agency, saying that city workers don’t have the necessary experience.

A temporary “sanctuary camp” is crucial to the third step of a four-part strategy developed by Mills and city staff. “Operation Clean Sweep” would initiate the removal of homeless people from existing camps, sending them to a sanctioned camp before they were housed using the rapid re-housing model a city consultant, Focus Solutions, determined is the best solution.

Mills and Holmlund have both said that while the search for a camp site continues, more energy is being focused on implementing the rapid re-housing model, specifically the repurposing of the Multiple Assistance Center. As of July 1, Mills said, the center should be able to accommodate 40 individuals, but could expand to meet the needs of up to 100.

For the time being, Mills said his officers will not be issuing citations for illegal camping, will not be “clearing out” entrenched encampments such as the one behind the Bayshore Mall, and will be contacting individuals on a complaint-driven basis, or for specific issues such as drugs, weapons and violence.

In a phone call, City Manager Greg Sparks expressed a more cynical opinion about the sanctuary camp model. Although he declined to quantify how much staff time is being put towards finding a site, he stated that the idea has been greatly "de-prioritized" and that the temporary camp plan has been effectively removed from "Operation Clean Sweep." He also said that the city would become "much more aggressive" with the cleanups, working with the Sheriff's Work Alternative Program to make weekly visits to entrenched illegal camps. Although SWAP and city employees will not be taking down tents, occupants would be served notice three days in advance of these camp cleanups, be told to pack up and move, and that any belongings left behind would be disposed of.

Mills said that he is continuing to research evidence-based practices that have been proven to be effective against homelessness. The rapid-rehousing approach “does seem to have a lot of impact,” he says, but the jury is out as to whether it reduces the overall homeless population. Other proposed solutions, such as sanctuary camps and the tiny house village AHHA has suggested, may not have a body of evidence to support the cost of creating and maintaining them, but Mills indicated there may be a gap between philosophy and strategy in this case.

“How do you put a cost on a humanistic approach to people, to human dignity?” he asked.