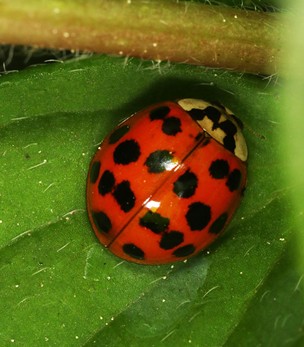 Male Ladybugs must have a hard time of it. The familiar orange, black spotted beetles are represented by both sexes. Without a great deal of technical knowledge and a good strong hand lens, you're unlikely to tell the difference. While insects don't seem to mind what we humans call them, from time to time I have heard folks make some egregious errors regarding them. One of the worst is the confusion between members of Coccinellidae (the family of ladybugs) and Diabrotica undecimpunctata, the Spotted cucumber beetle. I bring this up because once upon a time in a nursery I couldn't contain myself and had to tell a guy the truth about the green beetle with black spots. He had been authoritatively telling customers that the green ones were “man bugs,” and good for your plants. As Mark Twain said, “It ain't what you don't know that gets you into trouble. It's what you know for sure that just ain't so.” 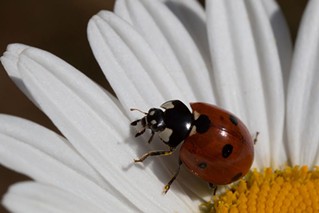 That cucumber beetle is a well known agricultural scourge, while the vast majority of the over 5000 different species of coccinellidae are beneficial predators of aphids and other small crop pests. You can even buy them to release in your garden as a biological control for aphids, scales and other small garden nuisances.

Adding to the confusion the ladies are not “bugs” in the technical sense. Hemiptera or “true bugs” are a separate order altogether from the coleoptera (beetles), as different from them as dragonflies or cicadas. A slightly better name might be Lady Beetles, Ladybird Beetles, or something altogether different that does not assign gender or inappropriate taxonomy, but for now I guess they're just going to have to endure.