This wasn't a work commute, but a "fun" ride to the Humboldt County Cornhole Association's annual tournament. I mention it to show that a.) I am not a complete wimp; b.) to exhort the wonderfulness of the Hammond Trail.

What a grand thing, to have most of our excursion taking place via a path that's both beautiful and safe. Where can we get more of these, Humboldt?

If a safe, separate bike route existed, riding a bike from Manila to Eureka would be no big deal. As it is, the bridges prompt heart pounding both out of fear – the car that speeds by at 60mph close enough to touch – and because the view of the bay expanding outward in both directions is an affirmation of the beauty that surrounds us lucky Humboldtians. I can feel the joy bursting from my chest! Or maybe that's just the result of pedaling uphill.... 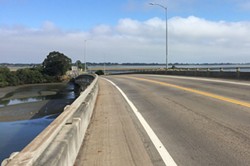 Several years ago, I was returning home to Manila in my car and happened upon the immediate aftermath of a vehicle vs bicyclist collision. The woman cycling had been struck by the side mirror of a truck as the driver swung too sharply to the right. Despite her helmet, she suffered head injuries, among others, and I saw her again at a public meeting held to address bicycle safety in the aftermath of Greg Jennings' death. (Jennings was bicycling home to Blue Lake Monday evening after work, on Highway 299, when a pickup drifted onto the shoulder and struck and killed him. More here.)

So yeah, concerns are not unfounded. 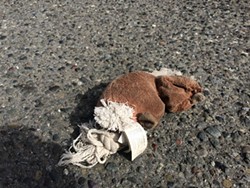 In fact, I also surf and have witnessed a great white attack from 30 feet away – but chances of an ugly encounter are far greater on my bike with a car than on my surfboard with a shark.

But today's pedaling journey involved only one sketchy moment and was otherwise easy-peasy, a little effort on the uphills, fun blasts on the downside of the bridges. I arrived in Eureka with time to change into my work clothes – which reminds me, here's a question for you regular bike commuters: At what point do you wear bike gear and bring stuff to change into? Fully suiting up with the puffy pants and such to hop over the bridges feels kind of silly – I look like I'm on a serious mission – but cycling in my work clothes seems gross because sweat, ew.