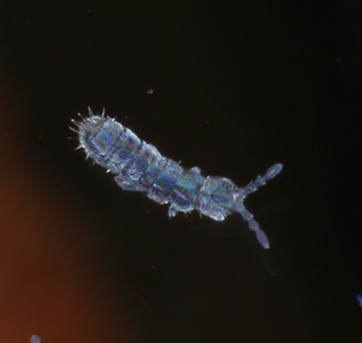 If you have sharp eyes or good glasses, pick up a potted plant and you might see a tiny gray thing, not much larger than the period at the end of this sentence, scurry away or even leap. This particular kind of critter has been hiding under rocks for a very long time. These are springtails (Collembola).
They were once considered one of the most primitive orders of insects, but modern taxonomists elevated them to sub-class status along with two other groups which form the class Entognatha. The fact that they are no longer classed with the insects does not seem to bother them at all.

An early Devonian (400 million years ago) fossil from Scotland is said to closely resemble several modern species. According to Wikipedia, it is the earliest known terrestrial arthropod fossil (an excellent article if you enjoy some of the most confusing taxonomy I've encountered). These are creatures of the cool damp places, under things, in leaf litter, and I have even seen them skating on the surface film of water. They breathe through their skin. Due to their tiny size and unobtrusiveness they are often overlooked, yet common species might be some of the most numerous animals on the planet.

They are not a threat to your aunt Polly's prize petunias even though they can become pretty numerous. They are known to be omnivorous and pretty much harmless, carrying no known diseases and with only a few species doing damage to anything humans might be interested in. They seldom need to be “controlled” with cyanide, a 10-pound hammer, or any other “nuclear option.”

They are called Springtails due to a unique anatomical development. A lever projects from the tip of their abdomen and is held underneath pointing toward their head. When threatened, the “furcula” snaps downward propelling the animal violently up and away. It wasn't until I digitally developed several extremely magnified photos that I saw some of them have amazingly intricate patterns and pretty iridescence and are more than tiny gray or brown specks scurrying around the drainboard of my outside sink.