City of Eureka Cancels Contract with Chamber of Commerce 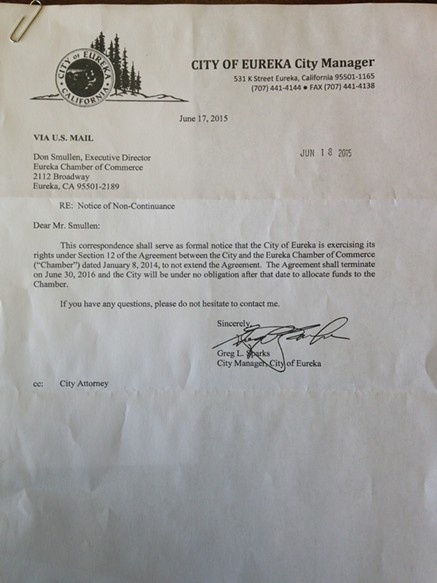 The Eureka Chamber of Commerce recently sent out letters to its members announcing that its contract with the city had been canceled. As of July 1, 2016 the chamber will no longer receive city funds.

Neither City Manager Greg Sparks nor Chamber of Commerce Executive Director Don Smullen was available to speak on this story, but City Attorney Cyndy Day-Wilson did confirm that the decision was part of Eureka's ongoing budgetary woes. The city recently tightened its belt to compensate for a $4 million shortfall, eliminating funds for some fire and police services, increasing zoo fees and reducing funding to both the chamber of commerce and the Humboldt County Convention and Business Bureau. Funding to the chamber's Visitor Center was slashed by 20 percent as of July 1.

In its letter, the chamber says it is reviewing its services from "top to bottom" and asking members to rank their importance. To continue the visitor center without city funding would cost $125,000 annually. The center, located on Broadway, provides information and brochures for out-of-town guests and future residents.