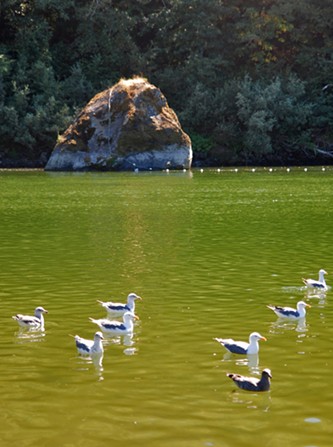 As if enough hard feelings didn't exist over Klamath River water rights, the Office of Special Counsel, the federal agency in charge of researching claims put forth by whistleblowers, has directed the Interior Department to determine if millions of dollars meant for environmental restoration were instead used to benefit farming and ranching interests.

A press release from Oregon Wild notes that two biologists for the Bureau of Reclamation came forward to accuse the agency of illegally spending nearly $70 million in their dealings with the Klamath Water and Power Agency, an association of Klamath project irrigators. The biologists pointed to a 2008 contract to pay for a feasibility study for fish and wildlife, and purchase water "for the direct benefit of fish and wildlife habitat." The five-year study has since been amended 17 times and extended to 2023, at several time sthe original cost and with no reported progress to date. Instead, the whistleblowers argue, the contract became a fund for the Klamath Water and Power Agency to pay for office space, salaries, fringe benefits, equipment and travel, as well as to fund pumping groundwater to farms during drought years.

Read more here. Meanwhile, the Bureau of Reclamation is seeking input on the environmental statement for a long-term plan it is currently drafting to protect salmon in the lower Klamath. The bureau is hosting a meeting beginning shortly, at 5:30 p.m. today, at the Red Roof Inn, 4975 Valley West Blvd in Arcata.For more information on the plan, visit the bureau's page here.

And, for more info on current Klamath conditions, read our full story in this week's print edition.