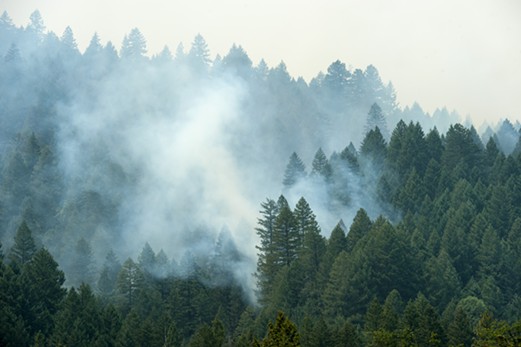 As fires rage in Mad River, Happy Camp, Gasquet and along State Route 36, state and federal agencies are scrambling to get boots on the ground. Firefighters and support personnel arrive at the local airport every day, to spend the night in Eureka before heading out to the fireline. The problem? Many haven't been able to find a place to stay.

According to Peggy Lawrence,spokesperson for Six Rivers National Forest, few of the hotels in the Eureka area that meet federal guidelines for reimbursement (safe, clean, working smoke alarms) are willing to offer room rates that match the rate for reimbursement, which tops out at $109 a night. Lawrence said hotels across the country are aware of the government rate and usually offer it to federal contractors upon request, but many Eureka hotels are charging tourist season rates, which sometimes exceed $200.

Lawrence said that tribal casinos have been an exception, offering rooms at a discount rate when they are available. The Red Lion has also set aside a block of rooms and its conference room for firefighters. Forest Superintendent Merv George has signed an order allowing an exception for current personnel, and is currently in talks with Humboldt County Supervisor Estelle Fennell and the Humboldt Lodging Alliance to address the problem. Meanwhile, at least one firefighter spent the night on the floor of park service headquarters before heading out to the front.

"I keep hearing from employees that they’re having a very difficult time finding lodging in the Eureka area at the per diem rate," said George. "It’s becoming an issue. We're looking at what might be a very long fire season."

In a phone call, Fennell confirmed she had spoken to a Eureka city councilmember and members of the Humboldt Lodging Alliance.

"It's a very big logistical challenge on both the state and federal side," said Fennell, who recently visited an incident command base in Redway. "It's tough because there are so many fires out there."

Around 3,000 firefighters are currently combating the fires, which have been burning over a week following lightning strikes in Eastern Humboldt and surrounding counties. Of the 70-plus initial fires, seven are still burning. Fennell said both state and federal resources are stretched thin. For up-to-date fire information and comprehensive maps, check out coverage on Kym Kemp's blog, found here. For an in-depth look at the agencies and personnel who fight fires, check out this Journal story from June of this year.


Here is the fire update as of yesterday, courtesy of Six Rivers National Forest Service:


EUREKA, California, August 6, 2015 – Firefighters continue to battle multiple wildfires, sparked by lightning late last week, on the Six Rivers National Forest. “I am very pleased to announce we have over 2,000 people working on the fires on the Six Rivers National Forest. Due to the clear air yesterday, I was pleased to see the assistance our firefighters got from the air tankers making drops on the fires. This allowed our firefighters to make progress toward containing these fires” said Merv George, Jr. Forest Supervisor.

• Gasquet Complex – Gasquet Ranger District: There are six active fires for a total of 1,000 acres with 2 percent containment and 310 personnel assigned to the incident. The Bear Fire has burned 180 acres; the Coon Fire, 255 acres; the Peak Fire, 250 acres; the Summit Fire, 5 acres; the Williams Fire, 200 acres; and the Feeder Fire, 110 acres.

Warmer and drier weather is expected today, with a possibility of scattered thunderstorms today and Friday. These conditions typically lead to an increase in fire activity.

Yesterday, good progress was made with line construction which secured portions of the fires in the complex. Additional crews and equipment have been ordered and are arriving at the incident command post.

Closures: Due to ongoing fire suppression activities, closure orders have been issued for the Bear Basin Butte Lookout and surrounding area, the forest is asking for the public’s cooperation to stay clear of South Kelsey Trail, Summit Trail, Gunbarrel Trail, and the Gasquet-Orleans Road at the gate.

• Orleans Ranger District: The district has seven fires. The Wooley Fire has burned 7 acres and is 100 percent contained. Smoke jumpers hiked out to the Wooley Creek Trailhead today. The Nickowitz Fire is 210 acres and 45 percent contained. Crews continued mopping up today along FS Road 14N02 and building an indirect line from 14N02 at drop point 1 down the ridge to Nickowitz Creek. The Sawtooth Fire was confirmed at 1 acre today. The fire is held up in the rocks with only one smoke showing in the fire. Acres burned for the Rough and Creek fires are unavailable at this time.

• River Complex – Lower Trinity Ranger District: There are five fires in the River Complex which is burning on the Shasta-Trinity and Six Rivers National Forests. The complex acreage is 10,912 acres and 1% containment with 515 personnel working the fires.

An inversion layer remained over the fire throughout the day. Dense smoke in the fire area helped to dampen fire growth today. Firefighters worked on establishing an anchor point in the SW corner of the fire. Crews began working on hand line moving north along the west flank of the fire.

Three portable Rural Area Weather Stations have been placed throughout the fire area to provide update to date weather information for firefighters in the field. The stations are the Iron Mountain Lookout, Lone Pine Ridge and Trinity Village. Data from these stations can be found on the website at www.srh.noaa.gov/gis/kml/raws/rawsLink.kml

Resource advisors (READs) are providing advice to fire managers on the nature and location of natural resources in the fire area with the goal of minimizing the impacts of fire suppression activity. The READs access and identify archaeological sites and endangered species in the area. In addition, they are working to identify locations to draft water from the rivers in locations which minimize impacts to water quality and fishery resources.

The Hoopa Valley Tribe will celebrate its 27th Annual Sovereign Days on August 7th, 8th and 9th at the Hoopa Neighborhood Facilities. Team PIOs will have a booth to provide information about the River Complex.

Evacuations: Evacuations remain in place for communities in the New River drainage north of Trinity Village.There is a mandatory evacuation of the Denny, Dailey, Hoboken and Bell Flat areas, due to increased fire activity and limited resources to provide structure protection. A hard road closure (no travel, including residents) is in effect on Denny Road, at the junction of Forest Road 7N26, at Onion Saddle.

The Lassic Fire in the Mt. Lassic Wilderness, has not crossed Blanket Creek on the north side. Helicopters were able to fly yesterday, assisting firefighters in containment efforts. The Lassic Fire was spreading in all directions, so fire crews assessed the area and begin constructing fire line west and east along the southern edge of the fire. The Gobbler Fire has not crossed the Van Duzen Road on the southwest side and continues to back slowly downslope on the northeast side toward Forest Road 1S06. Crews are concentrating their suppression efforts on the north side by constructing dozer lines and developing plans to prevent the fire from spreading further north.

Crews are making good progress on the north side of the Pickett Fire. The fire has not reached Highway 36. Firefighters are protecting structures along Highway 36 and in the community of Forest Glen. Crews are focusing firefighting efforts on the south by constructing dozer and hand line to limit spread. Two residences and two outbuildings have been confirmed as structures burned.

Public Meetings The Mad River and Route Complexes will hold a meeting on Friday, August 7, at 6:00 pm, at the USFS Ruth Guard Station (19500 Lower Mad River Road) near the Ruth Store for local residents only. On Saturday, August 8, at 11:00 am they will hold an open public meeting in Mad River at the Lambs Christian Center on Forest Route 1, Mad River, CA which is outside the closure area.

Swayback Ridge: A precautionary evacuation advisory, which is voluntary, was issued for residents in the Swayback Ridge area.

Ruth Lake: Residents around Ruth Lake are under a mandatory evacuation. The evacuation includes Lower Mad River Road (County Road 501) from Highway 36 to the Three Forks Road and the southwest side of the lake from Ruth Zenia Road north to the Ruth Dam.

Van Duzen Road: Residents along the Van Duzen Road from the dump south to the intersection of the Ruth Zenia Road are under an advisory evacuation.

Road closures: Highway 36 is under a hard closure from the junction with Lower Mad River Road east to the community of Forest Glen. The Van Duzen Road is under a soft closure (residents with IDs allowed to travel), from Browns Canyon Road south to Ruth Zenia Road. The Lower Mad River Road, from the junction with Highway 36, is also under a soft closure.

• Route Complex – Mad River Ranger District: The fires of the Route Complex have burned 14,709 acres with 10 percent containment and 420 personnel assigned to the complex.

On the north side of the Complex, the Johnson and Blake fires are expected to combine together with crews working to secure the west side of the fires. The Hitchcock Fire is joining the south end of the Johnson Fire where a dozer line is being constructed to tie in with the South Fork of the Trinity River. Crews are working to secure the Chance Fire to the north of the Blake Fire. Firefighters continue to make progress securing the upper east portion of the Kerlin Fire, located north of the Johnson Fire.

The smoke from the numerous fires burning throughout the region has led to air quality warnings being issued for both Humboldt and Trinity counties.

Warmer and drier weather was over the fires today, with a possibility of scattered thunderstorms by Friday. These conditions typically lead to an increase in fire activity.

Road closures: Forest Route 1 remains closed approximately 5 miles north of Highway 36 at Forest Service Road 2N12. Van Duzen Road is closed to non-residents, from Browns Canyon to junction with Ruth-Zenia Road (Co Rd 502). Highway 36 is closed on the east side at Forest Glen, and on the west side at Lower Mad River Road.

Smoke has decreased visibility across the forest. Smoke conditions may limit visibility on local roads and highways. Motorists are urged to use caution when travelling in the forest due to the smoke hazard and the potential of firefighters working along the roadways. For air quality information and specific advisories, visit www.ncuaqmd.org.

USDA is an equal opportunity provider, employer and lender.