On the XP: Local Families Take A Historic Ride Across the West 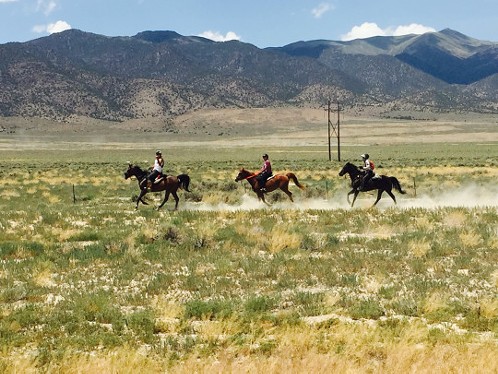 The Pony Express occupies a relatively small window in American history, but an outsized place in Wild West mythology. The mail service, in which riders carried messages via horseback for 1,800 miles from St. Jackson, Missouri to Sacramento was only in existence for 19 months — from April 3, 1860 to October 1861 — before being usurped by the modern marvel of the telegraph. It is credited with linking the then brand new state of California with the rest of the country. A good rider could gallop the distance in just 10 days, changing horses every 15 miles.

Today the trail is part of the National Park Service's trail system, and endurance riders take it at a slower pace. Four teams from Humboldt County recently completed the trail over the course of eight weeks, averaging about 50 miles a day. The XP, as it's known colloquially after the brand that once marked the flanks of Pony Express horses, still exerts a pull on the hearts of many.

Katie Azevedo, of Arcata, shared a horse with her mom Linda for the ride. While some equestrians compete for time, Katie said that she was more motivated by the opportunity to bond with Linda and get a unique perspective into the region's history.


"My mom, I think she’s a genius," says Azevedo, who traded off driving duties with Linda, following the trail on adjacent roads. Driver and rider would meet up at night, finding one another using GPS. "She did most of the navigation, which is tricky when there's no cell service."

Azevedo added that their horse, Sedona, performed very well despite challenging circumstances. The riders had a real glimpse into the dangers of frontier travel.

"Wyoming has the craziest weather; it never does what it says it’s going to do," she says. "Once a tornado almost touched down. Things were going sideways. It was scary. There were some late rains that turned the dirt roads to mush. We were actually stranded twice in Wyoming."

The riders ended their journey in Carson City, Nevada. The original route went over the Sierra Nevadas into California, but that stretch of the trail has been largely paved over. Azevedo says the trip was a great experience to share with her fellow Humboldt equestrians, and a rare one. The current organizer of the endurance rides, XP Rides, may soon shift its focus to only offering shorter rides along only portions of the trail. Getting permits to ride the entire length of the trail has proved to be time-consuming.

Azevedo and her fellow riders have chronicled what might be the last full ride of the XP on a blog, which you can find here.