August 10, 2015
comment
Third District Supervisor Mark Lovelace announced this afternoon that he will not seek re-election in 2016, giving credence to rumors that had been circulating for weeks. It appears he will finish out his term.
Several weeks ago Lovelace told the Journal he hadn't come to a decision yet, and that he hadn't anticipated making one so long before the election. He also lamented the expanding life of the election cycle, apparently referencing Rex Bohn's July campaign announcement, a full year before the next election. "I’ll just say that it’s worrisome to me and disappointing that we’re getting to a place in Humboldt County that political campaigning goes on all through the term," Lovelace said. 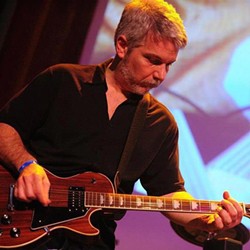 Meanwhile, Humboldt Bay Harbor, Recreation and Conservation District Commissioner Mike Wilson announced he will run for Lovelace's position in 2016, with Lovelace's endorsement. See both of their press releases below.

Also on the harbor front, Commissioner Aaron Newman did not file for re-election. Newman pleaded guilty to poaching charges last year after being arrested by Fish and Wildlife on suspicion of illegally obtaining hunting tags and misusing abalone tags. He is serving three years of probation. Newman did not immediately return an email seeking comment on his decision.

Newman's decision not to run again extends the filing deadline for the harbor district's division one commissioner seat until Wednesday at 5 p.m. So far, Larry Doss and James Roberts have submitted candidacy paperwork, according to the elections office. UPDATE: Hezekiah Allen has also filed candidacy paperwork for the seat.

In the Second District, Nick Angeloff and incumbent Greg Dale have filed paperwork. In the fifth division, Susan Rotwein and Kyle Visser have filed to run against incumbent Pat Higgins.

3rd District Supervisor Mark Lovelace announced today that he will not seek re-election to a third term in 2016. “It has been an honor to represent the 3rd District for the past six and a half years. I’ve enjoyed the work and I’m proud of what we’ve been able to accomplish together, but it’s time for me to move on.”

Lovelace was first elected to the board in 2008 after many years of civic activism on local issues including land use and planning, affordable housing, economic development, active transportation, natural resources and environmental concerns. He is perhaps best known for his leadership role in creating Arcata's Sunny Brae Community Forest.

As supervisor, Lovelace advocated vigorously for policies to support local businesses, protect our environment, maintain working landscapes and enhance our quality of life. Voters re-elected Lovelace in 2012, with over 67 percent of the vote.

The Board of Supervisors has changed dramatically during Lovelace's tenure. In 2008 the Board had a combined institutional memory of 54 years. In 2013, after turnover in all 4 of the other districts, Lovelace became the senior member of a board with just 8 years combined experience.

Lovelace is proud of the roles he played in a long list of important issues for Humboldt County and the North Coast, including:

Providing reliable broadband for Humboldt County and laying the groundwork for service over Highway 299.

Pushing for removal of the four lower dams on the Klamath River, including testifying to the Senate Energy and Natural Resources Committee in Washington DC.

Securing the County's long-sought right to 50,000 acre feet of water from the Trinity River.

Advancing the statewide discussion around regulation of marijuana, including drafting policies for the California State Association of Counties and the development of a regional policy statement for Humboldt, Mendocino, Del Norte, Trinity, Sonoma and Lake counties.

Working with Green Diamond Resource Company, the Trust for Public Land, state agencies and funders to establish the 1,000 acre McKay Tract Community Forest.
Reviving the Coastal Counties Association and organizing a successful joint workshop between coastal counties and cities and the Coastal Commission, which led to real reform in the Local Coastal Plan process.

Development of a $1 million incentive package to recruit additional air service to ACV.

“Though I’ll be leaving public office, I’ll continue to stay involved in County issues, just as I did for many years before running for the Board,” said Lovelace. “There are many ways to contribute to this community. Serving in public office is just one of them.”

A 47-year-old environmental engineer who grew up in Humboldt County, Wilson has represented the Third District for more than nine years as Commissioner for the Humboldt Bay Harbor Recreation and Conservation District. As Harbor Commissioner, he has worked for policies that balance economic development with ecological preservation. “I’m always looking for a balanced approach and practical solutions,” said Wilson.

“I enjoy working hard on projects and policies that I believe will improve people's lives," said Wilson. “A healthy, abundant and accessible bay is just one part of the success of our community.”

Supervisor Mark Lovelace believes Wilson has the experience and understanding of the issues to best represent the Third District. “I'm pleased that Mike Wilson is willing to step up to the challenge, and I'm confident in his ability, if elected, to work with the other supervisors to make Humboldt County an even better place to live."

Among his proudest accomplishments as Harbor Commissioner are shepherding the cleanup of four million gallons of toxic waste at the former Samoa pulp mill, supporting sustainable job growth in the local aquaculture industry and helping to oversee the financial stabilization and revenue growth of the district.

“To prepare for the future, a multitude of employment, housing, transportation, energy, environmental and food security issues need to be addressed, and we need to plan for and adapt to climate change,” said Wilson. “We also need to respond and manage the rapidly changing landscape of the cannabis industry, which is having profound impacts on our environment, economy and culture. “

“Wilson is credited with an ability to transcend the political differences that can often stall progress on important issues in Humboldt County. When I look at the work he’s done at the harbor district, I’m very impressed by how he has been able to work with a broad political backgrounds effectively to create a district that prioritizes economic vitality while taking care of the environment,” said former Arcata City Councilmember Alex Stillman.

“Mike is probably one of the smartest people I know when it comes to the process of getting things done in government,” said fellow Harbor Commissioner Greg Dale. “He listens to all points of view and is very efficient in getting down to the salient points that need to addressed to accomplish a goal.”

Wilson also serves on the boards of the Redwood Region Economic Development Commission and Workforce Investment Board, as well as Friends of the Dunes, and is known for his advocacy for the Humboldt Bay trail.

In addition to his public service background, Wilson will bring professional skills as an engineer and business owner to the board of supervisors. He has co-owned his own firm, HWR Engineering and Science, since 1994, having a hand in such signature projects as the UIHS Potawot Health Village, the Indian Island Cultural and Environmental Restoration Project and the Humboldt Bay Nature Center. “I understand planning and design processes. I’ve managed employees and I have overseen large, multifaceted projects.”

“Mike is refreshingly forthright about his views and is able to really take in other viewpoints and ideas. I think his professional engineering, planning, project management and commissioner background will be valuable on the board,” said Stillman. “I’ve always been impressed with his abilities and I think we’d be well represented having him as our supervisor.”

Wilson lives in Arcata with his wife and two daughters.