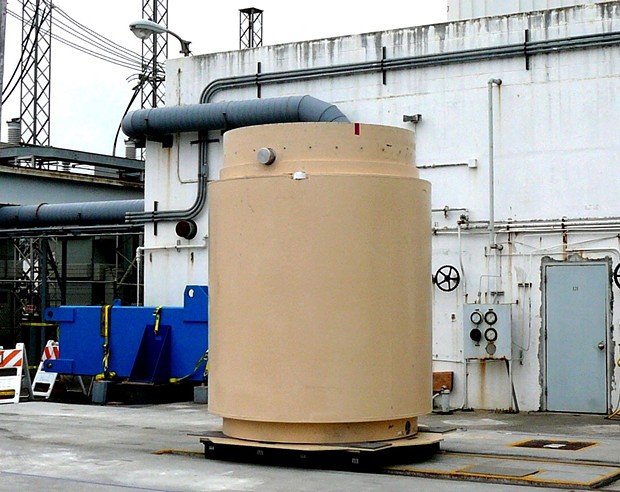 Tucked near King Salmon, the Humboldt Bay nuclear power plant’s been shut down since 1976. It is part way to burial but, like rust, it will never sleep.

In a PG&E-sponsored Aug. 19 “open house” in Eureka, utility staffers were supposed to update the community on the nuke plant’s progress toward decommissioning. The event left many befuddled. PG&E made no presentation, so community members couldn’t hear the utility’s update, then feed off of each other’s knowledge in a group question-and-answer session. Loren Sharp, PG&E plant manager, declined to hold an open session for all.

Instead, the utility took a page from a public relations’ manual, using tactics from what PR people call the “10 Ds.” Those start with “deflect, deny . . .” and include “dividing” communities interested in a particular issue. Instead of addressing the crowd of about 50, PG&E offered one-on-one, semi-private sessions, pairing one staffer with each person who had a question. Many attendees, including Eureka City Manager Greg Sparks, ended up wandering through the Wharfinger building wondering just what sort of questions they should be asking PG&E staff.

Unlike the rest of the community, though, Sparks said that when he does come up with questions, he has a straight phone line to call and get answers from the utility.

Some who did have their questions prepared were disappointed.

“They got their answers down pat,” said Cutten resident Ed Dickinson. “They're telling me that they're building a 40-foot-high berm to protect the site from tsunamis.” But, he added that 40 feet above sea-level still appears to be in the tsunami warning zone.

At this point, PG&E plans on leaving all the high-level radioactive waste on site at the edge of the bay and in close proximity to three earthquake faults. Scientists estimate that spent nuclear fuel (plutonium) has a "half-life" of 24,000 years. That means that half of its toxic radiation is expected to expire by year 26,015.

While the high-level waste remains, there's less low-level radioactive waste now than when the plant shut down, said PG&E’s Sharp. He added that about 1,000 dump truck-sized loads of soil have been removed and sent to a facility in Idaho, with another 4,000 truck-loads expected to be dug up and disposed.

While some of the Wharfinger wanderers, like Arcata resident Jean Nobel, were concerned about monitoring soil removal for releasing radioactivity into the environment, others noted the three pesky earthquake faults near the nuke plant. The closest, the Buhne Point Fault, surfaces only 300 feet away. An earthquake that splits open radioactive waste containment would launch radioactivity into the atmosphere, where it would likely be deadly.

“It's an incredibly seismically active area,” said Kate Huckelbridge, California Coastal Commission senior environmental scientist by phone. Despite following decommissioning closely for the state, she said PG&E hadn’t notified her of its public update meeting.
The coastal commission is permitting the plan to restore the site to environmental acceptability. But, Huckelbridge said, PG&E has yet to address several of the state's outstanding questions on how to finesse that restoration.

Then, there's sea level change. Sea-level is expected to rise up to 4.7 feet in the area in the next century, according to PG&E. “Humboldt Bay is more susceptible to sea-level rise than elsewhere on the northern coast of California,” according to PG&E.

The radioactive waste is now stored 44 feet above the Bay, according to the coastal commission. So, long before the radioactive waste loses its toxicity, it could be underwater due to sea-level rise. The coastal commission also noted that the waste storage area “would be subject during a tsunami to wave energy from both incoming and retreating waves, which could result in substantial erosion and damage.”

Decommissioning doesn’t come cheap. According to recent figures from the state, Humboldt's decommissioning trust fund is at least $292 million short of what it will cost to finish the job.

PG&E forecasts full decommissioning will cost $983 million, although some think that number is too low. The utility's already spent $545 million, according to California Public Utilities Commission spokeswoman Terrie Prosper. The trust fund set up to pay for burial had only $146 million left at the end of 2014, noted Prosper.

Despite that apparent shortage, there will be enough money to finish the job, said Sharp. Any shortage would be added to monthly bills under the line item “decommissioning.”

The Humboldt nuke plant cost $60 million to build, and PG&E originally estimated it would cost $166 million to decommission.

When finished, “the site will have more natural areas than existed onsite before the start of decommissioning,” Sharp noted in a July 9 letter to the Coastal Commission. Decommissioning has included transferring spent fuel from the reactor to concrete casks. Cask storage is considered a safer method of temporary radioactive waste storage than leaving it in a pool of water in the reactor vessel. In his letter, Sharp noted that decommissioning has been “complicated and challenging.”